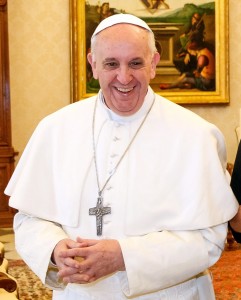 When Jorge Mario Bergoglio received sufficient votes in the 2013 conclave to be elected pope, he was hugged by his friend, Cardinal Claudio Hummes, who told him, “Don’t forget the poor.” So, he chose the name Francis, in honor of St. Francis of Assisi, to remind himself always of the poor. And since then he has worked hard to remember the poor (e.g., appointing a hands-on papal almoner, building showers for the homeless in the Vatican, etc.)

Pope Francis once again reminded the world not to forget the poor the other day, when he said in a speech that Christians ought to venerate the poor by kneeling when a poor person enters a church:

He [Pope Francis] concluded his address by saying how much he wished that the city of Rome could shine with the light of its compassion and its welcome for those who are suffering, who are fleeing from war and death,  and respond with a smile to all those who have lost hope. Pope Francis said he wished for the same on the part of the Church community in Rome so that it may be more attentive, caring and considerate towards the poor and vulnerable and recognize in them the face of our Lord. How I wish, he said, that Christians could kneel in veneration when a poor person enters the church.

I was not surprised that this suggestion was not warmly welcomed by comfortable American Catholics in my Facebook newsfeed, but I was shocked by the outright hostility to the idea of kneeling before a poor person—some (Catholics!) suggesting that this would be idolatry, that we should kneel only to God, and that we should not “romanticize” the poor.

Let’s talk about romanticism, shall we?

To romanticize someone or some thing generally means to see it in a pure state, detached from reality. This can be done with persons, with things, and even with beliefs or ideals.

For example, let’s say you are a Catholic who believes in the Incarnation of Jesus Christ, and who is ready to leap into the fray to defend the Church when it is accused of idolatry for having statues and for encouraging veneration of those statues—and of the holy people they represent, including Christ, who we are called to see in his friends. If all that you do is argue with Protestants over who is right on the issue of the veneration of holy things and holy people—if you argue in the abstract, detached from the reality of putting into practice that for which you are arguing—then all you are doing is romanticizing your principles. You do not hold those principles, they hold you.

You have to go further. You have to live out your principles, and put them into action in the circumstances that arise in your life. Remember when you learned math? You didn’t learn to memorize multiplication tables merely so you could show off your mad skills at reciting your times tables up to the twelves. You memorized them so that you could apply the principles of arithmetic to higher forms of math throughout your life.

The same holds true with your Catholic faith. You don’t learn to defend the veneration of statues and the holy people they represent just so you can crush your Protestant opponents and show off your apologetics wizardry. You put the principle to work in your own life. Which means that when the Pope says he wishes that you would kneel before a poor person when that poor person enters a church, you can grasp exactly what he’s saying: That Christians should see the suffering Christ in the poor person who enters a church and be willing to kneel as quickly as they would if the Blessed Sacrament were being carried by in procession.

He who will not kneel before a poor person will not see in that poor person the God who “emptied himself, taking the form of a servant, being born in the likeness of men. And being found in human form he humbled himself and became obedient unto death, even death on a cross” (Phil. 2:7–8). Because it was precisely in the form of that humble servant that “God has highly exalted him and bestowed on him the name which is above every name, that at the name of Jesus every knee should bow, in heaven and on earth and under the earth, and every tongue confess that Jesus Christ is Lord, to the glory of God the Father” (Phil. 2:9–11). 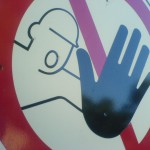 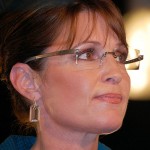 April 29, 2015 Sarah Palin, Toni Morrison, and Jesus
Recent Comments
0 | Leave a Comment
Browse Our Archives
get the latest from
Michelle Arnold
Sign up for our newsletter
POPULAR AT PATHEOS Catholic
1