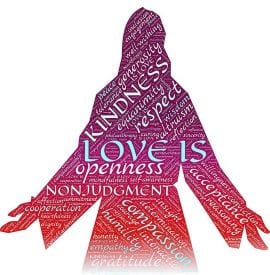 When I was preparing to write a booklet for Catholic Answers on New Age beliefs and practices, my editor had a concern to share. He wanted me to be careful not to “humanize” New Age practitioners as I’d tried to do in my earlier booklets on witchcraft and Judaism.

What he meant by this directive was that he didn’t want me focusing on helping readers understand why non-Catholics believe as they do; rather, he wanted me to focus on Pure Apologetics™—in other words, the doctrinal differences between orthodox Catholicism and New Age spirituality. The Important Thing was to demonstrate why New Agers were Wrong, not to invite Catholics to understand how they viewed the world and why they believed as they did (as I’d attempted to do in my previous booklets on witches and Jews).

Now, to be fair, this expectation wasn’t entirely unreasonable. In a short booklet of twenty questions and answers, which was part of a larger series intended to equip Catholics with bite-sized Q&A explaining Catholic belief on a variety of subjects, it makes sense to focus on why Catholics believe as they do and not on why non-Catholics believe otherwise. This approach is very sensible on topics such as God, the Eucharist, Scripture, and prayer. But there are drawbacks when the same template is applied to discussion of the beliefs of non-Catholics. All too often a narrow focus on why non-Catholic beliefs are Wrong (and Catholic beliefs are Right) leads to judgment of and contempt for non-Catholics as persons.

Do you think I exaggerate? Allow me to share a couple of examples.

A couple of months ago, I noticed a popular Catholic social media pundit claim on Twitter that the founders of Black Lives Matter were “Marxist witches.” This person had picked up this claim from right-wing media outlets, a claim repeated in conservative Protestant and conservative Catholic outlets. I’ve provided links to examples of the story as it appeared in right-wing media and conservative Christian media, but let’s turn to a more measured consideration of the story, as it appeared at the site for the Berkley Center, a religious think tank affiliated with Georgetown University:

Melina Abdullah, chair of the Department of Pan-African Studies at California State University, Los Angeles, and co-founder of BLM–LA [Black Lives Matter–Los Angeles], opened the event explaining that while the movement is a social justice movement, it is first and foremost a spiritual movement.

As each name is recited, Dr. Abdullah poured libations on the ground as the group of over 100 chanted “Asé,” a Yoruba term often used by practitioners of Ifá, a faith and divination system that originated in West Africa, in return. This ritual, Dr. Abdullah explained, is a form of worship.

In addition to rituals such as this one, outrage has been generated over interviews with BLM leaders. In this profile (also from an outlet attached to a major university), co-founder Patrisse Cullors is described as “deeply committed to incorporating spiritual leadership.” She “grew up as a Jehovah’s Witness, and later became ordained in Ifá, a west African Yoruba religion. Drawing on Native American, Buddhist and mindfulness traditions, her syncretic spiritual practice is fundamental to her work.” Ms. Cullors sees the fight for Black lives as “a spiritual fight.”

Okay, so what’s the problem, you might ask. Sure, these practices and influences are non-Christian but why are they looked upon with horror by conservative Christians, including conservative Catholics?

Conservative Christians were clutching their throats because they interpreted the rituals and beliefs described here not just as non-Christian but as occult. It should be noted that this was how the story was framed in the conservative media outlets that were carrying the story. The BLM activists were described as “practic[ing] ‘witchcraft’ and summon[ing] dead spirits.” That claim was accepted uncritically by fundamentalist Christian pundits who treated the story as “proof” that BLM activists shouldn’t be trusted.

But those who were passing around this story didn’t know the first thing about witchcraft or occult activity. In fact, when I challenged one of them to answer a few basic questions on witchcraft, answers that could have been obtained by a few minutes of googling, that person was appalled at the very idea of googling for information on witchcraft—even as a means of demonstrating sufficient knowledge to accuse other people of engaging in witchcraft. Indeed, I was treated scornfully for suggesting that even having such knowledge could be helpful.

Recently, a second example of this kind of disparagement devoid of knowledge caught my eye. Priest blogger, Fr. John Zuhlsdorf published a question from a reader who had bought an icon of Our Lady of Perpetual Help from “an esoteric new age shop [sic].” The reader considered the find to be a “rescue” but asked, “Do I have to fear that there are any demonic attachments to that icon—given the place where she [the icon] has been?” Zuhlsdorf called in a “guest priest/exorcist” who claimed, without any substantiation, that the icon should be exorcised and destroyed. But Zuhlsdorf’s guest priest didn’t stop there. He said:

Often Catholic images sold in such stores are made with nefarious intent and cursed. This is an old tactic that began in Cuba with Africans who pretended to be Catholic and associated various saints with their own demons [emphasis added].

I have to admit that I was so enraged by this casual bigotry from a priest that I had to wait a week before I could write calmly on the subject.

This priest is describing men and women, brought over to the New World from Africa as slaves, who generally had little or no choice about whether or not to become Christian, as “pretend Catholics” and “demon” worshippers because they infused their Christian practice with the pre-Christian indigenous beliefs and customs they’d managed to retain.

King Haakon of Norway is remembered as The Good because he melded indigenous Scandinavian customs into Christianity, thereby making Catholicism attractive to the Vikings. No one suspects there might be “demons” attached to Yule logs or that swags of greenery that are now a cherished part of Christmas throughout the West might be “cursed.” No one suspects Haakon of having been a “pretend Catholic.” But this priest advised that an icon of Our Lady of Perpetual Help be “exorcised and broken, burnt, and thrown in a river” because it was found in a “New Age shop” and might have some connection to African Catholics (which, by the way, is not indicated at all in the original question).

Which brings me back to my original point: narrow focus on why non-Catholic beliefs are Wrong (and Catholic beliefs are Right) leads to judgment of and contempt for non-Catholics as persons. In the case of the BLM activists’ spiritual beliefs and in the case of the icon found in a New Age shop, there was no consideration given to the persons involved. The activists were dismissed as “Marxist witches” based on how their actions were framed by political and religious opponents rather than on their understanding of their own experiences and beliefs. The presumably non-Christian shop owner’s connection to occult activity is entirely unknown and cannot be ascertained, but that didn’t stop a priest from assuming (without offering any evidence) that the ancestors of Black Catholics in Cuba were “pretend” Catholics.

This disparagement of non-Christians, especially when devoid of knowledge or respect for persons, is completely foreign to what the Church teaches about engagement with non-Christians. The Second Vatican Council taught that it was important for Catholics to “recognize, preserve, and promote the good things, spiritual and moral, as well as the socio-cultural values found among [non-Christians].” In fact, the Council fathers went on to say:

The Catholic Church rejects nothing that is true and holy in these [non-Christian] religions. She regards with sincere reverence those ways of conduct and of life, those precepts and teachings which, though differing in many aspects from the ones she holds and sets forth, nonetheless often reflect a ray of that Truth which enlightens all men (Nostra Aetate, cf. John 14:6).

When Catholics refuse to engage in the hard work of seeking knowledge of non-Catholics and non-Christians, in an effort to promote understanding and mutual respect among persons—when they focus exclusively on proving themselves Right and others Wrong—they risk snuffing out the light of Christ himself.

November 25, 2020 Scandal In an Age of Scandal
Recent Comments
0 | Leave a Comment
Browse Our Archives
Related posts from Michelle Arnold