Does blue-collar work have any meaning? 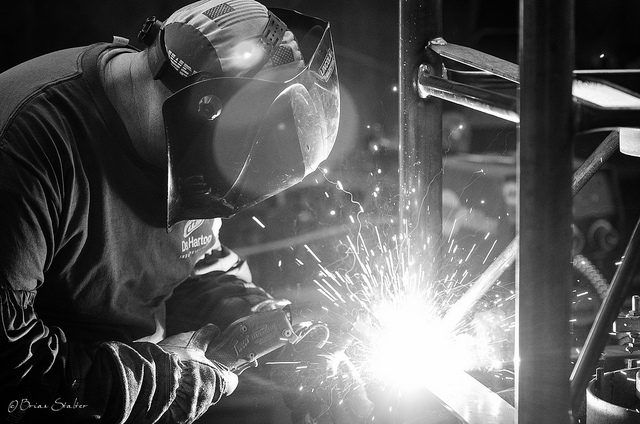 There was never a doubt in my mind that I would end up in the “white collar” world, at least from the age I got realistic about my future and stopped wanting to be an astronaut- firefighter-cowboy, either in turn or simultaneously.  As an adolescent, my favorite TV character was none other than Alex P. Keaton on “Family Ties.” For my thirteenth birthday, I asked for (and received) a suit and tie, because I wanted to present myself as someone who already lived in a white collar world.  While my grandfather wanted me to be a medical doctor, I decided instead to follow in his footsteps and become a pastor.

After successfully navigating the convoluted ordination process within the United Methodist denomination, I had the incredible opportunity to do just that.  And for a while, it was great.  I was good at what I did, receiving a great deal of affirmation from others.  It felt meaningful.  Not every day, of course, but most of the time there was a strong correlation between my personal sense of vocation and my gifts, allowing me to make a living doing something I believed was contributing value to the world.

In the particular role of pastor, I found it a nearly perfect mix of intellectual challenge, caring for people, and organizational leadership.  Pastoring a congregation is a great privilege, to be sure, but I confess that I did not really appreciate what I was getting myself into in terms of stress and conflict, and after a few years of wrestling with the pros and cons of staying in pastoral ministry, I decided to get out.   I don’t think I was totally naïve – I anticipated it would be difficult to get another job.  What I did not expect was going from the white collar to blue collar worlds.

While I expected to be able to find new work that built on my leadership experience and skills, in the summer of 2012, in the Midwest, there just were not many private employers looking for ex-pastors with master’s degrees from Princeton Seminary.  Instead, I found myself working in a factory on second shift for about 30% less than I used to make (after working a month for minimum wage at a local grocery store).  I dress for work now in my father-in-law’s old work clothes each day, leaving at 1:30 pm and getting home at 11:00 pm.

At first, I delighted in the change from ministry.  Working a blue-collar job had some distinct advantages, I found out right away. I worked set hours that didn’t change.   I was largely isolated from other people, spending eight hours daily with machines that didn’t talk back.  I was expected to keep track of how many good parts I produced, and there were all sorts of graphs and charts that told me how efficient a worker I was.  To be honest, learning a whole new skill set from scratch wasn’t bad for my ego either.  Ministry offered nothing comparable – there was no avoiding the people who didn’t like me (and to whom I still had to be their pastor), and there were no precise metrics for knowing if I was doing the job well or not.   But now, nearly two years on, I have learned that a 25 year career in a factory is not really a long-term solution for me.

On leaving my factory job behind after about two years, I have a lingering question about work and meaning.  Most of my co-workers there are relatively content spending their working years doing this kind of work, day in and day out – very few have any plans to leave.  Have they simply settled?  Or do they find a meaningful connection to their work?  Based on my limited anecdotal evidence, I think most do not find their jobs meaningful, but they never expected to in the first place.  For them, work is only a means to meet their basic needs and desires for leisure.  Their major sense of meaning is derived totally outside the workplace.

If I had been a pastor to my blue collar co-workers, I would have advised them generally not to get too tied up in an identity derived from their day jobs anyway, but rather to focus on doing a high quality of work and not to equate their jobs with their callings.  In the midst of my own foray into working the factory floor, I am now not so sure I would have found that very helpful to hear from my pastor.  It is surely easier said than done.

Whatever negative forces were at work to take me out of the white collar work of ministry, they couldn’t overcome the simple reality that I am not challenged at all in this work, and I want something more.  No amount of reminding myself that the products I am helping make in the factory really do make people’s lives better could sustain me over the long haul.  My brother actually put it pretty well when he told me that in this line of work, when I come home after my shift, I will never have the feeling of having done something smart – nothing I contribute to this job results from being a critical thinker.

So where can I go from here?  For me, that almost certainly means returning to the white-collar universe, if I can get my foot in the door.  Towards that end, I anticipate enrolling in the quintessential white-collar degree program this fall.  Yes, in my late 30s I am getting an MBA.  People regularly ask what kind of job I hope to have as a result, and frankly, I have no clue, as long it occasionally affords me the luxury of feeling like I did something intelligent with my day!

Larry Saunders served congregations in the United Methodist Church in Indiana and New Jersey for 14 years.  In 2012, he began working in the production process for surgical instruments and orthopedic devices, the major industry of Warsaw, Indiana.  In August, he will begin in the full-time MBA program at the IAE-Aix Graduate School of Management (http://www.mba-iae-aix.com/full-time-mba/) in the Provence region of France, and expects to graduate in 2015.  He’s looking forward to having conversations in French with his wife and daughters as they learn the language.

June 26, 2014 A shout-out to a blog you should be reading
Recent Comments
0 | Leave a Comment
"Amazing post thanksBest Leather Phone Cases"
seller actions Riverdance Changed My Life: Or, How ..."
"Thanks for sharing this nice postcustom software development"
seller actions How to Succeed as an Influencer ..."
"Thanks for sharing keep it upAmazon shipstation automation"
seller actions The Business Crisis Donald Trump and ..."
"There have been many studies about the best environments for work/creativity/productivity but management usually follows ..."
John Purssey Why I Don’t Like Open Offices
Browse Our Archives
Related posts from MISSION:WORK