Zero Dark Thirty: A Tale of Bias and Burqas

This post was written by guest contributor Emaan Majed.

The scene opens on a bustling Peshawar market. The street vendors peddle ripe oranges and bananas. Decorated rickshaws bustle through busy streets as Maya, the determined female protagonist of Zero Dark Thirty, makes her way to her destination. But in contrast to actual Peshawar markets, the only Muslim women on the movie screen are two briefly seen, unnamed extras wearing sky blue Afghan chadris.

The central narrative of Zero Dark Thirty surrounds the 2011 capture of Osama Bin Laden by a Navy Seal team. In this rendering the seal team is led to OBL by Maya, portrayed by Jessica Chastain. Maya and her colleagues go through many leads, breezily torturing each suspect until he breaks. Much has been said on the graphic torture of Muslim men the movie glorifies. But what most mainstream outlets and Westerners in general have ignored is the effect this torture has on Muslim women. The devastating effect the torture, capture, and murder of Muslim men has on their wives is overlooked by the movie and by the larger American foreign policy it emulates. The American military and government are eager to wage a war on terrorism in the name of women’s rights and show kindness to little girls whose fathers are suspects. However, their brutal treatment of Muslim men threatens the families and economic situations of many of those little girls by destroying their communities. Gayatri Spivak’s famous quote “white men saving brown women from brown men” is the framework this movie operates on, but it does not seem to realize that these white men are doing brown women more harm than good.

For a movie set in an Islamic republic, Zero Dark Thirty boasts a worryingly small number of Muslim women. In 150 minutes spent exploring Lahore, Peshawar, Rawalpindi, Abottabad, Northern Pakistan, and Kuwait, Muslim women are visible in 13 scenes, several of which take place at Osama Bin Laden’s compound as his wives protect him and are shot. The screenplay’s only acknowledgment of Muslim women’s existence is a CIA officer noting that “Observing Muslim females live with their families or with their husbands,” to explain why a third female in OBL’s compound is alarming. This brief dialogue serves only to back up the movie’s central belief that all the millions of Muslim women are one thing, and that one thing is oppressed by Islam. The few Muslim women that we do see serve to prop up Western constructs of Muslimahs. They function as background props and wives of extremists, and are used to establish a foreign, “other” setting. Nearly every Muslim woman in the movie wears some sort of head covering. This is in stark contrast to the real Pakistan, where you are as likely to see women with no head coverings on the street as you are to see hijabis, and where chadris and abayas are a rare spectacle. The sky-blue chadris seen multiple times in the movie would normally be observed only in Afghanistan, and while abayas are worn in Pakistan’s remote northern tribal areas, they are seen only sporadically in Peshawar, Rawalpindi, Islamabad, and Abbottabad. But for Zero Dark Thirty, one type of Muslim women, one understandable stereotype, is enough. It represents Muslim women not as the diverse plethora of people they are but as a monolith of suspicious, miserable, burqa-wearing abettors of terrorists.

This otherization of Muslim women as dangerous, suspicious and not to be trusted burqa-wearers is further cemented by the use of the headscarf in Zero Dark Thirty. One scene, also seen in the trailer, sees a suspected terrorist walking into a building where women in black abayas sit in the garden. Quickly, the figures in abayas pull out guns and corner the man, revealing themselves to be disguised soldiers. While these men are instruments of the CIA as opposed to al-Qaeda, they nonetheless further the idea that Muslim women’s clothing is a suspicious hiding place for violence. On a few occasions while in Pakistan, Maya herself dons a headscarf, presumably to match the standard decorum of women in Pakistan, regardless of the fact that the hijab is rarely a requirement for actual Pakistani women. One scene finds Maya coming home clothed in an abaya, which she promptly flips open when she is alone. The camera quickly pans to her beat-up Converse shoes, as if to reassure the viewers of her American-ness.

Despite all this, Zero Dark Thirty has been hailed as a feminist landmark. Slate magazine praised its director, Katherine Bigelow, as a “feminist folk hero”. Both Jessica Chastain and Katherine Bigelow have echoed decidedly feminist themes when promoting the movie, which features a strong female lead. It is in its supposedly pro-women defense, however, that Zero Dark Thirty’s imperialist undoing can be found. Bigelow, in an interview with Slate, discussed how Osama Bin Laden is captured by Maya, a “liberated Western women,” as though liberation is a phenomenon exclusively available to Western women. Zero Dark Thirty’s brand of faux-feminism espouses the erasure and marginalization of non-Western Muslim women, whom it regards as the oppressed counterparts of terrorists. It, in a none-too-rare action for western feminism of its kind, sacrifices the voices of Muslimahs at the altar of white women doing things.

The oppressive treatment of Muslim women is not restricted to Zero Dark Thirty this awards season. Argo is another movie centered in the Muslim world, focused on Ben Affleck rallying a team to carry out a CIA rescue mission in 1979 Iran. Of three Muslim women appearing onscreen, only one, Sahar, the Canadian ambassador’s maid, is a notable character. Sahar has three lines but ensures the success of the American operation by leaking information about the hostages. Despite her refreshingly anti-terrorist leanings, Sahar is still regarded with wariness by the Americans and is initially thought to be a suspect. The suspicious over Sahar is due to her being an Iranian Muslim women, which to Argo and Zero Dark Thirty means being other, perilous, and unknown. Even in her heroism, she is portrayed as a dangerous Muslim woman “other.”

Zero Dark Thirty and Argo have twelve Oscar nods between them. There has been much heated discussion on their portrayal of Muslims and how much of it ought to be excused do to artistic message. In the end, though, their many accolades serve as one more example of anti-Muslim women dialogues in Western society being fervently rewarded. 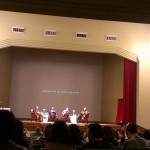