This post was originally posted at wood turtle’s blog.

The day my friend took off hijab was disappointing. While everyone was offering congratulations on the new look, I couldn’t help wonder if my friend was having a crisis of faith. And when I asked if everything was okay, I learned a secret truth that sent me reeling.

He never wore hijab in the first place.

Naive assumptions led me to stereotype my friend as the “type of Muslim” who sports a beard out of religiosity, modesty and a reflection of his spiritual commitment. But I can’t really be blamed for doing so, can I? He was president of the Muslim Students’ Association, led prayer, gave the occasional khutbah, took religious courses, and embraced being a recognizable Muslim.

And while his beard changed shape over the many years of our friendship — from a sleek Hollywood beard to a goatee and back again — it just seemed like a natural assumption that his beard was worn to follow the Sunnah. If he was outwardly “religious” in all other aspects of worship, shouldn’t his beard be a reflection of his inner hijab?

Nope. I was absolutely guilty of stereotyping a person based on their visuality.

It turns out he grew a beard “because.” Just because. Because he could. Because it was stylish, comfortable for his skin and something guys did. I imagine having a beard also helped my friend gain some kind of authenticity at the mosque and within the community — even though that probably wasn’t his intention in wearing one. And as he didn’t wear it out of religious motivation, shaving it off was no big deal.

In fact, after speaking to several colleagues with various opinions and styles of “beard,” it seems like any sort of facial hair, or lack thereof, can exist without much commentary from others.

Sure there are naseeha-concerned-advice-giving-types who correct people on prayer, police women’s clothing and comment on beard length — everything from “that beard makes you look like an extremist” to “it is haraam to keep a cleanly shaved face.” Some experience extreme social and family pressures regarding the hair growing powers of their beard follicles, or are shunned outright by communities for having baby smooth skin. And the stereotypical image of a bearded Muslim is often used to incorrectly represent extremism, terrorism, and overall make things very difficult. With grave seriousness, having a long beard is sometimes grounds for being insulted, harassed and viciously attacked.

Have pity on those poor brothers, because you know they can’t control themselves. Veiled rape threats people. Right there. 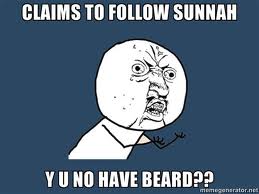 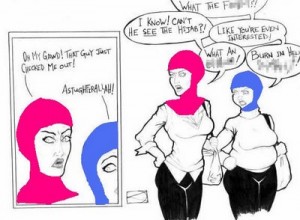 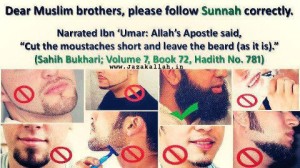 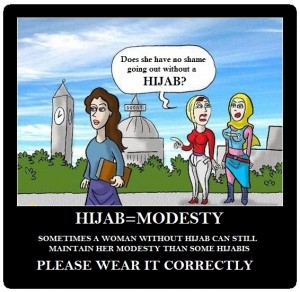 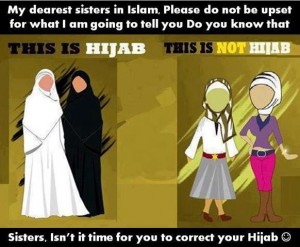 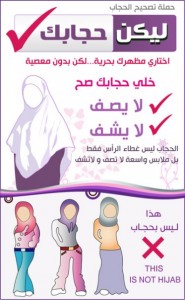 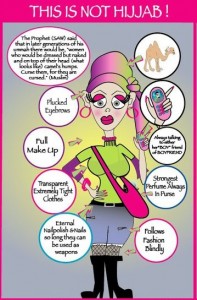 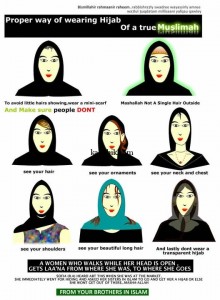 There are literally only 10 images targeted toward men and countless images for women (you can find more here, here, here, here, here, as well as the brilliantly offensive devolution of modesty). And then there’s this masterpiece from YouTube:

Beards are awesome. Beards fight cancer. They have badass Hollywood buy-in. Beards look intelligent, manly, and cool. The worst out of the “proper way to beard” trend is a little guilt for not following the Sunnah. Where are the memes making fun of one’s God consciousness by measuring beard length? Where are the videos with Satan tempting a man to trim his beard closer to his jaw line? Where is the hellfire condemnation for stylizing facial hair?

[As an aside: Both men and women are commanded by the Qur’an to maintain their modesty. And while one, generalized understanding presents the beard as a “natural disposition” for men — separate from the requirement to cover their private parts — there is also the opinion that the beard is an important part of a man’s modest dress, or his hijab. So it’s not good enough to argue away the double standard in Internet memes by saying there are differences in opinion over the beard, because the same can be said about hijab. Besides, it’s not cool to comment on anyone’s hijab or beard. And really not cool to pretend to know how God will Judge anyone — especially in a cheesy Internet meme.]

In this online narrative hijabis receive the message that there is only one type of hijab and only a “true muslimah” wears it. Women who don’t wear the hijab aren’t even factored into the equation. They don’t register on the pious Muslim scale, except to slander and shame women who wear the “wrong” type of hijab.

Who is deciding what constitutes the “right” hijab and a “true Muslim woman?” According to more than one of the infographics, the judgement comes from our fellow “brothers in Islam.” Not scholars. Not women. Not God. It sets a dangerous precedent when men feel they can freely comment on and define women’s bodies. These memes and infographics are shared thousands of times over social media. They’re fun, fresh, snappy cartoons — reinforcing the message that women have no agency to decide what makes a good hijab for them, whether fully covered or not at all.

This proper hijab narrative completely sexualizes the headscarf and standards of modesty — turning fellow Muslims into slut-shamming caricatures responsible for the chastity of men. The additional unfortunate subtext of this trend, is that even when women wear hijab according to the requirements of the Sunnah, they’re still not covered enough. Condemned to hell via a whore/Madonna hijab dichotomy.

It would be so nice if people could practice their ideals of modesty without this guit, shame, and gender inequity baggage showing up on Tumblr and Facebook. To be modest and Muslim “just because.” Because it’s stylish or comfortable or just to create a personal connection to the Divine.

2 responses to “Beard Memes and the Proper Hijab Narrative”