Explosions, gripping fight scenes, artificial intelligence, funny one-liners, sexist playboy arrogance and close-ups of Robert Downey Jr.’s face overlaid with computer graphics are everything I expect when walking into an Iron Man movie. What I don’t expect are convenient and overused Hollywood tropes about Muslim women.

So now you know my guilty pleasure. I’m a science-fiction-superhero-action-film geek — and I frequent these movie genres in part to turn off my brain, enjoy some CGI eye-candy, and go fanatical over favourite characters and stories. And while I always secretly hope that films involving terrorists, vague references to Arabs, or locations in the Middle East will avoid using oft-repeated narratives that demonize Muslims, I’m still surprised whenever they pop up.

It’s frequently discussed on Muslimah Media Watch that Hollywood movies often orientalize or objectify Muslim women characters as marginalized props — creating scenes with women shrowded in black just to illustrate how “foreign,” “other,” or oppressed women are by the “bad guys.” These tropes conveniently justify all sorts of terrible actions by the “good guys” to save the day and liberate teh womenz.

Even when identified as essential to the plot, Muslim women are only given agency to play terrorists or victims of Islam and Muslim men. Rarely are they positively portrayed as strong, intelligent, amazing women. And when they are, they’re killed off. Like my all time favourite (and only) Muslim character in the television program Doctor Who — a fantastic woman who uses her enviable wit and intelligence to help the Doctor solve an essential problem. And then promptly dies at the hands of an alien monster.

Her role as a Muslim is to drive the plot by the virtue of her “Muslimness” and unwavering faith in God — a key clue in resolving the episode — making her fantastic character completely and utterly expendable.

Muslim women own about 20 seconds of screen time in the latest edition of Iron Man, during which they are nothing more than a convenient plot element.

Iron Man 3 picks up where The Avengers movie left off. After Loki’s failed attack on New York City, the United States is left vulnerable and now faces a new terrorist threat: The Mandarin. This anonymous terrorist hacks television signals to broadcast verbal threats and claims responsibility for several bombing attacks on military installations and personnel. The United States’ government-backed military responds by deploying “War Machine” — an Iron-Man-like-mechanical suit worn by the character Colonel Rhodes. We soon learn though, that he is re-branded, and the newly marketed “Iron Patriot” cavorts around the globe seeking out terrorists, delivering the government’s unwavering message of strength in this war against The Mandarin.

At one point, the military sends Iron Patriot to Pakistan to investigate a suspected Mandarin broadcast point of origin. After he breaks down the door to a sweatshop, we see a room full of women in black niqab working away at sewing machines. “Target not armed” flashes across one woman’s veil as he scans the room for weapons — objectifying her face into a convenient projection screen. Reporting back to his superiors, Iron Patriot jokes:

“Unless the Mandarin’s next attack on the US involves cheaply made sportswear, I think you messed up again.”

And to the women as they flee the scene:

“Yes, you’re free, if you weren’t before. Iron Patriot on the job. Happy to help. No need to thank me.”

Unfortunately for the Iron Patriot, among the veiled women is an actual female terrorist, who uses the anonymity of the veil to blend in with the other women. He’s quickly given a supremely harsh ass kicking, and is captured.

To make matters worse, some reviews of Iron Man 3 note that the film openly criticizes drone strikes, the war on terror and the military-industrial complex. So even though pains were made to poke metaphors at the current millitary actions of the United States, it seems that no one thought to use this as an opportunity to break down stereotypes and challenge status quo Hollywood representations of Muslim women.

I don’t think this is too much to ask for, especially considering the fact that actor Faran Tahir was successful in challenging an anti-Muslim script during the first Iron Man movie — changing it from having a group of Muslim terrorists kidnap Tony Stark to a group of “international mercenaries.”

Then of course, there’s the elephant in the room:

This scene does nothing more than support tired stereotypes of Muslim women. And if it was supposed to be ironic, making fun of American millitary intelligence and the current media construction of these stereotypes, it still failed miserably.

Now, does any of this really matter when action films and comics in general are sexist and objectify women indiscriminately?  What does it matter if Muslim women are pulled along for the ride?

Downplaying strong female characters and relying on Muslim women stereotypes is problematic not only because it help perpetuate negative attitudes and incorrect assumptions, but also because it alienates portions of the fan base. I may be a fan, and enjoy this media — but I can also simultaneously be critical of its more problematic aspects whenever they crop up. Just like other fans, I want to be able to see myself as a superhero taking down bad guys, flying the TARDIS, or piloting a starship. But when there is a concerted effort to erase or stereotype Muslim women, it hurts my geeky pride to see myself erased as well. 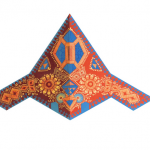 July 1, 2013
The Colourful Drones of Mahwish Chishty
Next Post