Effective Discussions on the Oppression of Women: Is the Burqa It?

For a few years now, I have been observing depictions of the veil, the niqab and the burqa, not only in the media but in pop culture. Muslimah Media Watch has written extensively about these depictions because they are so prevalent everywhere. Just last week, Nicole wrote about a controversial ad featuring a niqabi woman and a soldier. Similarly, as I have discussed in another post, niqabs and hijabs have made it to stardom through famous people like Lady Gaga and Madonna. We also see a tendency to use the niqab in artwork as woodturtle has explored. Yet, often these depictions do not result in any positive discussions about Muslim women’s rights.

Depictions of the niqab and hijab in artwork continues to trouble me perhaps because I have always seen museum-type art as elitist. Not everyone can afford to go to a museum, nor is everyone exposed to this “fine art”. I do not mean to undermine the importance of the fine arts at all; on the contrary, I have an artistic background myself. But I believe that along with appreciating art we should be critical of the processes that are involved in making it. In my own experience, artistic settings can be very exclusive. Not everyone is welcome and not everyone is deemed to understand (minimalist art anyone?). Likewise, not just anyone walks into the door and is received as an artist. One needs more than just talent to get into the “clique.” As an observer, the experience is quite similar, how many of us can be said to hang out with “intellectual” people who make and “understand” art?

But the political context is also important. For instance, growing up in Mexico, art was prevalent when centrist parties were in power despite other problems like corruption. The government funded cultural activities, subsidized museums (in most cases students and teachers could access for free all the time) and provided public spaces for emerging artists through a number of initiatives. However, these projects stopped being funded when conservatives came along, so many artists decided to appeal to the new government’s sensitivities and we saw a rise in commercial art.

So why am I telling you all this?

Last week my two friends and I decided to visit the Ottawa Art Gallery. The gallery is a huge building that keeps important pieces of art including Inuit art, modern art and classical fine art. If you ask me, it is by no means the best art gallery; it is a bit disorganized and the museographic work is poorly done in comparison to that of other museums. However, the best/worst moment was when we visited the Canadian Art section. Then I was faced with Colleen Wolstenholme’s burqa women…

My friends and I walked into the “Canadian Art Section” and were immediately faced with a dimly-lit room. The spacious room did not feature any other sculptures, making the room too big for the three half-size statues. Since the gallery does not allow photographs, I have included pictures from other sources.

The collection features three sculptures that are ¾ the size of an average woman to represent, what the artist considers to be, the ¾ status of Muslim women according to Shari’ah. I walked into the empty, dimly-lit room featuring these cement- burqa- women and I was immediately confused. In a museum where no other images of Muslim women are displayed and the last thing one expected was to see three ¾ burqa women, there was no explanation of the sculptures and a guard stood by door indicating that people should not touch or take pictures. When I finally found the information about the pieces, I felt even more uncomfortable. The plaque indicated that these sculptures were meant to add to the discussion on the oppression of women (not Muslim women, just women).

One of my friends (a Ghanaian girl) commented that it was obvious that the artist was white and Western. My other friend (a Tunisian-Canadian girl) felt uncomfortable because the images were so out of context that they perpetrated a stereotype instead of producing meaningful discussions. And I… I decided to write a post.

Reading a bit about the artist, I confirmed that she is a Canadian white woman, who has a whole set of mini-burqa-women. Yet, her work is described as “outlaw” and “critical.” The racial aspect mentioned by my friend was not to imply that Caucasian people do not get it (because many do) or that all women of colour get it all the time (because not everyone does). Instead, it was a comment on “whiteness” as privilege and the naïve notion that, somehow, “whiteness” stands against women’s oppression.

So I was left wondering… how critical is this? How critical is it to play with a stereotype and a limited understanding of Islamic law? How is it that women’s oppression is linked to the veil?

Then it hit me… this is what all the previously mentioned depictions have in common. They work with stereotypes and pretend to understand or explain something… But they bring no discussion. The discussion is shut down through a message that says “If you are a Muslim woman, especially one wearing the veil, then you are oppressed.”

So what entails an effective discussion on the oppression of women? Well, I think that depends on the particular communities. Yet, I can tell you, that three short cement women are not necessarily much of a discussion. It is a statement on what an outsider considers to be reality. 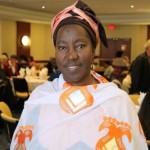 November 19, 2013
A Muslimah’s Guide to Rocking the World
Next Post

6 responses to “Effective Discussions on the Oppression of Women: Is the Burqa It?”