Mata Najwa: A Rare Glimpse of Real Journalism in Indonesia

Sometimes I don’t know where to start when it comes to critiquing Indonesia’s media, especially television programs. There is so much gibberish that comes out of the TV screen – and increasingly so – these days that sometimes I feel my head is heavy with rants after watching just one program.

Having seen so much disappointing content in the media, I found it extremely refreshing when my husband switched on the television a few nights ago and Mata Najwa was on. The program is a talk show hosted by Najwa Shihab, a seasoned anchor-woman who happens to be a daughter of one of my favourite ustaz, Quraish Shihab. While the profession of anchor-woman is increasingly becoming one of glorified pretty faces, and talk shows are turning into yet another venue for promoting narcissistic politicians and artists, Mata Najwa (which means “Najwa’s Eyes” in Indonesian) has maintained its quality journalism since it first aired in 2009.

I’m not a frequent TV-watcher, but whenever I happen to watch the show, I’m always impressed by Ms. Shihab’s critical, gutsy questions to her guests. Politicians, president-wannabes, lawyers, criminals – all sorts of people have sat across Ms. Shihab on the “hot seat” and felt the heat of her questions.

Take, for example, one of my favourite episodes of Mata Najwa, where the guest was Rhoma Irama, a controversial singer turned presidential candidate. In the past, Bang Rhoma – as he is frequently called – has irked women’s rights activists when he reprimanded singer Inul Daratista for her sensual dancing. He also aggravated many people, especially minority groups, when during the 2012 Jakarta governorial election he delivered a sermon at a mosque with racist comments against a pair of candidates. The night he was interviewed on Mata Najwa, facing Ms. Shihab’s sharp and inquiring eyes seemed to make Bang Rhoma feel it was necessary to wear his shades inside the studio. But shades and style notwithstanding, eight minutes into the fast-paced interview, Ms. Shihab’s razor-sharp questions were able to reveal Bang Rhoma’s unflattering side as an incompetent president-wannabe. Although it is apparent that Bang Rhoma tried hard to dodge Ms. Shihab’s questions throughout the interview, his guard started to crack after only seven minutes. Here’s just a glimpse of the interview (translated from Indonesian):

“I don’t, but those [politicians who support] me feel that way.”

“You are in agreement with those who express that opinion?”

“I don’t think it’s in my capacity to answer that.”

“But since you are expressing this, it means you are concurring with that opinion.”

For a program that is highly intellectual in content and low in entertainment aspect, it is encouraging that Mata Najwa has aired for almost five years. It signifies that in spite of the claimed high demand of no-brainer shows, a demand that TV stations frequently use to justify producing low quality TV programs, there is also room and a stable market for good quality journalism in Indonesia.

While she is the daughter of a very respectable cleric, Ms. Shihab also has proved to be a reputable journalist in her own rights. Watching her on TV last night, I was happy that young Indonesian Muslim women have a role model in the media who was intelligent, vocal and had strong Islamic roots.

Criticisms of Ms. Shihab most frequently focus on (surprise, surprise) her choice to not wear the hijab. A few examples of such criticism can be found here and here. When I compare this phenomenon to the overnight popularity of singers and entertainment figures who have just adopted the hijab, which they gained simply because of their newly chosen outfits, I find it ironic and somewhat disconcerting. I wonder if this excessive focus on how a Muslim woman is supposed to dress has diverted the attention of Indonesian Muslim community from nurturing deeper qualities such as intellectuality and critical thinking, the very qualities that make Najwa Shihab a Muslim woman to be reckoned with. 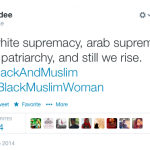