A group of Muslim Pakistani-American women are pushing the boundaries on how Muslim women are perceived, especially when it comes to the comedy scene. They say: “Nobody expects Muslim women to be comedians.”

Global life stories: capturing Muslim women’s lived realities is a project that reveals the striking disconnect between the juristic and legal constructions of gender roles in Muslim legal tradition and the lived realities of many Muslim women in Kuala Lumpur, Indonesia.

The Muslim Student Association of Notre Dame hosted an event, entitled “Understanding the Hijab,” to analyze hijab and how it’s perceived in Muslim and non-Muslim societies.

New documentary interviews 6 Muslim women dressed differently, but have the same message. The result is a vibrant collection of distinct voices.

Catherine Putz of The Diplomat comments on the post by Washington Post last week about a documentary claiming that sex workers in Tajikstan were wearing the hijab.

Who’s Afraid of the Hijab? A TEDx Talk by Kiran Malik Khan, a freelance journalist and poet, on her world and that of the Hijab.

Islamic Fashion’s Expanding Market Attracts Shariah Financiers in Malaysia. According to some fashion experts, this market is “extremely exciting and profitable.”

“I never fully believed that British Muslims were being victimized, but then I was stopped at Heathrow,” writes Hanna Yusuf. She says: “It’s so distressing when those who are supposed to protect you treat you like a criminal.”

Nadia Fawaz, of Arab News, writes about the rise of female DJs in Saudi Arabia and how the young girls are trying to find a new tune. 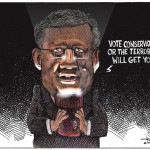 April 13, 2015 #ListenNotSave - Niqab in Canada
Browse Our Archives
get the latest from
Muslim
Sign up for our newsletter
POPULAR AT PATHEOS Muslim
1