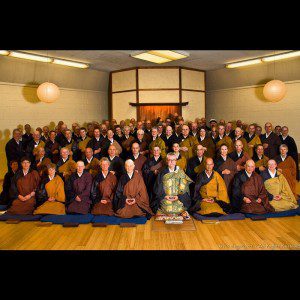 My flight out from Providence to Clatskanie, Oregon, where Great Vow Zen monastery is hosting this year’s gathering began to take on the character of a quest, with adventures, misadventures, and digressions. What is normally more or less a seven-hour experience turned out to be fifteen hours, counting the hour plus from the airport in Portland to the monastery. I’m recovering from a bout, mild, but a bout nonetheless of pneumonia, and not feeling totally up to speed. The trip out didn’t help. Although dinner with Gyokuko Carlson and Mary Mocine, two Zen priests and old friends, and then sleeping for seven good hours, not counting being awakened once to be told my luggage had arrived in Portland, and again when it arrived in Clastskanie, went a long way toward restoration. While I have a couple of parts in this year’s activities, I plan on taking it fairly easy, and absenting myself when I think I need to. That’s the plan.

There are a lot of misconceptions in the larger Zen scene in North America and environs about the various multi-lineage associations of Zen teachers. There are three organizations. Possibly the best known is the American Zen Teachers Association. While there’s no doubt many people want it to be something else, it is an annual gathering of teachers not only across lineages, but also across schools. Its members include Japanese Soto and Rinzai as well as Korean and Vietnamese lineages, and recently, I think the first teacher in a Chinese line was admitted. Nearly everyone is a convert, the vast majority of European descent. In addition to the annual meeting it sponsors a listserv. It has resisted all attempts to be more formally organized, beyond recently adding a requirement that members in addition to standing in a generally recognizable Zen lineage and having an extensive training background summarized through a minimum of about three hundred days of intensive retreat experience (nine or ten hours of meditation in each of those days), must now also belong to a group that has an actionable ethics code. As I write this the details of what this actually means are far from certain.

But there are also two other multi-lineage organizations, both coming out of the Japanese Soto lineage, which at this point seems to represent the larger majority of trained Zen teachers in the West. The Japanese Sotoshu Shumucho maintains a North American office and a gathering of priests. Nearly all, perhaps all Zen priests who are Japanese nationals belong to this organization, and a fair number of convert clergy, as well.

But, dwarfing that organization is the Soto Zen Buddhist Association, formed out of the realization that our indigenous convert community has many different needs than can easily be met by a branch office of a national church in another country, with its own priorities. Very few of the Japanese clergy belong to the SZBA, although nearly all the convert clergy do.

Unlike the AZTA, the SZBA has chosen to be activist in helping to shape the contours of a largely English speaking Zen community. While it is at this point in time an association of clergy, it is uniquely situated to be the seedbed of a denominational structure if the need for such an organization becomes apparent. While I love the AZTA, particularly for the great variety of Zen teachers, and the fact that among the Zen teachers few would be qualified to be credentialed in the organizations of any of the other teachers, it has set limitations on what it wants to be that I think are limitations on the sinking of deep roots for Zen in North America.

The Soto Zen Buddhist Association has taken the lead in a number of areas. In addition to providing that contemporary requirement a listserv for its members, a clear and actionable ethics code that touches all members, a public ceremony of reception of teachers, the Dharma Heritage ceremony, which is a North American equivalent of the Japanese Zuisse ceremony (two of the highlights of my life within the dharma have been participating in the first of these ceremonies, and at the 5th biennial gathering serving as the Doshi, or chief celebrant), it has also published various studies of aspects of what a Zen life in the Soto inheritance might look like in North America. Of increasing importance is dedicating time to memorialize those priests who have died in the previous year.

This, the 6th biennial gathering of the SZBA will mostly focus on a draft document outlining training expectation for all members. The document is the product of a great deal of work on the part of smart, informed, and dedicated Soto Zen priests. It is also controversial. While a large majority support the draft document, a significant minority have serious reservations, and a few have stated if it becomes the standard, they may have to resign. Good hearts all around, sincere dedication to the Dharma, and therefore not without energy. This year attention is also being given to a widely held concern about a religious response, and specifically a Zen Buddhist response to climate change, and two separate meetings are dedicated to that issue.

The gathering also features panels and talks, mostly generated from within, and a keynote speaker, almost always from the outside, and usually featuring an academic of note. This year the speaker is Dr Paula Arai, author of several important books on Zen. She is currently an associate professor at Louisiana State University. She will be addressing an aspect of the liturgical life in Zen, something less attended to in the west than in Japan.

And to conclude a few words of encouragement and caution from the remarkable Roshi Shohaku Okumura, a former bishop of the Shumucho who has also conspicuously joined the Soto Zen Buddhist Association.

October 3, 2014 LIVE BLOGGING THE 2014 SOTO ZEN BUDDHIST ASSOCIATION: Thursday
Recent Comments
0 | Leave a Comment
"I was always taught (since 1970) that in China, anyway, the five classic poses for ..."
Neva Trejo A Note on the Use of ..."
"A wonderful piece, James. I was recently sitting a week long thing, and two days ..."
Keith Angilly A Note on the Use of ..."
"Thank you, Mark."
jamesiford The Zen of Lewis Carroll: A ..."
"Thanks!"
Bob Evans Considering Universalism: The Secret Teaching of ..."
Browse Our Archives
Related posts from Monkey Mind