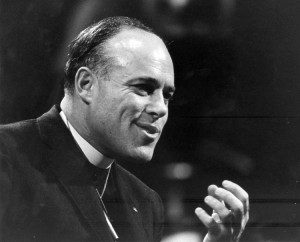 Malcolm Boyd was born on this day in 1923. He would have been ninety-three.

An Episcopal priest, he first gained public attention in the nineteen sixties as the “espresso priest” named for his participation in San Francisco’s poetic scene, frequently giving readings at the Hungry I, and later for his book “Are You Running With Me, Jesus?”

The first sermon I preached in a Unitarian Universalist church some thirty years ago was titled “Are You Running With Me, Buddha?” A small tip of the hat.

Father Boyd was an activist, particularly focused on the Civil Rights movement. There’s a small intersection with the Unitarian Universalist church in that while he was chaplain at Wayne State, he led a discussion group that inspired UU Viola Liuzzo’s journey to Selma and subsequent murder by the Klan. Boyd publicly acknowledged his homosexuality in 1977, and from then became a prominent voice in the Gay Rights movement.

He wrote some thirty books. At the time of his death he was writer-in-residence of the Diocese of Los Angeles. He was survived by his long time spouse, Mark Thompson.

A good life. Worth remembering…

June 7, 2016
A Surreal Sanctuary From a Broken World: Clifton's Cafeteria in L.A.
Next Post

June 8, 2016 The Gospel of Unitarian Universalism for Contemporary Culture
Recent Comments
0 | Leave a Comment
"The Friend speaks for me.Thanks for the life-long work that let you assemble all these ..."
Lisa Nelbach ANTICIPATING PASSOVER Four Steps to Freedom
"That looks very interesting."
Catherine TOWARD A SOULFUL ZEN A Review ..."
"What a lovely idea, Cushing!"
jamesiford The Zen Priest Shares a Small ..."
"Regarding your foregone latte, today I came across an interesting suggestion; In addition to flat-out ..."
cushing The Zen Priest Shares a Small ..."
Browse Our Archives
Follow Us!