A Very Small Eulogy for an Archbishop 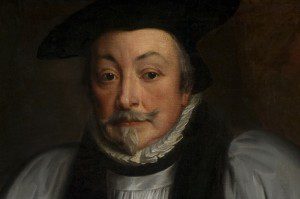 William Laud was born on this day in 1573. The Anglican communion dedicates the 10th of January, the date of his death (by beheading), as a feast.

William Laud eventually rose to the rank of Archbishop of Canterbury and was the close advisor to King Charles the first. What makes him important to remember is how he was central in the establishment of what would become the High Church party in the Church of England, and eventually the Anglo-Catholic movement. He is known for many things additionally, principally as a relentless enforcer of his reforms of the reformed church, which included active persecution of the Puritans. Along the way he made more than his share of enemies, and as the Civil War was warming up was imprisoned on trumped up charges by the Long Parliament. Finally, in the midst of the Civil War, he was executed.

On the plus side of the register in addition to liturgical reforms that laid the ground for the High Church movement, he actively encouraged scholarship within the church, and reached out to the Eastern Orthodox.

D. H. Pennington, writing for the Encyclopedia Brittanica summarized how “Laud was never much liked, even by his allies. A humourless, dwarflike figure, uninterested in court pleasures, unmarried, tactlessly impartial in his condemnations, he could never establish a party of influential supporters.” But added, “his devotion to a coherent purpose and his repudiation of hypocrisy, compromise, and corruption in allies and enemies of whatever class were rare and admirable qualities.”

I found it interesting that the Wikipedia article on the archbishop suggests his private diary revealed homosexual longings, which he never appears to have acted on. I’m sure the analytical can work with that small bit of information. A complicated man, no doubt.

Me, I find him an important, if difficult figure in the development of the Anglican church, stopping the slide into simply becoming another branch of the Calvinist church, and opening the doors that allowed a genuine middle way for Christianity – which as a follower of another middle way, makes me feel him part of the family of those seeking authentic spiritual paths through the dangerous currents of our lives. That he failed in many ways, and, into the bargain did bad things along that way, but at the same time set wheels in motion that have had good results says a lot about the mysteries of life.

So, rest in peace, archbishop. Good followed in your wake.

October 6, 2016
The Project of Zen is Waking Up
Next Post