Zen Buddhism: The Kind of Religion 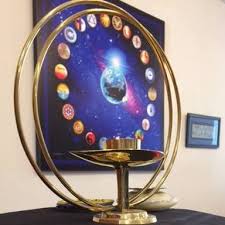 This past Sunday I have the privilege of being invited to preach at the Unitarian Universalist Community of Cambria. I hesitate to say how they received it, but, me, I had a great time. A wonderful community. If you ever find yourself on California’s central coast on a Sunday, I recommend a visit.

One thing that struck me was a picture on the wall behind the pulpit. It was a variation on a common image within UU communities. In this case a large image of the globe in front of the Milky Way. And then around it a number of smaller images reflection various religions of the world. It included the “flaming chalice” image that has become the logo for Unitarian Universalism. There was a small arrow pointing at it that had a text reading “you are here.”

And, it sparked a continuing conversation in my circles about whether Buddhism or more specifically Zen is actually a religion.

The first definition for “religion” in Merriam-Webster is “the service and worship of God or the supernatural.” However, it follows with a more vague “commitment or devotion to religious faith or observance,” And then for a second definition says “a personal set or institutionalized system of religious attitudes, beliefs, and practices.” And, finally, “a cause, principle, or system of beliefs held to with ardor and faith.”

Frankly, something of a mess. Good old Wikipedia begins the article one “religion” by asserting “There is no scholarly consensus over what precisely constitutes a religion.”

The etymology of the word is unclear. Probably it derives from either the Latin “lego” which seems to mean “to consider” combined with “re” to mean to “consider again.” Or, maybe from “ligare” which means “to bind.” And with “re” means “to bind back.” The word religion seems originally to be concerned with monastic vows.

The particular faith of Medieval Europe was not distinguished as one among many as in the “world’s religions.” Like fish swimming, Medieval Christians simply considered their faith the truth of things. Others were, well, others. Similarly in Asia the term “religion” doesn’t appear to have appeared before the modern era and in part through the European contact.

Religion in a sense we generally understand it as a descriptor for sets of beliefs and practices that might be called sacred seem to appear in the West in the seventeenth century. And it isn’t until the nineteenth century that the idea of “world religions” emerges.

Today “religion” is a catch all category to capture constellations of belief and practice concerned with meaning and direction. Usually these include supernatural beliefs. Broad families of belief can be distinguished, such as within the great trio of Judaism, Christianity,nd Islam as one, among Hinduism, Jainism, and Buddhism as another, and informing both Daoism and Confucianism as a third. This seems common to all regions. Pre-columbian Mesoamerican religions had common currents, and there are commonalities within the great diversity of traditional African religions. Just to start lists. People share thoughts and customs and their deeper beliefs. Although as they shift across cultures, the beliefs themselves take on new forms.

So,bottom line, the word religion attempts, if imperfectly, to capture the meta currents of our many thoughts about ultimacy.

As to whether Zen Buddhism is a religion, well; it is what you make of it.

One Zen teacher says no. Another gives a qualified response. Here several Buddhist argue about it. And of course they’re all right. From one angle or another. Although I personally favor Joan Suthernland’s suggestion Buddhism (and Zen) is “kind of a religion.”

My favorite of the various articles I stumbled upon in a simple search of the question “Is Zen a religion?” was this one by Dosho Port. When we start using the world religion there is an inclination to slip in some distance – to assume we’re talking about someone else. Actually we’re talking about the currents of our hearts.

And, for me, the questions of religion are the questions that drive my life. The late Unitarian Universalist theologian Forrest Church famously observed that religion births out of out twin knowing that we are alive and that we will die. It really is okay to reflect on the currents of religion abstractly – to notice things like families of faith, and whether there are larger currents. But. And. Bottom line. Religion is in fact about the deep matters of our human hearts. Religions address the why and the how of our lives.

That when we survey the world’s religions there are so many answers should give a person pause. But, also one can discern, if with difficulty, some commonalities.

What I find particularly useful about Zen in its Buddhism it posits what I find a truer analysis than most religions offer. It then offers some specific disciplines that I find amazingly helpful, like this, and this.

But, one needs to engage it all with caution. And, maybe a bit of humor. And, of course, deadly seriousness.

May 29, 2018
(Zen) Buddhists & the Unitarian (Universalist) Encounter
Next Post

June 1, 2018 Deep in Poop: Reflections on a Zen Koan
Recent Comments
0 | Leave a Comment
Browse Our Archives
get the latest from
Monkey Mind
Sign up for our newsletter
POPULAR AT PATHEOS Buddhist
1