Zen, Lists, and Finding the Heart of the World

Zen, Lists, and Finding the Heart of the World July 8, 2019 James Ford 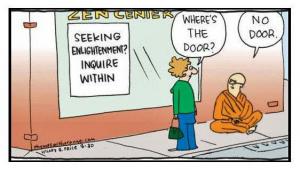 Zen, Lists, and Finding the Heart of the World

I was just reading the manuscript for a book coming out from Shambhala Publications. Naked in the Zendo by Grace Schireson. It’s really good. When it comes out, I recommend buying it. And, reading it. There’s something in it for the beginning Zen student and for the old hand.

She speaks in it of two kinds of Zen, “uptight” and “wild-ass.” And, then digs into what that can mean. This categorization touched my, as I’ve been thinking about differing kinds of Zen a fair amount of late. Certainly, this is nothing new. Among the first things I read about Zen was Alan Watts categorizations of “Beat Zen, Square Zen, and Zen.” Not all that long after I read the first English language introduction to Zen as an actual spiritual practice, the Three Pillars of Zen. And in it there’s a sermon riffing off of the ninth century Chinese master Guifeng Zongmi’s Five Styles of Zen.

So, there are a lot of lists of differing kinds of Zen. Mostly these lists point out mistaken perspectives on Zen before setting the reader straight on what’s the right kind. Fair enough. There certainly is a lot of nonsense and bother presented as Zen, which could use some correcting. If you doubt this and know anything of the subject just wander around some Facebook Zen related groups.

But as I was digging into Guifeng’s version for my book on koans, I realized that actually for the most part he didn’t appear to be making a lot of judgments, but rather pointing out there are legitimately different ways to engage Zen.

And in our times, I find myself interested in the range of Zens that are authentically on offer here in the West. Chinese hybridized with Pure Land Zen, Japanese derived Rinzai Zen, Soto Zen, Soto Zen with koan introspection, master Seung Sahn’s Japanese influenced Korean Zen, Korean Taego and Jogye Zens, Vietnamese master Thich Nhat Hanh’s uniquely hybridized Zen, as well as that from various other Vietnamese masters all flood into consciousness. One can claim one is more authentic than another, or truer, or more useful. But, these claims all have the feel of special pleading.

And, then there’s our contemporary Western Zen world. In addition to what one might usefully if only partially clump all these Zens together as religious Zen, there are a couple of others that have emerged. There’s a secular Zen, mostly following the lead of the former monk Stephen Batchelor and his agnostic and later atheist Buddhist perspectives. A lot of people attracted to Unitarian Universalism find resonances with Batchelor and Zen practices find something emerging that isn’t quite as secular as Batchelor’s, but definitely with a rationalist and naturalistic orientation. And, there’s Christian Zen.

Actually it was Christian Zen that was specifically in the back of my heart as I found this cascade of thoughts and feelings when reading Roshi Schireson’s two categories. While some might feel, and with some justification, that the Anglo-American Roman Catholic monk Thomas Merton was the “founder” of this school, the honor probably really belongs to a German Jesuit who spent the whole of his adult life in Japan, Hugo Enomiya-Lassalle. I believe he would become the first Christian to receive dharma transmission, authorization as a Zen teacher. But he would not be the last. According to my friend Stephen Slottow the current head of the Rochester Zen Center, Roshi Bodhin Kjolhede even describes this emergent Christian Zen a “third stream.”

So, I find a pause. First, based especially on knowing several Christian Zen masters I find I am compelled to accept them as part of the “family.” One, at least, a couple, may count among the wisest of Zen teachers in the West. And, me, while I think of myself as pretty mainstream Soto Zen with koans, well, I am a Unitarian Universalist minister, and I do largely teach from that rationalist and naturalistic orientation. Others have to decide on my legitimacy, but here I am. And, it forces me to wonder a bit what is it about Zen that can take on such kaleidoscopic shapes? And, if there is genuinely anything at the center of all of it?

For me the answer is a categorical yes. Or, okay, perhaps that’s a categorical no. Zen is, after all, all about awakening. And awakening in Zen is all about stepping beyond “form and emptiness,” and into a place of freedom within constraints.

And with that another question. Can there be a universalist Zen unattached to some specific tradition. For me it feels there’s a yes and a no in this. That’s not the same as those categorical yes and no of the true way. But, a yes with qualifications.

Elsewhere, I speak of Zen as “a tradition of understanding and practice, held together over time by lineage.” So, with that sense of understanding, of how we can be free within our constraints, there are also a cluster of practices, and a community of practice with a tradition of generally recognized teachers. I believe without these three things we no longer have Zen. And, I have to rush in with an assertion that the world doesn’t need Zen in particular. It’s just one of many ways human beings have awakened within this world. But, to my heart, it is astonishingly clear and with the best spiritual tool kit yet developed by humans. So, its loss, when in time that happens, will be a loss to the world. And, yes, it will happen by the nature of things, always in flux, always birthing, always dying. Part of the awakening thing, in case you missed it.

So, a Christian Zen must ultimately be a presentation of nonduality. Which is a minority view within the Christian world. But that perspective does exist and Zen fits nicely within that small substream. It is also a heart thing, which is often missed in the rationalist and naturalistic perspective. And it is a place which calls the rationalist inclined to the spirituality of Zen as well as its literature and style.

But, what I have seen when I meet people who practice Zen over time without attachment to some specific tradition, a genuine danger. It’s not the problem for Buddhist Zen of its many stripes and it’s not a problem for Christian Zen. But, it is a danger for the rationalist and naturalistic Zen.

And that is a reductionism that leads Zen to being an adjunct to modern psychology and its project of individual adjustment to a world where everything disappoints. Awakening disappears, downgraded to calm. Not a bad thing. But, compared to awakening, a pathetic substitute. Having the stories of brokenness and healing, especially the Buddhist analysis, even if writ large, or metaphoricalized, if understood as pointing to some profound truths about who and what we are corrects this. The Jewish and Christian stories of the fall also can work, with some work. But, those stories of brokenness and healing to which we are pointed seem a critical aspect for us to take Zen to where it can take us.

It’s most obviously a collection of practices. It’s also very much a school of spiritual direction with a tradition of directors.

But, most of all it is a school of broken hearts. Zen is a way of healing. But it is a healing that is counter-intuitive. It is a way not from but into.

Into the heart of the world.

July 4, 2019
The America of My Dreams: The Briefest of Meditations for the Fourth of July
Next Post

July 8, 2019 Never Again is Now: A Letter To Buddhist Leaders
Recent Comments
0 | Leave a Comment
"Neben der Entrümpelung Wien bieten wir Ihnen als Dienstleistung auch die Entfernung von Tapeten, Teppichen, ..."
Entrümpelung Wien Water and Light Soaking into the ..."
"Ive seen far too much of what Christianity has done and will continue to do, ..."
Brianna LaPoint Help Wanted: We’re Creating a progressive ..."
"this blog is supposed to be about Buddhism. See? this is why i dont like ..."
Brianna LaPoint Pilgrimages: A Mind Bubble on Spiritual ..."
"Ha ha, thank you, James!Yes, I think a good first book's main point may be ..."
Tim Macejak SINGLE BOOK ZEN: Zen Teachers Recommend ..."
Browse Our Archives
get the latest from
Monkey Mind
Sign up for our newsletter
POPULAR AT PATHEOS Buddhist
1