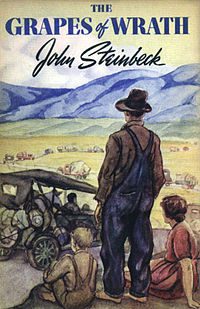 John Steinbeck, American novelist, winner of the Nobel Prize for literature died on this day,  the 20th of December in 1968. Since his death his fortunes have fallen and risen, perhaps demonstrating his complexity.

Steinbeck is of course the author Grapes of Wrath which published eighty years ago, this year, on the 14th of April, 1939. I commented on it on the occasion. And shared some of how important it was to me. Here I revisit that reflection, tweaking a bit here and there…

It was wildly successful. He won the Pulitzer Prize and the National Book award for it. And later when Steinbeck received the Nobel Prize in literature Grapes was mentioned as principal among his writings. The following year John Ford’s masterwork film based on his novel put the story and its themes out to an even larger audience. Woody Guthrie then turned it into a song.

I read it in my late adolescence. It would prove to be one of the formative reads in my young life. The book said some hard things about our country, about capitalism, about the rich and the poor. And by the time I had finished reading it, I realized whose side I was on.

My understanding has nuanced over the years. Today I consider myself a type of social democrat.

I think business is a seedbed of creativity and absolutely creates wealth. But business, capitalism if you will, has some stark shadows. First, and foremost, it is totally amoral. And, without some restraints it will wreck havoc within human societies. This takes two principal directions. The first is toward monopoly, the seed of its own destruction, and along the way causing the collapse of any just society. The second is the siren of short term profit, which leads to painting rotten meat, cooking up health claims for tobacco, and pumping filth into the air even to the point of changing the climate and opening an era of largely, at least in human terms, and for many, catastrophic changes.

For me the goal, the purpose of society is in fact moral. The purpose of society is the furtherance of our species, and with that acknowledging our stewardship of our planet. It is some ancient call to joy, to happiness articulated within those documents of an emerging universal civilization of, by, and for the people and our home, the precious planet. Particularly as articulated within the American declaration of independence, the statement of the four freedoms during the second world war, as well as the universal declaration of human rights composed shortly after that war.

Here we find those things that can create the base for such a just society, freedom of opinion and expression, equal access to education, decent health care, and a safety net that says those who fail or who are infirm or old can live with dignity. And the engine that supports all this is that well regulated, energetic and highly taxed business community.

My fantasy for a society worth living in.

And the first steps toward this view probably took formation when I read Steinbeck’s masterwork.

In this he showed in stark contrast the grinding poverty of people caught up in a form of capitalism that simply was about extracting profit. And, perhaps most importantly, he hinted at a spirituality that might show us a way through. I find it interesting, terribly interesting that the light Steinbeck offered was not an alternative economic system, but a spiritual perspective, an insight into who we truly are.

It is that vision, which in part, large part, I share, that the way through becomes obvious.

Each of us precious.

All of us connected.

December 19, 2019
A Zen Priest Reflects on His Past Lives
Next Post

December 21, 2019 The Zen priest finds himself thinking of Thomas the Doubter as a paragon of the Intimate Way, the Secret Heart of Religions
Recent Comments
0 | Leave a Comment
"An excellent essay, and a necessary one. I quibble about the UU T-shirt which says, ..."
Ohyetwetrust CHANGE & NOT KNOWING: Darwin, Huxley, ..."
"I appreciate your acknowledgement that since you didn't know the source of most of the ..."
Harold Wood Recalling John Muir, Nature Mystic, and ..."
"I purchased "This is It" back in 1974 simply because of the paperback cover. Now ..."
Ed Alan Watts Turns One Hundred & ..."
"One basic error of every "optimistic" philosophy is thinking that humans are evolving into more ..."
bill wald ALL BEINGS, ONE BODY: A TRUE ..."
Browse Our Archives
Follow Us!

Buddhist
John Steinbeck, the Grapes of Wrath, and a...
Monkey Mind 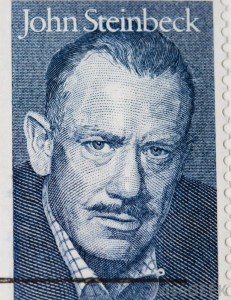