Hakuin Ekaku, one of the two most important figures in the history Japanese Zen, died on this day, the 18th of January, in 1769.

He was born on the 19th of January, in 1686, in a village at the foot of Mount Fuji. As a child he attended a lecture given by a Nichiren priest on hell. The talk captured the boy’s imagination. He became obsessed with the idea of the hell realms. And he determined to escape them by becoming a monk.

When Hakuin turned fifteen he entered the monastic life as a Zen priest at Shoinji. Soon after he was sent to study at a neighboring temple, Daishoji. Here he delved deeply into Mahayana texts, and in particular he studied the Lotus Sutra. Ultimately he dismissed it as recorded in Wikipedia, as “nothing more than simple tales about cause and effect.”

Hakuin continued training and ended up at Zensoji. Here he became obsessed with the story of Yanto Quanhuo, a Chinese master who when murdered by robbers yelled so loudly that he could be heard valleys away. He despaired of ever escaping hell and while not formally disrobing, deciding to devote himself to literature and poetry.

When he was staying with the poet monk Dao Rojin he saw a stack of books about all the schools of Buddhism. He prayed to be directed to the right path, and reached with eyes closed to pick a book. It was about Zen.

At the age of twenty-three Hakuin had his first taste of awakening, hearing the ringing of the temple bell. He dug into koans with Shoju Rojin, who pushed him through three major awakening encounters. While he did not receive authorization from the master, he forever considered Shoju Roshi his master, and ultimately he himself, the master’s heir.

Something happened, a medical or psychological crisis. He called it a “Zen sickness.” He ended up finding help with a Daoisst hermit. And, from that period he included attention to health, what I think we would consider both physical and mental, a part of his practice.

At the age of thirty-one Hakuin returned to Shoinji where he had originally been ordained, and accepted the invitation to become the head priest of the temple. He would serve for fifty years.

About ten years into his abbacy, Hakuin was reading the Lotus Sutra, which he’d long before dismissed. And in a chapter on parables, where the Buddha warns against attachment to one’s personal awakening, and described the Bodhisattva way, returning from the mountain, and serving until all cross to the farther shore together, he awakened into the truth of the words.

He declined invitations to the capital and other larger institutions, instead staying at his original temple.

Hakuin taught that there were three essentials to the practice, great doubt, great faith, and great energy. His attention to the koan way would lead a reform of how Japanese Zen approaches the discipline, becoming two styles named for grand successors of his Inzan and Takuju. (My own koan life is itself a slight modification of the Takuju system) He encourage both monastic and householder practice. For a bit longer reflection digging into some of the art and heart of his teaching, I recommend a brief reflection by Roshi Dosho Port.

He would eventually authorize eighty dharma successors. And today nearly all Rinzai lines trace through him.

Hakuin was also a prolific writer. One of his enduring works is his Song of Zazen.

All beings by nature are Buddha,
As ice by nature is water.
Apart from water there is no ice;
Apart from beings, no Buddha.
How sad that people ignore the near
And search for truth afar:
Like someone in the midst of water
Crying out in thirst,
Like a child of a wealthy home
Wandering among the poor.
Lost on dark paths of ignorance,
We wander through the Six Worlds,
From dark path to dark path–
When shall we be freed from birth and death?
Oh, the zazen of the Mahayana!
To this the highest praise!
Devotion, repentance, training,
The many paramitas–
All have their source in zazen.
Those who try zazen even once
Wipe away beginning-less crimes.

Where are all the dark paths then?
The Pure Land itself is near.
Those who hear this truth even once
And listen with a grateful heart,
Treasuring it, revering it,
Gain blessings without end.
Much more, those who turn about
And bear witness to self-nature,
Self-nature that is no-nature,
Go far beyond mere doctrine.
Here effect and cause are the same,
The Way is neither two nor three.
With form that is no-form,
Going and coming, we are never astray,
With thought that is no-thought,
Singing and dancing are the voice of the Law.
Boundless and free is the sky of Samádhi!
Bright the full moon of wisdom!
Truly, is anything missing now?
Nirvana is right here, before our eyes,
This very place is the Lotus Land,
This very body, the Buddha

For more on the master, go here.

January 15, 2020
THE PRICE OF POTATOES IN IDAHO A Small Meditation on a traditional Zen Koan
Next Post 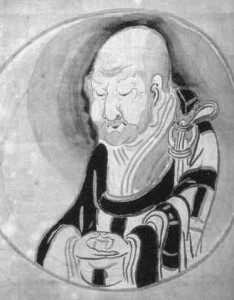 Buddhist
Hakuin Ekaku on the Importance of Kensho
Monkey Mind 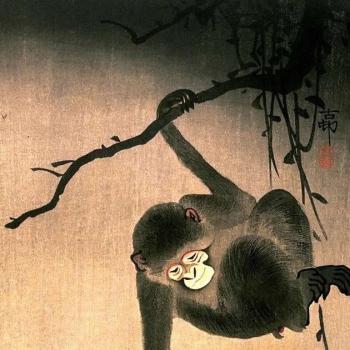 Buddhist
MANY LOVES A Small Reflection on the Spiritual...
Monkey Mind
TRENDING AT PATHEOS Buddhist