What Did Jesus Drink? 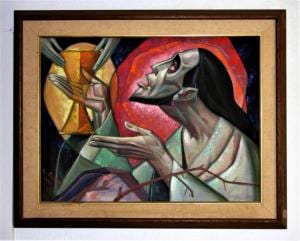 My grandmother, Bolene Bernard, was my first spiritual guide. She was an elder in her independent Baptist churches and a prayer warrior. Grandma was a wise and courageous woman. She was always poor. The only bad decision I know she made was in her choice of a husband. She worked mostly as a maid. As she aged people increasingly went to her for counsel.

Not only did I learn to read from a large illustrated King James Bible resting on her lap, I learned about the spirit world, about wounds that don’t heal, and that love filled the world, and in the end all will be well.

Bolene was also a Biblical literalist. One of those small cracks in the hermetic world within which I lived as a child occurred when I first noticed my grandmother believed every word of the Bible was literally true. And that when the text said Jesus drank wine, it meant grape juice.

Fast forward. A couple of months ago, I was researching video clips for the class I’m teaching on Abrahamic spiritual texts. And while wandering around the wild West of religion on Youtube, I stumbled upon ReligionForBreakfast a webpage run by Andrew Henry, currently a PhD candidate at Boston University. I’ve found him a wonderful objective resource, especially for the New Testament.

He also produced a video on the wine Jesus might well have drank.

It does appear to have been alcoholic. Sorry, Grandma…  Although likely not with quite the punch of our current wines. Although. Maybe.

Anyway. If you’ve ever found yourself wondering what was that water turned to wine, and more, what was that wine at the Last Supper, well, you’re in for a treat. No hard answers. Sorry. It just isn’t going that way. But a very reasonable peek into what is most likely…

The image is “Jesus and the Holy Chalice” by Conrad Pickel

April 22, 2020
The Good News as Magical Realism: The Zen Priest Reflects on Pasolini's Gospel According to St Matthew
Next Post

April 23, 2020 WHAT WILL YOU DO? The Zen Koan of the Old Woman and the Burning Hut
Recent Comments
0 | Leave a Comment
"happy birthday old scout! how true the pome! my 73rd is this coming september 29th: ..."
Brian McInerney The Zen priest recalls a poem ..."
"I'm not sure what you mean by the phrase," Divinity School, Cambridge," Perhaps it is ..."
B J M Mr Emerson Proclaims a New Infidelity
"Marion Mountain, author of The Zen Environment, was seminal in this book as well. http://www.cuke.com/Cucumbe..."
BrightHeart Lewis Headrick Sometimes It Takes a Community to ..."
"Ironic coming from someone who really wasn't technically properly ordained in Soto Shu and was ..."
La Resistencia Soto Zen Buddhism in North America: ..."
Browse Our Archives
get the latest from
Monkey Mind
Sign up for our newsletter
POPULAR AT PATHEOS Buddhist
1