Fanatics and the Spiritual Life 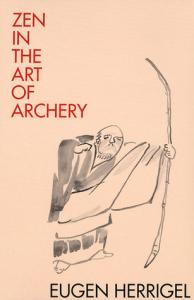 In 1953, his book Zen in der Kunst des Bogenschießens was published as Zen in the Art of Archery. It was one of the first English language books in general distribution that touched on Zen. And it was wildly successful. “Zen and the art of” would become the title of numerous serious and facetious studies of one thing or another including motorcycle maintenance, poker, knitting, and writing.

Another of his books, compiled by his widow from notes, and published in German, as Der Zen-Weg and then later translated, then edited and polished by Alan Watts was published in 1960 as the Method of Zen. It also had a time.

As people in the West came to understand Zen better, his approach was criticized as highly romantic, and not adequately representative of the tradition. D T Suzuki for a moment thought well of his intention, but eventually said Herrigel really missed the point. And he is less read today.

Herrigel himself was a professional philosopher and a student of mysticism. He was also a Nazi. Another reason he is less read.

I mention him for three reasons, at least. One is recalling the time when it was possible to read every book on Zen in the English language, and that it wouldn’t take a great deal of that time. Another is how there are a lot of people offering Zen wisdom who probably don’t have it. And, a third is how things tend to come out in the wash…

Actually there is a fourth reason. And, maybe the more important. I’m deeply concerned with the question of how mysticism of all sorts is so often coopted by totalitarians. It’s an issue. Herrigel is just an example.

In China Chan and all other monastics were careful not to offend the state, where the consequences could be swift and ugly. Part of how they survived in Chinese culture was the creation and transference of merit on behalf of the court and country. Similar things happened in Japan. And in Japan Zen and Japanese culture began to be identified, a mixed blessing for sure. Then, when military totalitarianism arose, the Zen churches were all in. Watching the Russian Orthodox Church similarly go all in for a campaign of aggression is just a most recent example.

I wonder about that, and why and how that might be. And, beyond the way institutions can be coopted, there’s the very personal aspect. There seems to be a close connection to some of the things that draw someone toward a spiritual tradition and to various forms of totalitarianism. Thomas Merton once wrote about the temptations that can call one to the spiritual life and to popular totalitarian movements without a lot of clear distinctions.

In his essay “Christianity and Totalitarianism,” Fr Merton writes:

“A mass movement readily exploits the discontent and frustration of large segments of the population which for some reason or other cannot face the responsibility of being persons and standing on their own feet. But give these persons a movement to join, a cause to defend, and they will go to any extreme, stop at no crime, intoxicated as they are by the slogans that give them a pseudo-religious sense of transcending their own limitations.

“The member of a mass movement, afraid of his own isolation, and his own weakness as an individual, cannot face the task of discovering within himself the spiritual power and integrity which can be called forth only by love. Instead of this, he seeks a movement that will protect his weakness with a wall of anonymity and justify his acts by the sanction of collective glory and power. All the better if this is done out of hatred, for hatred is always easier and less subtle than love. It does not have to respect reality as love does. It does not have to take account of individual cases. Its solutions are simple and easy. It makes its decisions by a simple glance at a face, a colored skin, a uniform. It identifies an enemy by an accent, an unfamiliar turn of speech, an appeal to concepts that are difficult to understand. He is something unfamiliar. This is not “ours.” This must be brought into line – or destroyed.

“Here is the great temptation of the modern age, this universal infection of fanaticism, this plague of intolerance, prejudice and hate which flows from the crippled nature of man who is afraid of love and does not dare to be a person. It is against this temptation most of all that the Christian must labor with inexhaustible patience and love, in silence, perhaps in repeated failure, seeking tirelessly to restore, wherever he can, and first of all in himself, the capacity of love and which makes man the living image of God.”

Of course Fr Merton was concerned with Christianity. And Christians. But his analysis works for Buddhism, as well. And Buddhists.

Buddhism isn’t quite so easily moved into hatred. Or, one would hope. (And, yes, I can see how Christians should have a similar sense, with a nasty but-look-at-how-it-manifests in so many places…) As soon as one’s religion is identified with one’s culture, all bets appear to be off. For an example as how Buddhists can do this witness the fate of the Rohingya in Myanmar.

In our contemporary West as far as the political part goes, the danger seems a bit less from the right. For all sorts of reasons, not least the fact that Zen is a minority religious view and attracts mostly from the well educated with an interest in otherness. Much of the convert community has a bias toward the left of the spectrum in our contemporary North American and European cultures. So, the temptations mostly go to the left. The warning sign is whether you can easily find an enemies list. And if that list is justified by your religion.

The danger for us mostly regards how we meet the world. Do we become narrow and fanatic or do we become something else?

The temptations of a faith where you just surrender everything is a dangerous thing. And mystical traditions call for that, phrased one way or another.

Because to find the heart of the matter we do need to surrender everything.

A conundrum. A dangerous game this.

And Father Merton offers counsel in the face of it. I repeat it here with a couple of small edits.

“Here is the great temptation of the modern age, this universal infection of fanaticism, this plague of intolerance, prejudice and hate which flows from the crippled nature of people who are afraid of love and do not dare to be a person. It is against this temptation most of all that the Buddhist must labor with inexhaustible patience and love, in silence, perhaps in repeated failure, seeking tirelessly to restore, wherever they can, and first of all in oneself, the capacity of love and which makes us the living image of Buddha.”

Funny how easy that is. Well, at least easy to write…

March 21, 2022 Thinking of Thomas Cranmer and the Lovely Mess he Bequeathed
Recent Comments
0 | Leave a Comment
"everything Jesus has to say about being a true believer of the true way is ..."
Isa Kocher HONEST TO JESUS: The Zen minister ..."
"My translation at http://home.pon.net/wildros...and here https://terebess.hu/english...Terebess has 26 translations at https://terebess.hu/zen/tex..."
Gregory Wonderwheel Faith in Mind, the Xinxinming, a ..."
"Happy birthday in advance, thanks for this thoughtful article and the ones to follow it."
Oliver Oehm Sun Faced Buddha, Moon Faced Buddha: ..."
"Thanks, James. While not specifically Zen, a sangha member alerted me to the book A ..."
Julie A. Nelson Holders of Lineage: A Small Meditation ..."
Browse Our Archives
Related posts from Monkey Mind