Some Zen Advice for Dying 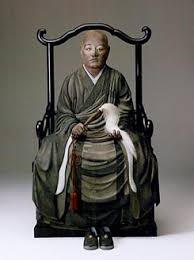 Out in the social media realms, the American Rinzai priest Meido Moore shared the great Thirteenth century Eihei Dogen’s advice for dying. It had been awhile since I’d read it. And, the re-read touched me. So, I thought it appropriate to share the quote here together with a few words of reflection.

First the text. From the Shobogenzo section 94, “Mind of the Way”, in the Levitt & Tanahashi translation.

“When you leave this life, and before you enter the next life, there is a place called an intermediary realm.* You stay there for seven days. You should resolve to keep chanting the names of the three treasures without ceasing while you are there. After seven days you die in the intermediary realm and remain there for no more than seven days. At this time you can see and hear without hindrance, like having a celestial eye. Resolve to encourage yourself to keep chanting the names of the three treasures without ceasing: ‘I take refuge in the Buddha. I take refuge in the Dharma. I take refuge in the Sangha.’ After passing through the intermediary realm, when you approach your parents to be conceived, resolve to maintain authentic wisdom. Keep chanting refuge in the three treasures in your mother’s womb. Do not neglect chanting while you are given birth. Resolve deeply to dedicate yourself to chant and take refuge in the three treasures through the six sense roots. When your life ends, your eye sight will suddenly become dark. Know that this is the end of your life and be determined to chant, ‘I take refuge in the buddha.’ Then, all buddhas in the ten directions will show compassion to you. Even if due to conditions you are bound to an unwholesome realm, you will be able to be born in the deva realm or in the presence of the Buddha. Bow and listen to the Buddha.”
(*In Japanese, Chuu or Chu-in. Skt.: Antarabhava, Tib.: Bardo)
So, what to make of this advice? And why might it be useful to someone today?
You could take this literally and with that perhaps focus on the bardos. Which calls one to either embrace or reject. Your call, certainly. I don’t feel hesitant in asserting that no one who has died, dead died, brain dead died, has ever returned to tell us what happens to the consciousness that calls itself “me.” There’s that. But, poets dream and sing. And, there’s that. In fact, another fact, it’s all poetry, it’s all dream. To be human is to dream. And there’s very much, at least as I find it, real in this less tangible part of our existence.
More significantly for me, and maybe for you. What is this refuge that we’re calling upon, that we’re throwing ourselves into, that calls us, and embraces us? Embraces you. Me. Here in this encounter, in our surrender, our turning, our allowing, I believe we find we’re being invited into something very much alive.
Again with a literal, literally it’s taking refuge within Buddha, the teacher, Dharma, the teachings, and Sangha, the community. Each of these things can be sliced and diced in any number of ways. And, are. Each an angle, or, to play a little, an angel. A harbinger.
Dogen’s refuge was also a summation. All he specifically mentions is Buddha. A rich word this awakening thing. Filled with nuance, light corners, and dark. It also includes those other things, teaching, and community. And with their own light corners, and dark. Again, something very much alive.
One way to take this is a full embrace of something that people have noticed over and over again throughout the many cultures and their religions. As we turn our attention, genuinely turn our attention to the matter at hand, well… You know in some ways, this alive thing is always about the dying thing. Along with so much else. Pregnant becomes a word I find helpful. Certainly as we turn, open, surrender, those words are themselves slippery, as we open, something appears. Angles. Angels…
For a handful of people what appears is something terrible. I think it a mistake to miss that possibility. We are in some very genuine ways the product of our lives, built, woven, pick you image, moment after moment, year after year. Marly’s ghost and that chain should not be forgotten. We all have chains of our own making that bind and follow us.
But, here’s a wonderful thing. If we turn toward the mystery. If we genuinely embrace the real, who we are, as real as that might be, it turns out we’re, to adjust a slippery play of images, just a thread in the great weaving. But notice that. There is a release that comes with that.
I find myself thinking of Mona Simpson’s eulogy for her brother Steve Jobs. She reports that he died as most of us do, as we are. He said kind things, he said harsh things. By many accounts he wasn’t the most generous of people. But, then as he turned to the final task, Ms Simpson reports his final words were “Oh wow. Oh wow. Oh wow.” She emphasized this by writing the words in all capital letters. In writing, as most of us understand, that becomes a shout.
One can interpret such a thing in near endless ways. But, the one that pushes itself forward for me is a turning into wonder. A taking refuge in the real. Whatever happened with Mr Jobs, there is an invitation in this for us. You. Me.
Take refuge.
Oh wow.
Calling out to Buddha.
To Amida.
To Jesus.
To Abraham.
To Mary.
Quanyin.
Mother.
Mother.
Refuge. Just this.
Oh wow.
Previous Post