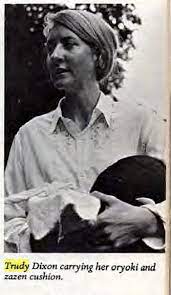 I noticed that it was today, the 9th of July, in 1969, that Gertrude Dixon, Trudy to her friends, died.

With that I thought of her part in the sinking of Zen roots in North America.

Who is to say when it began. Although one good starting point is 1965, when Marian Derby started recording Shunryu Suzuki’s lectures in Los Altos. She then took the tapes and started transcribing them. Consulting with the roshi (who often commented, “Did I say that?”) she compiled a manuscript.

Richard Baker, at the time Suzuki Roshi’s right hand, assumed responsibility for the manuscript, and in 1968 gave it to Trudy Dixon. Trudy had previously edited some of Suzuki Roshi’s talks for the center’s newsletter, Wind Bell. She was a also a close student of the Rosh.

Commenting on this in his biography of Suzuki Roshi, Crooked Cucumber, David Chadwick noted “Trudy took on the task even though she had two small children, had undergone surgery for breast cancer, and was in poor health.”

She re-listened to the tapes, took the mess of materials, and began to organize it. During this process she consulted regularly both with Richard and the roshi. Even as she was moving toward death, she didn’t let up. Finally, Trudy completed her work and handed it on to Richard, who took the manuscript with him to Japan for minor editing.

When the book, now titled Zen Mind, Beginner’s Mind, came out the following year, as David Chadwick said, the roshi “looked at the book, which reflected his teaching through the work of Marian Derby, Richard Baker, and Trudy Dixon. After a moment he moved up next to me (Chadwick) and chuckled. ‘Good book,’ he said, thumping the cover with an index finger. ‘I didn’t write it, but it looks like a good book.’”