With My Body, I Thee Worship, Part Five

Go here for Parts One, Two, Three, and Four.

It’s been a mere month since the last time I wrote on this! Sorry there. Anyway.

An Exhaustive History of All Trans People and Issues

Obviously I’m not really offering that! No one could, and I’m less educated about trans issues than a lot of people I know. But I do want to make the point that, like intersex people, trans people actually have a long history—whatever self-appointed Christian culture warriors may say, being trans is not a new fad devised to destroy religion.

Now, the specific word transgender is fairly new (only a few decades old). Likewise, a lot of the ways people have talked about what gender is since, say, the 1950s are comparatively recent, and depend on certain concepts drawn from modern philosophy, especially modern feminism. But these words and ideas were brought in to discuss something that already existed, and was thought and talked about under different terms by other cultures.

Two of the most famous examples here are the hijra of South Asia and the “two-spirit” traditions of many Native American peoples. Hijra is a broad category, including intersex and transgender people, as well as eunuchs. They are a very ancient institution in South Asian culture, alluded to in the Kama Sutra, which dates at the latest to the third century. “Two-spirit” is another umbrella term for a lot of different gender-variant identities, all of which are understood in specific ways by the particular nations that use them (so, for instance, the Blackfoot a’yai-kik-ahsi isn’t just “the same thing” as the Ojibwe ikwekaazo, but both fall under the “two-spirit” umbrella, at least in theory). Not all nations treated two-spirit identities the same way, but a large number did at any rate recognize them and have a social role for them.

Again, and like intersexuality—which, for all the recent outcry against trans-affirming health care for teenagers, we’re quite happy to surgically eliminate in literal babies—being what we now call trans is not new. It’s a thing that has certainly existed, under various names, all over the world and for many hundreds of years. That doesn’t validate it, or invalidate it, but it does mean it’s wrong to dismiss it as a fad or a conspiracy.

Okay, but what about the Church? She rebuked and corrected a lot of socially accepted conventions when she came into existence. Couldn’t that be why trans people were so invisible in western society until recently?

Well, it could, but I’ve had trouble finding evidence that it in fact was. Degrees of intersexuality were certainly recognized in the Medieval period, by both Jews and Christians, and this knowledge is reflected in both the Talmud and Catholic canon law; but of course intersexuality is more “objective” than trans identities.

Where things get really interesting is in stories of people like St. Marina the Monk, whose story is related in the Golden Legend. The story goes that she disguised herself as a man to be able to accompany her father when he retired to a monastery; after he died, she went on living as a monk, until a young woman in a neighboring village falsely claimed that Marina had impregnated her. The abbot, furious at his monk’s supposed transgression, made Marina care for the child and live in perpetual penance for breaking “his” vows. This lasted until Marina’s death, and when they came to wash the body, they discovered that she was female. Horror-stricken at their mistreatment, they venerated her as a saint for her unflinching patience, humility, and generosity.

Except—wasn’t she lying to them all that time? Does this imply that presenting yourself as one gender when your physical sex is something else is okay? Well, yes. Strictly speaking, we already knew that, because St. Joan of Arc did it (in fact, it’s part of the reason she was wrongly condemned as a witch). But things get more interesting from here … 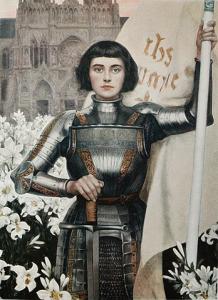 In the early ’70s, an annulment case was brought before the Roman Rota due to the husband of the couple being (as was then the standard term) “transsexual.” The suit for nullity was ultimately refused, but the canonists handling the case made quite a startling assertion in their copious explanation of the case:

Because, when there is a question of transsexuals, a radical dissociation is found between psychological sex on the one hand and … somatic sex on the other hand, so that transsexuals feel like the soul of a woman in the body of a man or vice versa … nothing prevents predominance from being attributed to the psychological sex as regards those matters which do not exceed the juridical capacity of the subject. For the canonical teaching which, in cases of doubtful sexuality, recognized for the subject to make a definitive choice of sex, can be applied “when there is a question of ordering one’s purely external and social life, e.g., of wearing men’s or women’s clothing, of giving testimony in instruments, of the right to determine an heir.”

That’s a pretty remarkable statement! It seems to amount to saying that, while things like marriage (which, according to Catholic doctrine, depend on certain things that “exceed the juridical capacity” of any private person) may be biologically restricted, the way a person presents themselves to the world is and should be at their own discretion. This would presumably cover not only things like clothing, which the decision explicitly mentions, but name, and even—and yes, I know these aren’t in the Bible—pronouns.

Then again, this is canon law. What do the official teaching documents of the Church say about all this?

March 21, 2022 With My Body, I Thee Worship: Part Six
Recent Comments
0 | Leave a Comment
"Blue for Advent is not a color in the Roman Rite. The evidence for Sarum ..."
Liam781 Time for a Little Pontification
"Much more in favor of a grass/forest/India green than olive for """ordinary time""". (Not using ..."
Erica Time for a Little Pontification
"Do you not believe that we will ultimately stand before God as individuals? Am I ..."
The Latin Right A New Page in History
"Fascism is a specific form of nationalist, authoritarian politics, one that tends to elevate an ..."
Gabriel I. M. Blanchard A New Page in History
Browse Our Archives
Related posts from Mudblood Catholic