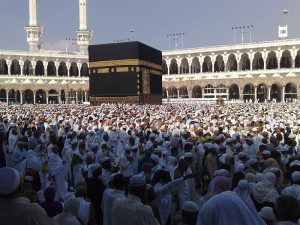 Six short years. Six long years. Six extraordinary years. Often I feel like my life is lived in two ways – pre-Hajj and post-Hajj. The other way is pre-autism and post-autism. Both have been life changing experiences for me and my family in ways too lengthy, intimate and emotional to lay out in one measley blog post.

Every Muslim who has gone for his or her Hajj has a unique story to tell, from how they received the calling (for literally, many feel like when the time comes, it’s like they’ve received an invitation from God to make their niyyat, or intention, to perform the Hajj), to what it took to get them there, to the Hajj itself, and then returning to life back home.

For my husband and I, the invitation, or pull we felt from God to perform the Hajj was a real visceral, difficult, wrestling pull. The year before we went was when our eldest son had received his autism diagnosis at the age of three, sending us all on downward spiral from which we were fighting tooth and nail to gain release. I can’t speak for my husband, but I was in the throes of a very difficult spiritual struggle, a real struggle with God’s plan for us, for me, for my son.

The next year, more than a year into our post-autism life, we had Lil D enrolled in a great autism school in Manhattan and attending a very rigorous, tough, but beneficial verbal behavior therapy program in upstate New York after school. It was a very exacting schedule for me to maintain, and I had a toddler daughter to boot. My in-laws were with us for several months, which was a God-send of support, both physical and mental. And so, when that pull came for Hajj, though it meant having to leave my children (especially my son, for whom I only trusted myself to keep him on his therapy schedule and manage all his needs and issues – from sleep problems, to illnesses, to tantrums, to ABA protocol), I was ready to do it.

In January of 2005, we left our children with my in-laws in the dead of a New York winter and went for three weeks to perform our Hajj. And what has come out of that has been a continual lesson in acceptance, strength, despair, frustration, anger, and gratitude.

I am thinking of these things today. I am thinking of our lives six years ago, and where I am now, where we are now as a family. I am remembering what I felt and learned that day on the plains of Arafat. And I pray God forgives me for the mistakes I’ve made since then, for all that I’ve forgotten. I pray that God answers all the prayers I made during those days, that He accepted my Hajj, that He accepts the Hajj of those who are performing their pilgrimage right now.

Click here to see the Hajj being performed live.