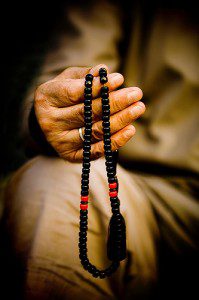 In my post last week about the Dr. Jekyll and Mr. Hyde of autism, I wrote how Mr Hyde has been my son’s persona for several weeks, if not months now, and of how I continue to struggle in my faith, in my ability to put full trust in Allah that somehow He will help my son and me. Although I know I should pursue a course of faith and worldly, practical actions (therapies, medical treatments, education, schooling), the scales have been tipped of late towards the latter.

I know this, really, I KNOW this. Still I struggle with my severely imperfect faith. But, after writing that post, two things happened: A facebook friend reached out and told me to call her. She is Muslim as well and has an autistic child a few years younger than mine. You don’t find a lot of Muslims with special needs children opening up to each other, which is something (among other things) I’m trying to change with this blog.

But, she reached out to me, gave me her number, and we had a phone conversation — bonding over all our struggles. She told me some prayers to say for my son, and while my parents and inlaws have so many times told me different prayers to say, this friend’s words somehow struck deeper — because she was there in the trenches with me, with her own son, struggling as a Muslim mom to an autistic child.

Then, I read a comment posted to that Jekyll/Hyde blog post from a reader who is high-functioning autistic and Catholic. And boy, did this person have some eye-opening advice:

What to do with Mr Hyde:

Teach him to pray.

No, really.  I know I’m a Catholic and a bit unfamiliar with your religion, but I’m a high functioning autistic who has had to deal with meltdowns all of his life.

Set up a quiet room in your house, even if all you can afford is a closet.  Give him a prayer rug or a kneeler or whatever fits your family traditions.  Maybe two so he won’t be scared the first few times if you can be with him.  Then, when you here the perservating, when you can tell a meltdown is about to happen- that’s the time to pray.  The routine of the prayers is calming.

In keeping with my traditions- I keep a rosary in my pocket.  When stress builds and I know I’m about to have a meltdown- I seek a solitary place, even if it’s a stairwell or a bathroom stall- and I pray.  A decade or two later, and Mr Hyde is gone.

I may not be able to meet you on theology- but when it comes to tradition, routine, and self-control, Islam is equal to or better than Christianity on all three.  And it’s those three things, that the Autistic needs to survive in the modern world.

Teach him to pray. What a concept. Again, several people have suggested this to me before, but never in this way. I have often looked at my son, who is severely autistic, and thought, what is he going to get from me teaching him the rituals of salat, nevermind how long it will take to teach him (it took more than a year to get him to fasten buttons). What would it mean to him? There are so many, so many things he needs to learn in order to survive as an adult in this world. What will he gain by me trying to make him learn how to physically pray as a Muslim?

But the commentor has a great point: “I may not be able to meet you on theology- but when it comes to tradition, routine, and self-control, Islam is equal to or better than Christianity on all three.  And it’s those three things, that the Autistic needs to survive in the modern world.” 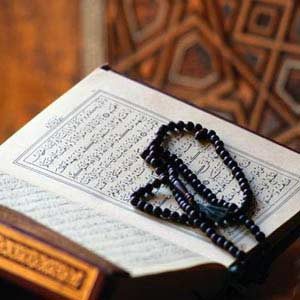 Tradition, routine, self-control — what are the five daily prayers if not part of the routine of a Muslim? Or fingering a tasbih (a string of beads similar to a rosary used to count short prayers) and reciting dhikr (not fard or required, but certainly a good thing to do) — which is also routine and an exercise in self-control. My son thrives on routine. And, when he is in the throws of a meltdown, his therapists and I often instruct him through short commands to help ground him and occupy his mind and hands (clap your hands, stomp your feet, touch your nose, do the puzzle, do this, do this, do this) until hopefully he comes out of it.

Why not add the tasbih or rituals of salat to his arsenal of meltdown-breaking weapons? My mom-in-law for years has been taking my son’s hands and counting to five on his fingers, especially as an attempt to calm him down. Why not put a tasbih in Lil D’s hands and hand-over-hand make him finger the beads while I say “Alhumdullilah” or “Subhanallah“?

This is a boy who I made repeat the shahada (declaration of faith as a Muslim – la illaha illallah, Muhammad-dur Rasullallah) from the time he was a baby until now, as I did with all my kids (his speech is way more unintelligable now, but he still knows it). This was a boy who at the age of four, after months of work with my mom-in-law, repeated the lines “Iqra bismika … ” until one day he managed to repeat the whole Qur’anic verse, upon which we called up our family and excitedly announced that he performed his Bismillah (a culturally-based religious ceremony where a child, around the age of four, recites verses from the Qur’an as a symbolic gesture that he/she will now begin learning to read the Qur’an).

When did we stop teaching him the rituals of religion? I still make him repeat the shahada, although his verbal speech has greatly deteriorated, and I try to make him repeat “Bismillah” before eating or when we start driving somewhere. Sometimes I draw him into my lap to make du’a with me after I finish salat.

But that’s about it. And I’ve never used the rituals of our religion when he is on the road to a meltdown or in the midst of it. And yet, why not? Why the heck not?

Tradition, routine, self-control — those … “three things that the Autistic needs to survive in the modern world.” Brilliant. Simply brilliant. I feel inspired to try. Subhanallah.

March 28, 2012 I Get By with a Little Help from My Friends
Recent Comments
0 | Leave a Comment
Browse Our Archives
get the latest from
Muslim
Sign up for our newsletter
POPULAR AT PATHEOS Muslim
1