Hey Autism, Verily with Difficulty There is Ease 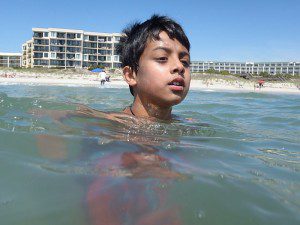 Spring break on the beach: Are we a couple of free-wheeling college students on Daytona Beach? Nah. We’re a family of five (seven with my in-laws included) who decided to come to a beach in South Carolina because it seemed the only place that everyone, especially our eldest son, would have some fun.

The question asked of me by so many leading up to this trip was: What do you think will happen? Meaning, our family’s life — in a way — has been held hostage the past several months by the extreme behavioralchanges in Lil D. So, what will happen if we take our family out of our home and the home/school routine, which has been both a safe haven and a kind of prison for Lil D of late? How will we handle him in an unfamiliar environment?

It’s the beach, I told everyone. It’s the ocean. It’s the one thing that has made him happy in the past. So, it can’t be any worse than what’s been going on at home and school. It can only be the same, or better.

Would it be like the reunion of two old souls in some epic Hollywood love story? Their eyes meet. Would the love rekindle? Would the spark still be there?

Two and a half days ago, after arriving at our rental house the night before, we woke up in the morning, hurried through our breakfast, and walked to the beach. No swimsuits, no beach gear — just wanted to scope the place out.

As we stepped down from the boardwalk and onto the sand, the sounds of the ocean filled our ears, the gentle waves crashed on the beach, and the sun shone warmly, brightly, and with the promise of good times.

Lil D stood at the edge of the water, shoulders hunched, fingers gripping his shorts to pull them away from the wetness.

Then a grin broke out on his face. He stepped into the surf, gingerly at first, then with greater confidence. The bromance was back. Hello, old friend. It’s so nice to see you again.

For Once, Obvious Ease

When autism makes life for Lil D and the rest of us very tough, when we are thrown off our game (which is quite frequently), when we are unable to find answers despite extensive detective work as to why, WHY this has changed or that is happening or why self-injurious behavior has become such a daily part of Lil D’s life, I think of an ayat (verse) from the Qur’an: “Verily with difficulty there is ease. Verily with difficulty there is ease.”

It’s a line that is repeated twice, to tell us that in the most difficult of times, ease will come. Ease is there. I think of this, and sometimes it gives me comfort, and sometimes it brings profound frustration.

God forgive me. I know I should believe, but I am fallible, I am weak. Islamic scholars say that the ease that is promised is not necessarily obvious. God works in mysterious ways, as the saying goes, and when hardship is upon us, ease comes in ways we may not see at first or ways we may never grasp. But, the scholars say, ease always comes. It’s a comforting, but hard concept for me to trust.

But, in the last two and a half days, ease for Lil D and our family was obvious, blatant, overt, and any other adjectives I can think of. The Qur’anic ayat was fulfilled in a way so clear and noticeable that I was humbled. At the end of our first full day here, when the children were asleep and we were going to bed, I turned to my husband and said, “Do you know this is the first full day when he hasn’t …”

“Don’t say it!” my husband said. Don’t jinx it. But I’ll say it here – the first full day that Lil D did not hit himself, bite himself, pull his hair, or even seem on edge. He was happy.

Of Course, Autism Has No Magical Cure

The second day was the same, and yesterday morning was perhaps the best time in the waves. We left our youngest at the rental home with the grandparents and took Lil D and his sister to the beach.

It was just magical. Lil D climbed on his dad’s back and hugged him tight as they swam through the waves. He laughed, he made amazing eye contact, he was right there with us, without autism clouding our connection.

When we walked back to our rental home, Lil D, who always walks 10 feet behind us, ran up to his father and spontaneously hugged him, saying “thanks for bringing me here” with his eyes. It was one of those moments drenched in sunbeams and star bursts.

But – yes, there is a “but” – the magic has since ended. Lil D is having the same issues and problems in the past 24 hours. In a crazy, grim way, we feel a little better. This beach experience is not a magical cure. Moving to a beach town will not keep autism at bay. Of course we knew that, but at least now we have confirmation.

On day one, I thought to myself, autism, you lose. My son is happy. On day four I say, ok autism, you can’t take the first two days away from us. We had blessed ease, and we are thankful for every second of it.

April 6, 2012
When Prayer and Rituals Change Us, Not Our Circumstances
Next Post