The Hardest Hajj Lesson of All

The Hardest Hajj Lesson of All October 25, 2012 Dilshad Ali 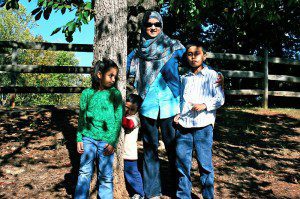 I sit at the dinner table and watched my kids eat. Lil D, grasping a big body pillow in his left arm (that’s his thing these days – he walks around holding a pillow, sometimes two, so he can plank at will), plowing through his kichiri-keema . Amal, all smiles because Lil D is eating dinner at the same time as her. And Hamza, trying to finagle his father’s phone to play Angry Birds as he finishes his meal. These kids of mine. If I could just pause this moment and live in it forever …

The miles you will span and the lengths you will go to, the decisions you will make, the leaps you will take, the research you will do, the strength you will find, the faith you will struggle for – a mother’s depth of love and care for her children is immeasurable. Growing up, I always assumed I’d some day wear the mantle of wife and mother, but I didn’t think too much about it.

And then I was married. And a little over a year later, I was a mother. Two years after that I knew something was amiss with my son, and we put him in early intervention. One more year later, three weeks after giving birth to our second child and juggling a freelance journalism career, our worst fears were confirmed: Your son has autism.

And we started to go the distance.

And we fought for Lil D. And we raised our daughter. And I wept.

And I started to fall.

And I was becoming lost.

And I had a brilliant, brilliant idea. My husband and I would go and perform our Hajj pilgrimage. We would travel to Makkah and Madinah and perform the rituals of the Hajj and fulfill our obligation to Allah, and we would pray for Lil D, for Amal, for ourselves. For Lil D. And something good and miraculous would come of it.

In 2005, two and a half years into our autism marathon, I felt that pull, that draw that so many Muslims throughout history have felt to make the journey to Makkah and perform the Hajj pilgrimage – the once-in-a-lifetime obligation asked of all healthy and financially-able Muslims. I became quite desperate to go, though it would require my husband to get three weeks off in the middle of his medical fellowship and we would have to leave our two children – ages 18 months and four-and-a-half at the time – with their grandparents in New York City in the middle of winter.

Lil D was by that point attending a private autism school and receiving verbal behavior therapy at an autism clinic in upstate New York three days a week – a clinic for which we had waited eight months to get into the year before. I was the one who drove from Midtown to downtown Manhattan, park illegally, go into his school and grab him, and then drive the ice roads out of the city to his clinic. Who would do that in my absence? I couldn’t pull him out for three weeks. And, Amal was in diapers. She was my baby. How would I walk away from her?

When your time comes for Hajj, when Allah sends you His invitation, the pieces of your life come together, as did mine. When I look back on it all now, the bigger thing I wrestled with was intention. Hajj is performed for Allah, and the reward is Insha’Allah coming back free of sins, renewed, prayers made, and prayers answered as God sees fit.

Intention. That was a game changer to me. I’ll admit something now, seven years later. That drive for Hajj began with a wild hope I had that by performing the pilgrimage and praying in the holiest of places, Allah would certainly grant me my heart’s desire – for Lil D’s autism to disappear and for him to verbally communicate.

I kept this intention a secret to myself. But my father-in-law — a man wise and smart and strong in his Iman (faith), a man who never spoke much about feelings  – he knew. He knew. He took me aside, after the tickets were bought and we were making our preparations, and had a conversation with me that I’ll never forget.

I know you love Lil D, he said to me. And, I know you would do anything to help him. But perform the Hajj for Allah. Don’t go for Hajj now if you think it’s the way you can cure Lil D. While you’re there, pray for him. Pray for him with all your might, as you pray for him every day. But your niyyah (intention) must be for Allah. And Allah will zaroor (definitely) answer your prayers.

I cried the hot tears of confusion and turmoil that night, considering if I should tell my husband that we should cancel our trip. Why was God calling me now for Hajj? What was my intention? What if my intention to do this for the sake of Allah wasn’t sincere enough? 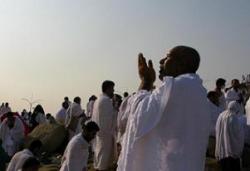 Weeks later, I saw the Ka’ba (house of God in Makkah in the Grand Mosque) for the first time in my life and made my prayers for Lil D. Then, we went to the plains of Arafah outside of Makkah, standing in prayers on the holiest day of the Hajj. My heart was at ease. It was all so simple. On that blessed day, I felt the most raw, vulnerable, and naked kind of love, trust, and faith that one can place in God.

I prayed for many things for my family, for myself, and for many other people during that Hajj pilgrimage. As the years passed, many of those prayers came true in ways that I could comprehend. But here we are, seven years later, and Lil D is still severely autistic, still nonverbal, still struggles to communicate, still faces so many difficulties and challenges that my heart weeps daily for him.

One of the hardest lessons I’ve had to learn, and I haven’t mastered it yet, is maintaining trust in God’s will and God’s plan. Sometimes our prayers are answered just how we want them to be, and more often they are answered in a different way (or not at all, if that is what is deemed better for us) – and we may come to understand that, or we many never understand it in our lifetime.

The Hajj season is upon us again, and I am remembering our pilgrimage seven years ago. I am remembering what I prayed for back then, and where we are now. And, I am looking at the kids sitting around the dinner table, eating at the same time, living in the same moment. This is a good moment. I am thankful. 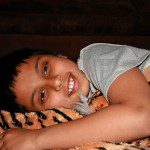 October 18, 2012
Reflecting on the Holy Days, the Year of Autism, and One Resolution
Next Post