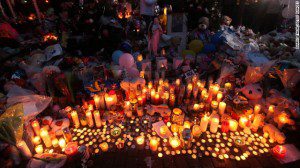 The early morning scramble to get the kids up, dressed, fed, and out the door to their three different schools is more hectic this week as we count down to winter break. Whereas I was much more organized during the start of the school year and more dutiful in getting things done before I woke the kids, now I’m barely getting up ahead of them and am rushing to get lunches made, meds administered, coats and shoes on and bags packed as they chow down their breakfast in anticipation of busses coming.

I’m even slower now because I’m lingering over them as they get ready. The kids are wondering why Mamma is nicer (because my modus operandi is to be frantic and somewhat irritated at their morning sluggishness), why she is hugging us more?

I got the older two ready yesterday and sent them off. Amal even missed the bus because of my slowness, which is a rarity for her (because she’s at that age when she does NOT want Mamma to drop her off and would rather ride the bus with her friends). So, she got a ride from her dad. Five-year-old Hamza went in late because he is fighting a cold and had poor sleep at night. And, I wanted to take it slow with him. Cuddle him some more. Sit with him leisurely while he ate his breakfast (pancake shaped like Mickey Mouse, please). I even debated back and forth to keep him home so we could hang. But he, too, wanted to go.

We got to school an hour late, and as per the email we had received over the weekend, all the doors were now locked. There was a police car parked out front, and an officer patrolling the premise, which excited Hamza. His class was in the auditorium practicing for the big Winter Show, which is happening this week. So I walked him over there, and he joined his classmates, as they clapped their hands and waved their arms, practicing their one big musical number.

I stood in a darkened corner of the auditorium and watched them, and cried. Those babies, practicing their song for the Winter Show. “Boys and girls,” their teacher said, “When you walk out on stage, you may hear laughter from the parents. But they are not laughing at you. They are laughing because they think you are so special and cute and wonderful. So smile big and do your thing! You’re going to be wonderful!”

And they smiled big – so happy, so full of life.

When I hear about tragedies or face difficult times, I often think of our children or another. The story of Malala Yousafzai made me think so much about my nine-year-old Amal, and her love of education and books, her desire to be the first female president and the project she took in in 2012 to earn money through chores around the house so she could do an orphan sponsorship through Islamic Relief USA.

The tragedy in Newtown, Connecticut has me thinking a lot about Hamza and Lil D. Hamza, because he is so close in age and grade to the 20 little angels who perished last Friday. And Lil D, because he has an Autism Spectrum Disorder – he’s on the more severe end of the spectrum. News reports are saying the killer had an Autism Spectrum disorder – more specifically Asperger’s Syndrome, which is a kind of high functioning autism.

Several friends and acquaintances have forwarded me articles about how autism is not a mental illness (but a neurological, treatable disability), how it is not to be blamed for the Newtown tragedy, how there is no link between ASD and planned violence, and how individuals with autism are more likely to be the victims of violence. Autism Speaks, Autism Society of America, Asperger’s Association of New England and several other autism-related organizations have issued statements saying the same.

I’ve been forwarded the “I am Adam Lanza’s Mother” piece more times than I would like, as well as the subsequent blog post picking apart what Liza Long wrote. The blogosphere is on fire with posts on gun control, arming teachers, getting semi-automatic firearms banned, how to be responsible with gun ownership, as well as diatribes on the mental illness problem growing in this country, getting more resources to parents who are raising kids suffering from mental illnesses, and all sorts of articles on how autism has no linkage to planned violence.

I think these friends and readers of this blog (where I post a lot about Lil D and our autism/faith journey) are waiting for me to say something about this – to emphatically declare the same.

The truth of the matter is that I don’t know what to say. To move beyond just the sheer sadness of 26 people who lost their lives at the hands of one disturbed man is a near impossible task itself. I look at my own children and just cannot imagine it. I look at Lil D, and think back to the past year, fraught with self-injurious behaviors.

I’ve developed a thick skin when it comes to Lil D and the larger world, in being able to handle the stares when we are out in public, or being able to handle any off-the-wall behaviors he may have or meltdowns that may occur. But my resolve is shaken this week. How do people perceive him? Is it me, or are people stepping back from him more with suspicious looks when we are out? It feels like it.

Part of me is glad he is in a private autism school this year, sheltered and protected. The last year he spent in public school was very tough, and his teachers and fellow students rallied around him through his difficulties as best as they could, culminating in the sweetest, most touching fifth grade graduation ceremony at the end of the last school year.

I wonder if he was in public school this year (he would be in a new middle school if he was) – how would he be treated? How would this week have gone for him? Lil D has the advantage (if you can call it that) in the severity of his autism in that there is no questioning that he is very different. And though I cannot say for sure how he feels inside, it seems like he is nonplussed most times by the marked differences between him and his peers. But sometimes he, too, feels the difference. I can tell.

Many of my friend’s children, who have high function autism, struggle more profoundly with the differences between them and their peers. They feel that difference, and it can hurt them. Or, they don’t understand the difference, but they know they are being picked on, and that hurts them. But social problems aren’t necessarily the precursor to the kind of awful violence that happened in Newtown.

That there is no linkage between autism and planned violence, that is true, as far as I can tell. Priscilla Gilman, in the New York Times, gave a great summary of this:

“Underlying much of this misreporting is the pernicious and outdated stereotype that people with autism lack empathy. Children with autism may have trouble understanding the motivations and nonverbal cues of others, be socially naïve and have difficulty expressing their emotions in words, but they are typically more truthful and less manipulative than neurotypical children and are often people of great integrity. They can also have a strong desire to connect with others and they can be intensely empathetic — they just attempt those connections and express that empathy in unconventional ways. My child with autism, in fact, is the most empathetic and honorable of my three wonderful children.

Additionally, a psychopathic, sociopathic or homicidal tendency must be separated out from both autism and from mental illness more generally. While autistic children can sometimes be aggressive, this is usually because of their frustration at being unable to express themselves verbally, or their extreme sensory sensitivities. Moreover, the form their aggression takes is typically harmful only to themselves. In the very rare cases where their aggression is externally directed, it does not take the form of systematic, meticulously planned, intentional acts of violence against a community.

And if study after study has definitively established that a person with autism is no more likely to be violent or engage in criminal behavior than a neurotypical person, it is just as clear that autistic people are far more likely to be the victims of bullying and emotional and physical abuse by parents and caregivers than other children. So there is a sad irony in making autism the agent or the cause rather than regarding it as the target of violence.”

I look at my own son, and though he has lashed out at loved ones at times, it mostly happens when we are trying to block him from hurting himself. His aggression is almost always directed towards himself, which is heartbreaking. And we have spent a lifetime already trying to figure out the whys and the ways to help him – through behavior therapies, biomedical and holistic interventions, prayer, faith, dietary changes, and, yes, medicines. This is just one small part of him – there is his larger self, which is filled with sweetness, love, affection, and silliness.

As the news unfolds over the coming weeks about why the killer in Newtown, Connecticut did the horrible thing that he did, what disability or mental illness he might have had, I can’t help but be worried for the safety of all our children, including those who are living with an autism spectrum disorder. We are mourning the children and adults who lost their lives and the children and families who survived, but had their innocence shattered. One of the young ones who perished on Friday – Dylan Hockley — had special needs, and he was killed while in the arms of his aide, who also lost her life.

How many aides have taught and cared for Lil D over the years? Between my three kids, I tallied all the teachers, therapists, and aides who have worked with them. In nine years, more than 35 educators have educated and loved my children – at least 25 alone for Lil D. Teachers who believe(d) in Lil D. Love Lil D. Know that he has worth.

Bless the teachers. Bless the children. Bless the families. Don’t give up on children with ASD. 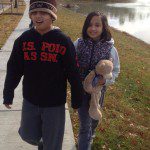 December 21, 2012 Khateebs - Please Talk about Newtown Today
Recent Comments
0 | Leave a Comment
Browse Our Archives
get the latest from
Muslim
Sign up for our newsletter
POPULAR AT PATHEOS Muslim
1