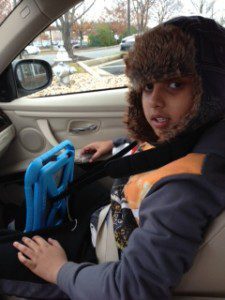 Ever lost your voice to a bout of laryngitis? It’s pretty frustrating not to be able to say what you want. One day you can talk, and the next day your voice is all hoarse and croaky and then the day after that you go silent.

Lil D lost his voice this weekend, and not to laryngitis. His iPad, his assisted communication device – his voice – was lost/stolen on Saturday on an outing to Target where we live in Central Virginia.

He lost his voice. A voice he (and we) have fought so, so, so hard to develop.

We went out to run some errands with the kids on Saturday, and I grabbed Lil D’s iPad and brought it with us, as I have been trying to condition myself and Lil D to take it everywhere and use it to communicate his wants and needs. At Target, we placed the iPad in the shopping cart (first mistake – I should’ve had him wear it on his neck like he does on community-based instructional outings with his therapists) and proceeded to shop.

Upon entering the store, Lil D was already antsy and tugging on his father, linking arms with him while showing the signs of an impending meltdown. We had been to two places already, and we were pushing it.

My husband suggested we switch to a larger cart where the boys could ride, so I got one and transferred our stuff over. We proceeded to shop and moved fast, because we could tell that Lil D was not having it.

You can do it son, just walk with us, and you will get to pick out a treat.

We wrapped up our visit in about 10-15 minutes and hit the checkout aisle, where Lil D picked out a Kit-Kat. My husband then took him to the bathroom and out to the car while I paid, keeping Hamza with me. Hamza and I took out stuff to the car, where Lil D and his dad were already seated. Hamza sat inside, I loaded our stuff into the car and put the shopping cart in one of the designated area in the parking lot.

Good job, Lil D. Thanks for behaving nicely in the store. Here’s your Kit-Kat.

On Sunday morning, I told Lil D to get his iPad.  He went to get it from its usual spot, and it wasn’t there – that was when I realized it was gone. It was just the most awful thing that could’ve happened on that already awful weekend.

I have been to Target several times in person and spoken with them on the phone, trying to get them to view the security tapes in the store and parking lot for the time that we were there. Wouldn’t you know, their one security guard is out having surgery, and without his authorization the tapes cannot be released. (Really? No one else can give authorization?) I have filed a police report. I figured the police could make Target show the tapes, but our local police says Target has to give authorization. Then the police can be called in.

(Ok, this is the rule because it’s considered a minor thing and not technically a crime yet – but, This. Is. Not. Minor. A child’s voice has been lost.)

Target’s store manager said she sent an email to the “powers-that-be” indicating the urgency of the problem. But you and I both know that nothing will come of that, and nothing has. I have spent hours on the phone and the computer chatting with Apple and talking to person after person in various departments, explaining the situation, trying to see if there is some way they can help us get another one at a discount. Yeah. Not very helpful.

I have been in contact with our school district, which provided communication devices to Lil D for years. When Lil D switched to the iPad, we bought him one ourselves because his class only had two to share. Since he was going to be learning it for the first time and we didn’t know if he would take to it, I knew the school district wouldn’t agree to giving him one solely for his use. Our special education coordinator said the best she can do is to get him another Go-Talk machine to use in the interim.

This, in my opinion, isn’t an option. To go back to another device now after working so long and so hard for Lil D to master the iPad, and now he is very good at using it for communication, it has the potential for confusing him and setting him back. And you don’t want Lil D to step backwards. It takes months to recover any gains he makes.

To say I’m angry with myself and frustrated with the all the walls I’m hitting doesn’t begin to describe it.

I’ve always strived to be an honest person, and that sometimes doesn’t serve me well at all in this life. I could’ve have filed a homeowner insurance claim that it was lost or damaged in our home, but that’s not what happened. I could’ve made up a story that it was outright stolen at Target to get the police and the store to actually pay attention to us, but the fact is that I’m not sure – either we forgot it in the cart and it was stolen, or someone stole it out of the cart while we were not looking.

At some point we will eventually get to see the security tapes, and maybe they’ll show nothing. My anger right now (which starts with me), is directed at the lack of help from Target. When I first went to the store to report the iPad missing/stolen, a young man in Guest Services, whom I had spoken with and explained the story on the phone earlier, said, “Oh, I remember you. Yeah, you’re not going to get it back. Why are you bothering to try?”

Seriously? Why am I bothering to try? Do you know anything about customer service? Did I not explain what this iPad is used for? Have you no decency or heart to even pretend to care?

The store manager was more sympathetic, but other than sending an email, that is where the buck stopped. I understand that it is our unfortunate luck that the security guard is out sick. But come on, someone should be able to do something. Anything.

The bitter fact that is becoming too clear to me is that with all the efforts being put forth for autism awareness, about the needs and challenges of children with autism — that hasn’t filtered down to the ground level. I can write until my fingers fall off, sharing ours and Lil D’s stories, and some people are touched. Some people have become more aware. But not enough.

Here’s what has become clear to me. At the end of the day, when it comes to the problems, challenges, joys and frustrations of raising a child with autism, including the detrimental effect that losing an iPad has on a child who relies on it to be his voice, it is only those connected with the autism community who truly understand and rise to help.

I sent frantic emails to Lil D’s teachers on Sunday night. His lead teacher quickly made arrangements in the school to check out one of two floating iPads to Lil D for the rest of the week and spent the first hour of Monday morning quickly programming Lil D’s most important boards into the Sounding Board app on that iPad. I put up a post explaining my problem and seeking advice in a Facebook autism group, and three mothers offered to lend Lil D their child’s iPad for a few weeks. One mother called and gave me sound advice about different people to speak with at Apple to plead our case.

These are all people (other than Lil D’s teacher) whom I have never met in person. We are just Facebook friends. But, as we have gotten to know each other through Facebook, sharing advice, seeking help and revealing frustrations and breakthroughs, we have a connection. I always say – those who know, know.

My husband has an office-issued iPad that stays mostly in our home. We’re using that for Lil D at home until we find a permanent solution. On Monday, Lil D’s home therapist, Amal and I spent time rebuilding boards on it.

But it is temporary, and it is not the same. His original iPad was completely tailored to him. We can retrieve the apps that were on it through iTunes or iCloud, but the way we customized Sounding Board for all the programs Lil D was working on and all his wants and needs – well that will take time to rebuild, and that comes after we figure out how to get him permanent new one.

Call me naive and stupid, but I can’t help and think – who would take a little boy’s iPad? If you looked at it, clearly you could see it wasn’t a typical iPad. It was encased in a blue grip case with a black strap threaded through it. If you turn it on, you would see all sorts of autism apps. His name and information is engraved in the back.

I start where I always do – with accepting my share of the blame for this. But the lack of urgency, the failure to go above and all beyond the call of duty from Target, that hurts. The willingness of autism moms — don’t even know me and Lil D in real life — to help me before anyone else offered to help, that proves what I have known all along. That if you have a child with autism, all children with autism belong to you. And the grief of their parents feels like your grief. 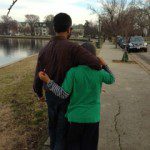 January 14, 2013
Sometimes All You Can Do is Live in the Moment
Next Post 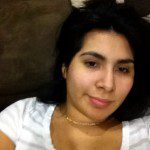