#JeSuisCharlie – When Will Clemency and Kindness Prevail over Extremism?

#JeSuisCharlie – When Will Clemency and Kindness Prevail over Extremism? January 7, 2015 Dilshad Ali

I’m wagering that when many of us (speaking to Muslims now, or people who have read a bit about Islam and the Prophet Muhammad, may peace and blessings be upon him) were growing up or first starting to learn about our beloved Prophet Muhammad (pbuh), we were told the story of the Prophet and the woman who threw garbage on him.

As the hadith goes, as this was told to me by my parents, when the Prophet Muhammad was trying to spread the word of Islam as it was being revealed to him by Allah (swt), he was ridiculed, threatened, persecuted, harassed and so much more by many around him. On a path he used to walk, there was a woman who upon seeing him, would empty her garbage from her upper window onto his head. She just hated the Prophet.

Day in and day out, as he passed by, she emptied her stinky, nasty garbage onto his head. He just kept walking. Until one day, when he was walking his usual route, he passed by the woman’s home, and no garbage was thrown on him. In fact, she didn’t even appear. The Prophet grew concerned and sought permission to enter the woman’s home.

Are you all right, he asked the woman. The woman was taken aback. She was sick, she explained to the Prophet. But why did he care? She hated him. She threw garbage on him. She wanted nothing but the worse for him.

Well, he explained (and of course I’m parphrasing), when you didn’t show up to throw the garbage, I was concerned for your well-being. Your well-being matters to me.

That, my friends, was a beautiful part of his nature. Now I’m not sure if this story is entirely accurate as I’ve told it, but what is accurate is that there are many recorded instances of abuse being hurled at the Prophet, and him reacting with clemency and noble character.

I was remembering this story this morning as I woke to the horrible news out of Paris, France, where three gunmen killed 12 people at the office of the French satirical magazine, Charlie Hebdo. The magazine, known for skewering a wide variety of subjects, including Christianity and Islam, had mocked the Prophet Muhammad on a number of occasions, as many other satirical publications have done in the past. Witnesses said they heard gunmen shouting, “We have avenged the Prophet Muhammad” and “God is Great” in Arabic, leading French police to believe it is an apparent “Islamist” militant attack, perhaps with ties to ISIS.

Yesterday I posted a story on my Facebook wall about how anti-Muslim marches are becoming the norm in certain parts of Germany, and how others are calling for reason and an abandonment of hatred. How the famous Cologne Cathedral shuttered its lights on the route of the anti-Muslim marchers, and how the floodlights were shut off at Berlin’s Brandenburg Gate in a gesture of solidarity with those against those protesting against Muslims and immigrants.

We talk about how we don’t need to condemn violence in the name of Islam anymore, about how we’ve condemned and condemned and condemned, and it’s all out there for anyone to hear. True. I get that. We also talk about how the ugliness and violence perpetrated by certain extremist groups don’t represent the faith of billions of Muslims the world over – that Islam isn’t the problem. Certain stupid, stupid Muslims are. I get that too.

But I want to ask those who seek to avenge the Prophet, who seek to enforce some extremist version of Islam – what are you thinking? Do you know who the Prophet was? Do you know what his nature was? Is blasphemy to be met with death and violence? I’m no scholar by any means. But there is no answer here other than No.

More than two years ago, fellow Patheos Muslim blogger Nancy Shehata penned a raw, frustrating post that got to the heart of what I think so many of us feel (in response to the rioting and violence that erupted when a video on the Prophet Muhammad, pbuh, was released). In “Speaking Out Because I Must,” she said:

Islam does not condone blasphemy against any prophet, be that Muhammad, Moses, or Jesus, peace be upon them all.  As a Muslim, I condemn the people who made or supported this video and ask Allah to guide them or break their backs.  But I have no plans to seek out these fools, or kill any Americans, or Israelis, or anyone else for that matter. See, I’m kinda busy.  I’m kinda busy working to support my family.  I’m kinda busy teaching my kids to memorize the Qur’an.  I’m kinda busy writing blog posts and articles and teaching people what Islam is all about.  And now I’m MORE busy because I have to take time from teaching what Islam IS to try to convince people of the truth of what Islam is NOT.  Islam is not terrorists crashing planes into skyscrapers.  Islam is not husbands beating wives.  Islam is not RPGs blowing up ambassadors.  How can I get to the IS when I’m so busy with the ISN’T?

No one is ever going to agree on everything. What is sacred to me will not be sacred to you, and I no more like the desecration of the Prophet Muhammad than I do any art exhibits or videos or anything that desecrate Jesus (blessings upon him) or other Prophets. We can all protest, boycott, condemn, rail against whatever bothers us, whatever insults us or our faith. But violence and murder? No.

Nancy said two years ago better than I can say it today:

There are no outside enemies who are hurting us worse than we are hurting ourselves.  As long as schoolgirls in Afghanistan fear acid attacks, as long as a widow who wants to remarry fears death at the hands of her son if she does, as long as billionaires are financing ego-stroking skyscrapers while orphans are starving, as long as heroin smugglers are hiding their product in the corners of mosques and markets, as long as girls are sold into marriage to pay debts, as long as children are being abandoned to popular culture, as long as we Muslims are not living according to Islam, we will be the worst human beings in the world.  It’s not the U.S, it’s not the U.N.  It’s not the satellite dishes or the fashions or chemtrails or anything else.  It’s us, damn it.  We’re falling short.

Two years ago Nancy wrote that. It’s still the same today. There are so many of us trying so hard to just live our lives as good Muslims, good humans, the way our faith teaches us, the way we learned from the example of the Prophet Muhammad. Peacefully, lovingly, faithfully. In the coming days there will be a rush to opine on the tragedy in Paris, to send prayers, to make the same arguments made a thousand times before, to condemn, to be silent in our sorrow (which doesn’t mean that we don’t condemn), to be vocal in our outrage.

Even now I’m wondering what good there is in writing this, in throwing this out there into the cacophony of screaming voices. Better live my life like I’ve always done – with as much dignity, class, faith, joy and even-handedness as possible. Raise my kids, help my eldest son manage his autism as best possible, be a good mother, wife, daughter, sister, friend, human. Be a living example as best possible for what I know to be good and true. Pray for those whose lives were so violently snuffed out, pray for God’s mercy, pray for His justice to be rained down on those who commit such horrors, pray for humanity.

"Is Allah Punishing Me?"
Mostly Muslim
Related posts from Muslimah Next Door 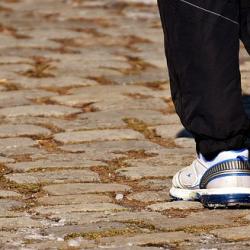 Muslim
When Your Child Wanders
Muslimah Next Door

Muslim
Muslim, Brown and Disabled - A Potential for...
Muslimah Next Door