Between Autism and Stoic Heroism 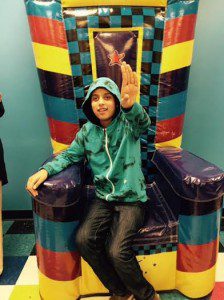 The words seem too paltry, too weak, to insufficient to fully express the depths of what I am seeing him do. I want to share it with you. But every time I let the words flow, it feels unsatisfactory — like whatever I write will not do justice to the truly astounding things I see my son doing. Because when I turn my attention outward, I see everything amplified – big, noisy, loud, glaring. And I don’t want to lose the beauty and true awesomeness of the small, the infinitesimal, the passing moments of sheer brilliance from my son.

I don’t want you to lose it either. To not understand how very important it all is – to see each other for who we are, who we are trying to be and what we are all trying to do.

I am sitting here in a bookstore writing, because writing at home has been an exercise in frustration and silence. No time, jumbling thoughts and no clarity as to what I’m hoping to convey. So I’ve brought myself here, after the kids have gone off to school, to see if I can pull it together.

A teenage girl and a young man, barely a few years older than her, come into the bookstore café and order a cookie. They sit at a table directly behind me, and I can tell this is hard for her. She is agitated, nervous, upset, repeating snatches of words and phrases, reminding herself to eat her cookie, chew and swallow. Her words and body are getting louder and louder. The guy, her teacher, offers her soothing words and directions to help her find her calm.

Suddenly she lets out a long, piercing shriek, causing me (and other sitting here), to flinch. I don’t want to. I really don’t want to have a reaction. I want to take it in stride, but it catches us all off guard. But soon enough, with the help of her teacher, she finds her center – eating her cooking, declaring Yummy, yummy.

And I’m so proud. So, so, so proud of her. This was hard, I can feel it – this whole exercise of coming to this bookstore café, standing in line, ordering a cookie, sitting at a table and eating it. Her teacher praises her and praises her. They are back in line now, waiting for a refill on her water, as the people in front of her order their complicated coffee drinks. With her teacher supporting her, she waits patiently.

It’s insignificant, but it’s not. It’s pretty significant, actually. And the calm, non-reactions of the patrons around us — offering encouraging smiles or continuing to quietly work – that’s significant in that it’s no big deal. It’s nothing remarkable that we are doing. It’s what we should be doing.

It’s that time of year again. The phone calls, text messages, updates on Facebook and messages passed back and forth on WhatsApp are coming fast and furious. Parents are sharing news about their kids who are moving on from middle school to high school, sharing news about what schools they got into, what special programs they applied to and where they were accepted.

Last year, my niece, who was born two weeks after D, was ecstatic to gain admittance to a prestigious academic program in a high school where she lives. This year, another niece who lives in the same town of us, also received a flurry of acceptance letters to various IB and honors programs she applied to. Many of the incoming ninth-grade children of my friends are in the same situation – waiting for letters or eagerly anticipating the move to high school, thinking what classes they’ll be taking.

We will have our own set of meetings soon, as D gets ready for the transition to high school. I’m thinking about the future, about when he turns 21 in seven years and his years of schooling come to an end. I’m thinking of what his next steps will be. And it’s all a big fat unknown. How will he want his day be structured? What will he do with his time? Will he be in a day program? Will he be able to hold any type of job? What kind of support will he get?

In the midst of all this, D shows us in the smallest of ways that he is doing his own thing, accomplishing his own great things. More and more he is bringing his iPad to us, on his own volition, and uses it to ask for what he wants. Granted, it’s usually chips or chocolate, but after four years of us prompting him to use his iPad to communicate, he is now starting to do it on his own. Huge.

Then, while showering the other day, I passed by the bathroom and yelled to him – you’ve got about one minute left, then we’ll turn off the water. Within a few seconds, I heard him turn the water off and step out of the tub himself.

He’s never turned the water off himself. Either I turn it off or I have to prompt him to turn it off. Yesterday while in the shower, he started to get upset. His therapist called out to him, hey buddy, you can end the shower if you want to. Whatever you want to do. It’s something we’ve all uttered to him a million times. But this time, he calmed down, and a minute later turned off the water and exited the shower by himself.

That’s a kind of self-advocacy that I’ve never seen from him – realizing that he can exert control over a situation that is not working for him, instead of me trying to fix things for him. I’m proud. I’m so, so, so proud of him. It’s insignificant, but it’s not. It’s pretty significant, actually. And even now, in writing this, I can’t seem to convey how huge this all is. I don’t want to lose the significance of this amidst the daily struggles and challenges he faces.

And I think about this, written by Naoki Higashida in “The Reason I Jump: The Inner Voice of a Thirteen Year-Old-Boy with Autism”: Normal people think we’re highly dependent and can’t live without ongoing support, but in fact there are times when we’re stoic heroes.

March 26, 2015 The Ease and the Glory
Recent Comments
0 | Leave a Comment
Browse Our Archives
get the latest from
Muslim
Sign up for our newsletter
POPULAR AT PATHEOS Muslim
1