Guardianship and the Rights of Adulthood

With less then six months to his 18th birthday, the timetable I had laid out for myself had me picking up the phone and making the call to the lawyer.

Hi Patrick. It’s Mrs. Ali. Remember when we had met in November to discuss obtaining guardianship and conservatorship for D? You told me to call in March. Well, it’s March.

Our lawyer asked me to gather some paperwork, which I already had, and drop it by his office during the week. He briefly explained the process, telling me he would be filing a lawsuit. Why are we filing a lawsuit? Who am I suing? I asked him. I thought we were just applying to the court for guardianship.

We’re not suing anybody per se, he told me, but we have to file a suit. Because essentially we are petitioning the court to take away somebody’s rights. That he will remain in this adolescent stage, so to speak, where you will maintain the status quo for him.

The words struck me hard and deep – taking away somebody’s rights. I guess that’s what guardianship is – taking away your child’s rights to self-determination in the eyes of the law, because his disability impedes his ability to do this, and keeping those rights in your hands. And, although for some people like my son, this needs to be done, it doesn’t make the legalities and language of it all any more bearable. In fact, it makes it all the more unbearable.

Later that evening I told my husband about the phone call, about the language the lawyer used in our conversation. We had eaten dinner and cleaned up. He was on the sofa cueing up On Demand to watch his nightly fix, Stephen Colbert, while H snuggled next to him, playing some game on his Baba’s iPhone.

Did you hear me? I asked him. The lawyer said essentially we will be filing a lawsuit because we are petitioning to take away his rights.

Doesn’t that bother you? That language?

He’s not a callous man. He has great love for his children and family, and I know the trajectory of D’s life has irrevocably shaped him and changed him, as it has me. But I wonder why things don’t devastate him like they do me. Why is it that these milestones, which I knew were coming years ago, squeeze my heart with a relentless disregard for all that is practical, sensible and predictable? I am ok with all of this, and yet I am not. Maybe I would do better to accept and love what is and not allow these legalities and monumental moments in our lives undo me.

And yet here I am, perseverating over these words – take away his rights.

A few months back a friend of mine, whose brother (like D) is autistic, messaged me after coming back from court from her parents’ petitioning for guardianship for him. She told me that they were all a little emotional, her parents a little less then her because they always believed in their right to care for him and help support him.  She, however felt like she was taking away his rights:

I know this is best for him, but we always had hope that when he gets older — it’ll all be better. It has been better, but I don’t know why I feel so emotional about it. Now we are starting a new journey into “adulthood.”

I wrote back to her, and at the time I had the right words — I’m feeling pretty emotional about the whole thing as well for the reasons you are – about taking away his rights, although what we really are doing is securing our rights to keep supporting him in every way he needs. It’s up to us to make sure his independence and voice is being heard, what he wants for himself is being honored.

It all sounded good, and I meant it when I wrote it. But, I’m caught in an unsettled loop, sure as I can be that what we are doing is what needs to happen, while buried by the weight of it all, by these parental decisions we make to try and give our children the best possible chance at a good life for themselves. We birth them, feed them, clean them, teach them, discipline them, raise them, push them, guide them, fight for them, worry over them and pray they will carry themselves through to an adulthood of their own making that is influenced by our making.

Because in parenting our children, it is to an extent an exercise of us imposing our will on them, because we know better. Because we know they need to learn certain things and appropriate behavior to become functional, intelligent and hopefully strong and independent human beings. But, it strikes me as a catch-22.

It is now, as D barrels towards his 18th birthday, a product of his own strong and intelligent self as well as our careful (but sometimes muddled) and good-intentioned upbringing, that the thought of legally taking away his rights in obtaining guardianship sits as an uncomfortable necessity in the pit of my stomach. The law may say one thing, but we actively choose to say something else. I comfort myself in thinking that in no way, shape or form, despite what the law says, will I ignore what he is trying to tell me or trample on his rights to do or not do that which makes him feel safe, happy and at peace.

That is my promise to him – to do better. To never stop trying to do better — not just by him and for him — but with him. 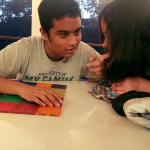 March 27, 2018 What Does Being "Unapologetically Muslim" Mean?
Recent Comments
0 | Leave a Comment
Browse Our Archives
Related posts from Muslimah Next Door