The First 14 Days of Lent

I would look at the people in my life growing up and see them having a routine tradition.  I would be invited to sample their lives and when immersed in the activity, I could feel that thing that I really wanted.  But that thing that I was searching for wasn’t the routine.  It wasn’t the tradition.  It was the feeling you get from being in an environment where everyone gets it.  They love each other, they like each other, they just get each other and they share the love of the thing that they are doing so much, they do it together in a routine way.

I look at the routine tradition of Ramadan and I really want that thing that I see happening in my family.  I can see it in my children and I can see it in my husband as he shares Ramadan with them.  It’s that peaceful, knowing, “we are in this together” kind of thing.  They look forward to Ramadan.  They do!  I don’t understand how they do it, but when Ramadan is approaching, they get all excited and start talking about their plans.  During the fasting, they don’t complain often.  They know that they are in solidarity with millions of other people doing the exact same thing.

I think I was in high school when I started realizing that people did something in the months leading up to Easter.  My family didn’t.  The only thing we did was color eggs and my mom would buy a truckload of candy.  We would get new clothes and go to my grandma’s house.  Sometimes we would go to the Lutheran church down the block, but most often not.

My cousins are Catholic, just like my grandparents and my aunts and uncles.  I don’t know if they ever did anything different during Lent.

One year when we were still traveling to Egypt, we went in the Spring.  We took stuff to color eggs and some jelly beans.  A small bit of chocolate and some Easter grass.  Khaled lived near some Coptic Christians and while he was growing up, he would color eggs like the neighbors.  So, when we were at Naina’s house coloring eggs, it was no big deal.  But then they turned on the tv for me so I could see the head of the Coptic church wish everyone a Happy Easter and I cried.  It was so meaningful to me that Naina made sure to let me know that she accepted this part of my life.  Maged wished me a Happy Easter.  I cried because I soo wanted a deep emotional connection with this event in Christianity but it was a hollow, empty tradition filled with egg colors and candy baskets.

The last few years, I’ve learned more about the routine traditions that take place in the lives of my friends.  Also, because I have a teenage boy in my house, when paczki are being sold during February, we buy the boxes in triplicate every trip to the grocery store. 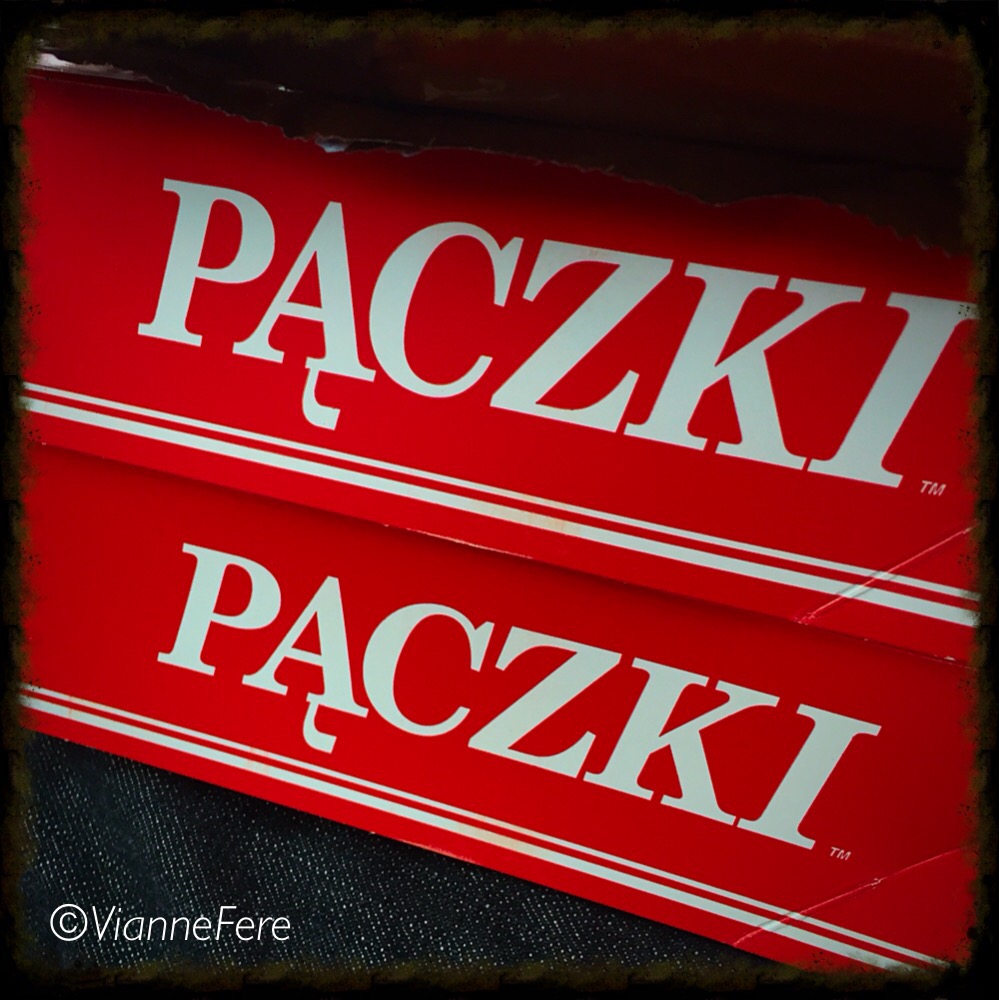 This year, my friend did an experiment and asked people if they ate something special before Ash Wednesday.  A lot of people ate pancakes on the Tuesday before.  Some traditionally ate paczki.  We found that it was a regional thing that centered around nationality.

About that same time, when everyone was talking about Lent starting, that same friend invited us to participate in an observation of the 40 days.  It was more than just giving up chocolate or swearing, it was a mindful, routine prayer.  Every day, for the next 40 days, you would pray for 5 people.  Morning, Afternoon and Evening, you would pray for these same 5 people.  It didn’t have to be someone you were close to, or someone particularly religious.  You also would pray for something that was inconceivable, but something you dared to dream.  It had to be so big that you were afraid to voice it in prayer.  She said that it was a modified version of the 40 Days of Prayer that she participated in at her church in New York. I immediately thought that this was something I could do.

It doesn’t require me to attend church.  It doesn’t require me to inconvenience my family in any way.  Basically its a win-win.  I could attend church if I had a church to go to, but I don’t. If I needed to do something that was really important but inconvenient, my family would figure it out. But this is more private, so if I screwed it up my kids wouldn’t notice.  I like to screw up as little as possible in front of them. The thing is, I needed to make myself accountable.  So, when I stumbled across the Eid.Pray.Love community on twitter, I knew that was the way to make a promise to myself and something bigger.  That way, if it got difficult and didn’t feel good, I wouldn’t give up.

I went to #Muslims4Lent on Facebook and posted my pledge on February 19th. 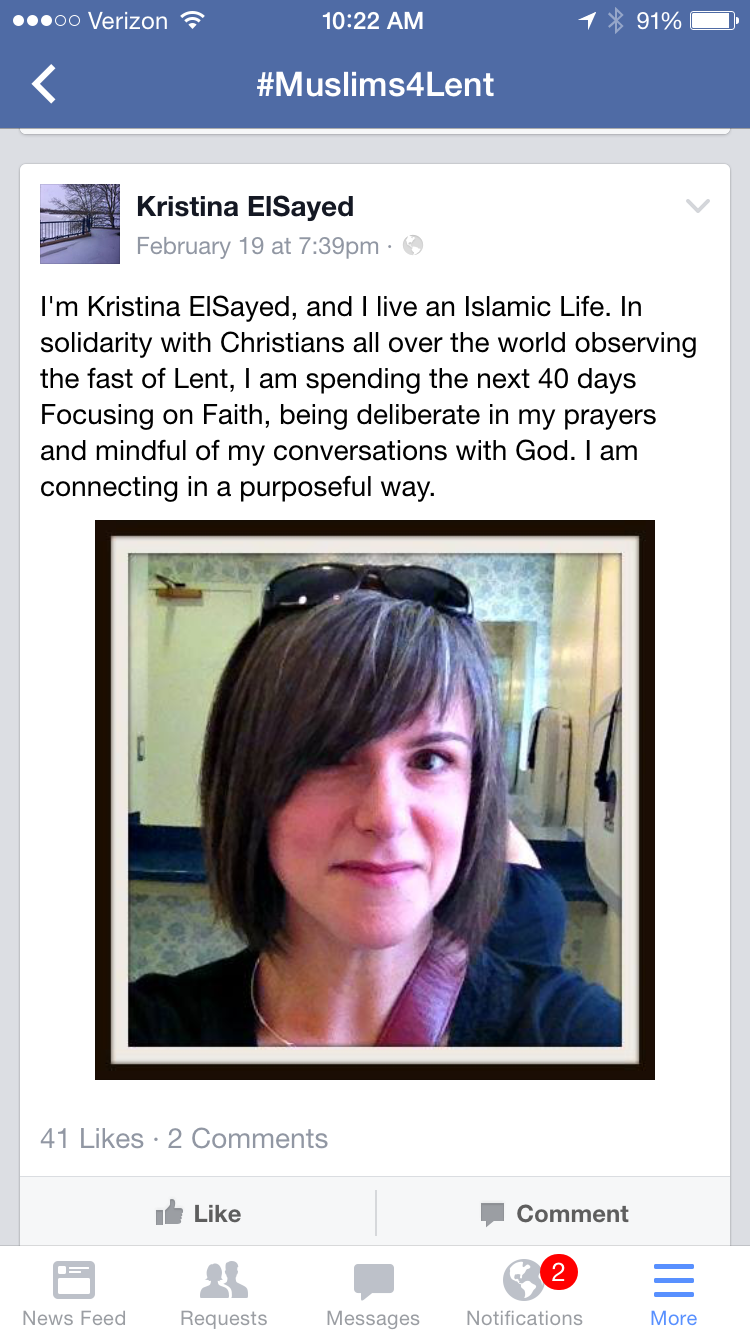 I was a day late to the game, but I wanted to make sure I was committed.  I invited everyone on my Facebook to pledge, and I shared it on twitter.  Now that this was out there in the world and I was holding myself accountable, I had to figure out a way to make this happen.  Kind of like how I have to make myself leave the house to exercise and I have to force myself to get to know the instructor of my class.  So, I feel accountable.  Otherwise, I’ll take the easy path and do something that feels good at the moment.  Like reading a book, or vacuuming.  I got out the super special “leather” journal I bought last year at Hogwarts (Universal Studios) that I had been saving for something really important and my heirloom fountain pen and made a plan. 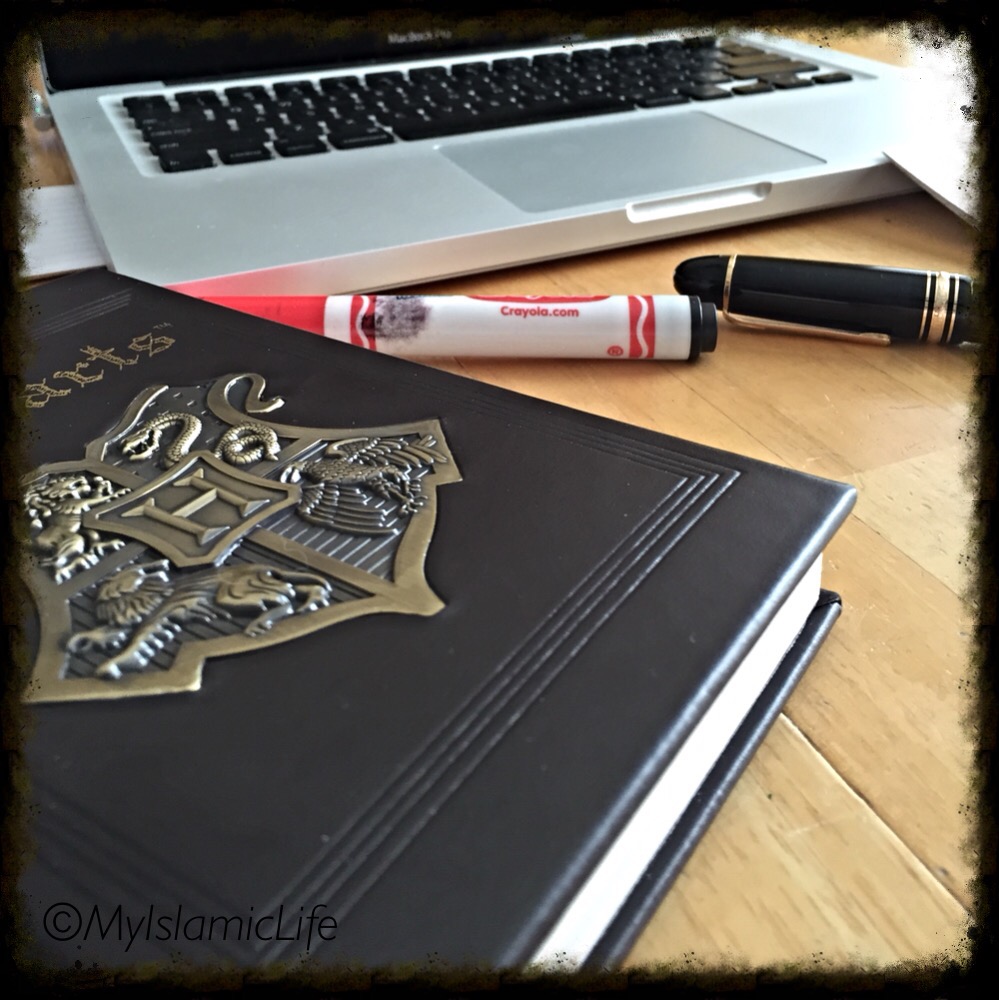 I would write in this journal at least 1 time a day.  I would write down my prayer each day so I had something physical to do to feel more grounded to this…it would feel more special, and I wouldn’t forget to do it.

That first day, I listened for the names of the people who I needed to pray for and I had 3 names.  The second day I added the 4th.  It wasn’t until the 6th day I had all 4 names of the people I needed, and now I’m not sure if I have the correct last names, but I know I have the right first names.  Odd isn’t it?  I also still don’t know my Big Ask.  I asked for some guidance and my friend said that she chooses something that will set off a domino effect.  I’m not sure what mine will be yet.  I’m still listening.

Today makes the 14th day of my commitment.  I don’t know how long you need to do something before it becomes an ingrained part of your life, but I can tell you that I already feel different.

April 7, 2015 The Lenten Prayer Experiment
Recent Comments
5 Comments | Leave a Comment
"Real friends are gems to find. It's sad to think how long you can be ..."
Aloha 😛 Stepping Up When Big Deal Things ..."
"It's been a great article. Thanks. A life suitable for Islam can be experienced all ..."
Karlı Selim Dahlia Qadri, Intern, Hijab and International ..."
"I congratulate you. It's nice to be a muslim character. I will follow you very ..."
Karlı Selim Not a Hot Take…But the “B ..."
"I have no knowledge of the Bahai faith."
Kristina ElSayed My Journey with The Story of ..."
Browse Our Archives
get the latest from
Muslim
Sign up for our newsletter
POPULAR AT PATHEOS Muslim
1

Muslim
Egypt, InterConnections and Being Brave
My Islamic Life

Muslim
InterConnections and Me
My Islamic Life
TRENDING AT PATHEOS Muslim