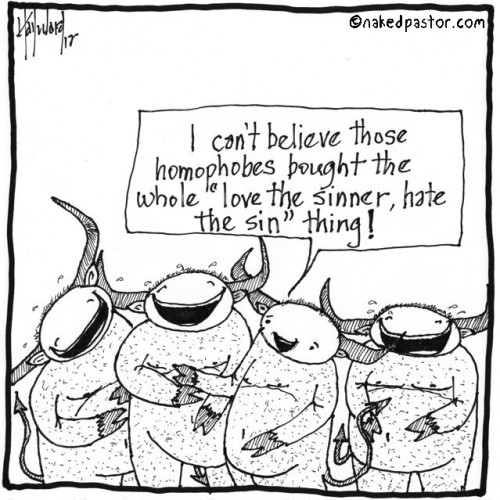 There are just so many problems with that idea I can’t even try to begin! For example… right off the bat homosexuality, never mind homosexual activity, is a sin.

But more than that, it attempts to draw a line between the person and his or her state of being, his or her life. It fragments the person, which is violence.

What if heterosexuality was a sin? How could one say, “We love you as a person, but we hate heterosexual behavior, and we have no respect for your orientation as a heterosexual. Even your being heterosexual is problematic.” How could you even begin to divide a person in such a way?

** HEY!! I’ve started a FORUM feature over on david hayward, and there are already some discussions started. Please join!

Purchase the original drawing or a print of it!

Howard Thurman's Contemplative Activism and the Spirit of...
Can you be both a mystic and a social activist? Can you...
view all Progressive Christian blogs
What Are Your Thoughts?leave a comment
Copyright 2008-2017, Patheos. All rights reserved.