Life’s Tsunamis and the Four Stages of Denial

(*** Get a fine art reproduction of this cartoon!)

I watched a very powerful and moving documentary on the great tsunami of 2004, “Tsunami Caught on Camera”.

What struck me most was the absolute bewilderment of the victims from beginning to end. I completely identified with these people and my heart was filled with empathy for them. The event was just so far off the radar of their experience and knowledge that they simply could not make it fit into their intellectual, emotional and even spiritual matrix. I could see what I’ve called the four stages of denial at work. Others probably have observed stages of denial, but these are my observations that emerged from watching the documentary.

I have had a few tsunamis in my life. They do not nearly measure up to the gravity of the Great Tsunami of 2004, but it functions as a suitable analogy to life’s traumas.

One of the greatest tsunamis life threw at me was a church split in 1997. I was the pastor, and I never ever thought it could happen to me. It wasn’t even on the radar of possibilities. When it started happening I still couldn’t believe it. Even when it crashed over me and the church during a Sunday morning service, I couldn’t figure out what in the world was happening. Still to this day I don’t comprehend it. After cataloging all the devastation it left behind, I simply cannot believe it. I keep a journal, and as I read that episode the dominant theme is overwhelming confusion. There are simply no words.

What about the deconstruction of what we thought were essential beliefs? Watching our infantile and inadequate belief in God crumble before our very eyes is one of the most devastating tsunamis life can throw at us, and the quicker we realize what is happening, the quicker we can act to save our spiritual wellbeing. This is what many people are doing at The Lasting Supper. Kudos to them!

There is one video of a man just standing in the water looking at the wave as it crashes over him. People are shouting, “He doesn’t want to move!” He must’ve been paralyzed by “This can’t be happening!” Of course he didn’t survive. Denial is a coping mechanism. Sometimes it is useful to protect us from fatal emotional damage. Denial can help us keep trauma at bay while we let it in by measures. But sometimes it is not useful because it may prevent us from saving ourselves on time.

What about you? What kind of tsunamis were thrown at you? Do you see any of these stages of denial at work in your attempt to survive it? Is your denial useful or not? 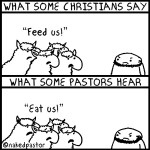 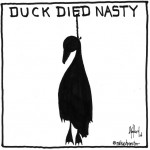 Stop Telling Me about the "Lazy"...
Honest to God
Related posts from nakedpastor

Marc Leishman Wins Farmers Insurance Open
Marc Leishman from Australia shot a seven-under par 65 to come from...
view all Progressive Christian blogs
What Are Your Thoughts?leave a comment
Copyright 2008-2017, Patheos. All rights reserved.