This Is No Time For Cyclic Thinking

This Is No Time For Cyclic Thinking January 30, 2017 Melanie Morel-Ensminger

As a Unitarian Universalist who identifies theologically as pagan-christian-humanist (not always in that order), I usually am able to navigate my way through the three views of time represented by those hyphenates.

Paganism has a circular view of time, or rather, spiral.  Everything in nature moves in a cycle, from the seasons of the year to the phases of the moon to the stages of human life. This perspective offered human beings a sense of continuity, a reminder in the coldest winter that spring was just around the corner, that the darkest night brings the brightest dawn. For thousands of years, human beings followed the circular path of the mother goddess and her consort the dying and reborn god, and were comforted and strengthened by their place in the spiral immutable nature of time.

Christianity began as a heresy of Judaism, and retains the Jewish idea of time as a straight arrow moving towards fulfillment of a divine plan, no matter what present-day tribulation is being experienced, but with the added refinement of the idea that one individual can alter the path of history.  Christians see Jesus of Nazareth as breaking into the story of humanity and changing its course forever.  For Christians, the notion that one person can have such a powerful and long-lasting effect on the world is both comforting and strengthening, proving to them that individual human life has value despite great historical forces moving in the opposite direction.

Despite being considered by  many orthodox Christians as a heresy of Christianity, Unitarian Universalist has inherited this view of time.  Note especially the old Unitarian motto:  “Onward and upward forever.”

All of life is one big spiral that we humans can neither control nor affect — human life moves in a straight line of progress to an inevitable goal — one person can make a difference.  These are the views of time in paganism, Judaism, Christianity, and Unitarian Universalism; all have value, but all can also be fairly and legitimately critiqued.

Too much reliance on the circular nature of life can produce resignation and apathy and acceptance of injustice.  If everything just goes round and round in a pattern that you cannot change or have any effect on, then there’s no use in working to end oppression, in striving for liberation.  Indeed, in many pagan nature religions, one’s place in this life is predetermined by acts in previous lives and thus it would be WRONG to rebel against one’s divinely appointed role in the spiral round of life’s wheel.

Giving too much credence in the idea of a divine plan for humanity can also stunt growth and development.  If things are working out the way God has planned, who are you to have the nerve to complain?  It can also lead to arrogance, to the notion that you know what God wants.  Such misplaced assurance has led many times in human history to acts of vicious cruelty and intolerance, all in the name of doing “God’s will.”

The raising of the importance of the individual that derives from Christianity and the humanist traditions that followed is one of the most important values of Unitarian Universalism.  “The inherent worth and dignity of every person” is the first principle of our liberal faith and to many UUs it is the most important.  But an over-reliance on the primacy of the individual has inevitable negative consequences — the despoliation of the earth in the cause of human comfort and materialism, the rise of dictators and despots.  One person can indeed make a difference — but that difference may not always be for the good.

As a Unitarian Universalist, I generally strive to live my life in dynamic tension with these competing views of the nature of time.

I try to honor nature in the manner of my pagan ancestors, to be in tune with the changing of the seasons, the monthly cycles of the moon, the pull of the tides both within and without.  Especially now in my sixties, I see there is much that is positive in seeing all stages of human life as having intrinsic value, instead of the relentless celebration of youth that found in popular culture.

But right now, at this stage of history, I don’t find it useful to see myself as trapped in a circular round of rebirth that I cannot influence.

And it would be lovely if I could see where we are right now as connected to a human history that is moving towards a desirable, if not divinely appointed, goal.  It would be lovely, but I cannot do it.  I would love to tell myself that the Universe “bends toward justice” but I just don’t see it. And forget about “Onward and upward forever” which just seems like uselessly optimistic bullshit at this point.

Right now, I can’t make myself believe that one person can make a difference.  A one-person letter-writing campaign or one-person protest is not going to be very effective.

What I see working right now are coordinated organized groups of diverse people making their voices heard, flooding the offices of their elected representatives with emails and phone calls, and putting their bodies on the line to save our country and our values of freedom, inclusion, and justice for all.

This is no time for cyclical thinking. Things will NOT get better on their own. We all need to act, and act with others, and act soon. Or it may be too late. 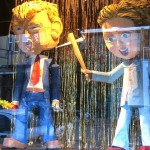 February 2, 2017 Join the United Nations World Harmony Week 2017 Webinars!
Recent Comments
0 | Leave a Comment
Browse Our Archives
get the latest from
Nature's Sacred Journey
Sign up for our newsletter
POPULAR AT PATHEOS Pagan
1