There is a tired old maxim stating that the only thing constant in life is change. Seasons change, people change, societies change, nations change. Some of my Devotional Polytheist friends would claim that even the Gods Themselves change. As a result, I’ve tried to adapt this maxim as a key tenet of my life: nothing can ever stay static, no matter how much you will or wish it to do so.

Of course, anybody that knows me personally would be quick to point out that I have failed spectacularly at this. Among other sins, the first decade of my professional life was spent in the mainframe computer business; not an area of the technology sector known for its’ lack of romantic sentimentality. While the great machines themselves continue to advance at the rapid-fire pace demanded by their customers, the men and women who build and operate them often can’t help but work with one eye backwards, seeing ancient visions of Priests and Priestesses bedecked in white and black robes, of smart haircuts and horn-rimmed glasses, and of gargantuan computers installed as working showpieces in rooms of glass [1].

I find that generally Neo-Pagans tend to be the same kind of romantics that mainframe engineers are.  We look back to a treasured past, whose apparent rosy and shiny edges have been artificially polished by the hopes and desires of our present minds, but which make the images no less powerful, important, and worth striving for.  And like the mainframe engineers I’ve met, the best of us are scholars and scientists of a sort.  ADF Druids and Reconstructionist polytheists can be a particularly bookish lot; the ADF Dedicant’s Path requires a substantial amount of reading and essay writing that has force-started the career of more than one Pagan blogger [2].  But even the more casual Pagans read lots of books (yes, Llewellyn books most certainly count), giving us the nickname “The People of Books” [3][4].  And anybody that has tried their hand at magick or sorcery is a kind of esoteric scientist.  The traditional “book of shadows” favored by many Pagans is analogous to a lab notebook, tracking what magickal workings were done when and what occurred as a result [5].

Us Neo-Pagans are a curious and sentimental lot.  We’re seekers, dreamers, readers, and lifelong learners.  Many of us read about a past that may or may not have been [6], learn about techniques and technologies that we can use to connect with the Divine, poke at It to see how It works and if It wants to be friends, and then try to bring to the present a working vision of that often-idealized past and a living connection to the Divine.  In looking back toward a distant past that some of us wish had not been snuffed out by change, we are in fact bringing the change we want to see, and dare I say some of the idealism that comes with it, into the present-day.

So, why am I harping on all the change?  Because this is my last regular contribution to Nature’s Path.

I have been lucky to be a contributor to Nature’s Path for a full year now, starting with Communicating With Deity: All The Small Things back in February 2016.  It started as an off-topic entry on the personal blog that I use to house my ADF Dedicant’s Path writings.  I felt that I had something important to say, and so I reached out to David Pollard to see if he would be willing to run it as a one-off article on Nature’s Path.  Instead, he offered me my own monthly slot on this blog.

And so much has changed for me over these past twelve months.  A number of my Nature’s Path contributions were well received, and two were even picked up by The Wild Hunt‘s periodic High Day link roundups.  I have worked hard to build up my skills as a writer, and feel blessed to have had the opportunity to discuss both historical and contemporary topics with the large audience that this platform provides.

I’m leaving now to take up an opportunity for my own blog on a new Pagan blogging collective, paganbloggers.com.  In doing so, I’m hoping to support some of my good friends who are involved in the project, such as Laine Mardollsdottir, Dee Shull, and Jhenah Telyndru.  I’m also hoping to make new friends, and develop my own voice a bit more.  My new blog will be called Black Keep and Meadowsweet, and is named in honor of my family’s patron Goddess, Áine.

And so with one door closing and another opening up in front of me, I’m taking one last moment to look back on it with the romantic eye that is both my curse and gift.  I wish to thank each and every person who read one of my articles, especially those who commented on them with corrections, criticisms, and thoughts (WoodsWizard and Jason Mankey are the two most common culprits here).  I also want to thank my spiritual kin who often proof-read my articles before they “went to press” (you know who you are).  And lastly, I want to give a big thanks to David Pollard and CUUPS Continental for giving me this platform on which I built my voice and learned to sing.

A few paragraphs up, I wrote that us Neo-Pagans tend to be curious dreamers, and that by re-imagining a distant past, we are bringing change into the present day.  It is my hope for all of us that the change we bring be positive, life-affirming, and long-lasting. 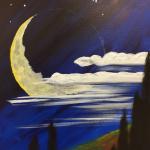 March 1, 2017 At Home on Patheos, Where Interfaith is the Secret Sauce
Recent Comments
0 | Leave a Comment
Browse Our Archives
get the latest from
Nature's Sacred Journey
Sign up for our newsletter
POPULAR AT PATHEOS Pagan
1