Sponsored by NbA Muslims and Muslim Girls Read, the event offered poets, writers, and authors of a range of books the opportunity to share their words with a captivated audience.

Ustadh Saajid opened with Qur’an recitation and outlined the Islamic significance of writing and writers.

“Allah says in the Qur’an, “Allamahu Al-Bayan [4-55].” Allah taught man the ability to express himself. There are many ways to express [yourself], writing being one of them. It serves as a reminder. When we write things, we report things, and it makes easy for us to refer to those things to remind us.

“Just as we refer to the Qur’an and Hadith, [we] can also refer to other information—poetry, storytelling and things of that nature—which are very important for the Muslims.

“It’s not saying that the Qur’an and Sunnah aren’t enough for you. Sometimes people want to look at others [who] may have been in similar circumstances. They want to know other people’s stories and how they were successful or how they made it or what advice they give to succeed in life.”

A panel of young Muslim writers served on the panel to discuss building narratives, audience and honoring cultural experiences and modes of expression. As Muslim authorship and readers grow, writers must decide about tensions between their art and audience.

With such an emphasis put on dawah in Muslim culture, writers also talked about their motivations in reaching people outside of their experiences and changing the world.

“I write, and I think I try to change my own conversations first and the discourse that happens in my communities,” said Haddiyah Ali.

“I do hope writing has an impact on people around me, but often my writing starts with me grappling with my own emotions about a subject and then reaching out to people around me.”

Nzima Hutchings talked about writing to bring attention to issues.

“You are putting out things that could potentially move one’s mental furniture pieces. So, [sometimes] I am purposeful and intentional in my writing. I have a few pieces that I have written because I wanted to highlight certain areas about our [Muslim] life, our names, our clothing [and] polygyny—different topics that people question Muslims about—with the hope that I move things around a bit. So that way, others will have the opportunity to think, be open and not so closed-minded.”

“I write to put myself in stories that I would have liked to see myself in,” said Juwayriyah Ayed. “That’s usually where I get my ideas from—based on things that I love—placing myself in those stories. What would that be like? What would that look like?”

The panel also discussed challenges Black Muslim writers face in sharing their narratives and tensions across social intersections with their expressions.

“Oftentimes, we have to justify even telling our stories to somebody—to an editor or potential readers—even to ourselves at times,” said Ali.

“When I am writing, I am writing from who I am, I can’t write from someone else,” said Hutchings.

Our Voices and Language.

Many American Muslims infuse Islamic words and phrases in Arabic into their vernacular.

Muslim authors usually must decide if they will integrate terms like As-salam alaykum, bismillah, alhamdulillah, etc. into their text, especially if they feature Muslim characters. Ali, Hutchings, and Ayed talked about writing Arabic in their books and if italics and translations are necessary.

“The best works that I have ever read come from a place where I feel like I know the writer after I read,” said Ali.

“They are so vulnerable and so truthful in their own narrative that it requires me to go outside of myself, come and meet them and enjoy their honesty and enjoy that rawness.”

“Writing is a labor of love. It is also a labor of pain. There is a lot of emotion that goes into it. As a reader, I think it is an honor to hold those words, and to hold that story and for me [then to] do some work, as the author has already done the work to present it.

“[When] translating, it centers the gaze of whoever the reader is—whatever they can understand and experiences they have. It creates that as the dominant. Whatever I have [as a writer] should get the back burner, and I should be doing the work to come and meet you when you should be doing the work [as a reader] to come and meet me. So, I don’t translate.”

Ayed explained the significance of appreciating the importance of cultural vernacular when writing about and connecting to experience as opposed to focusing on the dominant society.

“I think it is okay to tell White readers that not everything is for them,” said Ayed.

We don’t write with the intention of making them read. I use the words I use every day—as-salam alaykum, masjid—words like that. If you don’t know what that means, you are welcome to look it up, but I’m not going to explain it to you. It messes up the flow of the book.

Authors delighted readers with readings from their books. Nzima Hutchings read from her books, including She Wrote It… Then Spoken Worded It. Julde Halimah Bell read from her memoirs, Growing Up an American Muslim Army Brat and shared her experiences of prejudice inside and outside of Muslim culture. Haddiyah Ali treated readers with her creative nonfiction stories.

The authors inspired audience members to share their writing during the open mic session. 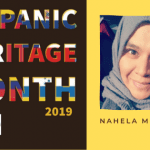 March 15, 2020 Black Muslim Women Working Months of Intersections
Recent Comments
0 | Leave a Comment
"We are here to listen your query:4695469082Email us:info@thecustomboxpackaging.com"
Sami Ullah BOOK REVIEW: The Packing House – ..."
"I recommend a name change to “World Suppression of Women Day”."
Kibosh Latina American Muslimah on Khimars and ..."
"Once Muslims stop thinking of women as fourth class citizens, I would be happy to ..."
oneworlddude Should Muslims Rock the Vote?
"Lovely article. Keep up the awesome work sis! We love you!"
Omera Omera Parent Asks for Islamic Books With ..."
Browse Our Archives
Related posts from NbA Muslims