Umm Juwayriyah is the founder or Muslim Girls Read and co-editor of the Black Muslim Reads Anthology. She tells Layla that she began writing in the fifth grade and talks about her motivations for writing. 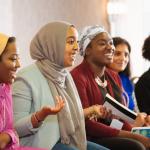