How the Apostle Peter Reconciled a Good God With Pain and Suffering April 30, 2019 Josh Daffern

In the first century, in the Middle Eastern province of Galilee, part of the larger Roman Empire, there was an uneducated, most likely illiterate fisherman named Simon. He spent his days sleeping and resting and his nights fishing on the sea of Galilee to try and scrape out a living. For all intents and purposes, we should never even know Simon’s name, because he never ruled a country, he never led armies, he never built lasting monuments. But we remember this uneducated redneck fisherman because of his association with the worst thing that could have happened to the best person in history, a very dear friend of his. If anyone could address this issue of why God allows bad things to happen to good people, he could.

When we first encounter Simon, it’s because of his proximity to a new rabbi (teacher) that began to preach in Galilee named Jesus of Nazareth. Pretty soon after his ministry launched Jesus saw something in Simon, gave him the new name of Peter (rock) and well, the rest is history. At the end of his life, Jesus was betrayed by one of his own, Judas, and executed by crucifixion. Today we wear crosses as a piece of jewelry and put them on our steeples, but in church history crosses didn’t appear in Christian art until every generation that personally saw a crucifixion had died. No one who lived through a crucifixion ever thought to use a cross as art. That’s how barbaric, painful and cruel it was. And that’s what Jesus went through. That’s a really bad thing that happened to not just a really good person, but a perfect person.

But even in the light of that horrifying tragedy, Peter doesn’t disappear into the recesses of history. He shows back up. In fact, he leads the church in its early days. About 30 years after the events of the crucifixion, Peter is in Rome and writes a letter to this new movement called Christianity which had begun to spread all throughout the Roman Empire. And in this letter, what we know of as 1 Peter, we see him tackle the issue of why bad things happen to good people in a way we wouldn’t expect. Here’s how he starts:

Praise be to the God and Father of our Lord Jesus Christ! 1 Peter 1:3

So even though Jesus suffered the way he did, even though the worst thing happened to the best person, Peter concluded that Jesus was in fact Lord, he was in fact God. How in the world could he believe that after what he saw and experienced? And how could he be so happy and give praise to a God that would allow Jesus to die?

In his great mercy he has given us new birth into a living hope through the resurrection of Jesus Christ from the dead, 1 Peter 1:3

It all hinges on the resurrection. The foundation of Peter’s faith wasn’t tradition, a building, the Old Testament Law or even the teachings of Jesus. Peter had all that and he still abandoned the faith when Jesus died. His faith was based on the resurrection. When you see your best friend die and then you have breakfast with him the next week, that changes you.The resurrection gave him and gives us new birth into a living hope: a hope that grows every day as you follow Jesus, a hope not just for this life but for the life to come.

What’s amazing is that this man, who saw his close friend (best friend) Jesus unjustly tried and crucified. In Acts 12 one of Peter’s other closest friends, James, was executed by King Herod for his faith and Peter himself was thrown in prison to meet the same fate. This guy, who personally walked through more pain and suffering than most of us ever will, within a few short verses of starting his letter talks about praising God and this living hope that fills us. How in the world could he believe in a good God in the midst of all that pain and suffering?

and into an inheritance that can never perish, spoil or fade. This inheritance is kept in heaven for you, who through faith are shielded by God’s power until the coming of the salvation that is ready to be revealed in the last time. 1 Peter 1:4-5

Peter talked about new birth, the resurrection and now an inheritance that can never perish, spoil or fade. What’s he talking about? He’s talking about eternity and he’s giving us an incredible perspective that can help us process pain and suffering in our own lives.

Ladies, if you’ve ever given birth, without the drugs, the pains of labor are not fun . . . so I’m told. If you pinpointed that moment in history during the height of labor and I interviewed you and said, “How are you feeling right now? Are you finding joy and happiness? Is everything working out the way you want?” In that moment, that would be the only time you’d ever consider cussing out a preacher. But the pain of labor is part of the process that leads to the greatest blessing of them all: new birth. Peter’s friend Paul would use this analogy in a letter he wrote to the Christians in Rome associating the pain and suffering we face now with the pains of labor:

We know that the whole creation has been groaning as in the pains of childbirth right up to the present time. Not only so, but we ourselves, who have the firstfruits of the Spirit, groan inwardly as we wait eagerly for our adoption to sonship, the redemption of our bodies. For in this hope we were saved. Romans 8:22-24

There it is again: in the midst of pain and suffering, cling to the hope of eternal life. That’s why mothers who have already gone through the pains of labor intentionally get pregnant again, subjecting themselves to the pains of labor: they know the gift that comes at the end, new life, makes it all worth it. That’s the hope that kept Peter going, someone who had personally walked through untold amounts of pain and tragedy. Let’s get back to Peter’s letter:

In all this you greatly rejoice, though now for a little while you may have had to suffer grief in all kinds of trials. 1 Peter 1:6

Here’s the twist: Peter finds every reason to rejoice in God, even though bad things happened to him and those he loved. Instead of questioning God or abandoning the faith, Peter tells Christians to rejoice even in the midst of pain and suffering. And by the way, for them, pain and suffering for him wasn’t “I lost my job” or “my boyfriend broke up with me,” it was “The Roman government threw my husband to the lions in the colosseum because we’re Christians” or “Emperor Nero is killing every Christian in Rome.”

Peter’s faith wasn’t so small that everything in his life had to work out for God to be good. His God wasn’t so small that his version of God existed solely to meet Peter’s needs and make Peter happy, and if anything went wrong Peter started to question God, as if God was Peter’s personal assistant or butler. All Peter needed was the cross and the resurrection and the hope that gave him that one day his pain too would cease.

These have come so that the proven genuineness of your faith—of greater worth than gold, which perishes even though refined by fire—may result in praise, glory and honor when Jesus Christ is revealed. 1 Peter 1:7

Peter knew that bad things happen because we live in a fallen world. Life was hard in the first century. He never had social media and advertisers constantly fill his head with the lie that life was supposed to be easy and you should never have to work for anything or suffer any kind of discomfort whatsoever. He understood that life was hard. But there’s a greater purpose that transcends the pain. That’s how Peter reconciled a good God with pain and suffering in the world.

Though you have not seen him, you love him; and even though you do not see him now, you believe in him and are filled with an inexpressible and glorious joy, 9 for you are receiving the end result of your faith, the salvation of your souls. 1 Peter 1:8-9 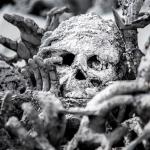 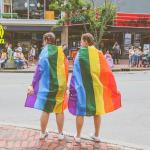 May 6, 2019 The False Dichotomy the World Presents Christians Concerning the LGBTQ Movement
Recent Comments
0 | Leave a Comment
Browse Our Archives
get the latest from
Evangelical
Sign up for our newsletter
POPULAR AT PATHEOS Evangelical
1