The Spirit-Less Death Spiral for Churches

In a previous post I made the argument that the oversimplified reason why so many Southern Baptist churches (and by extension many similar denominations) are dying is because we’ve removed the Holy Spirit from our churches. In this post I’d like to expound on that premise and give a clearer picture of the death spiral that a church falls into when the Holy Spirit is removed:

1. No power to keep the commands given to us. Without the Spirit, we’re giving people a way to live without the power to live it. You don’t have enough power on your own to overcome your sinful nature. You need a power greater than yourself, and that’s the Holy Spirit. That’s why the Jews were so frustrated with the Old Testament Law, because it was a list of rules with no power to actually keep those rules.

2. No victory in Christian living. If you can’t keep the commands of Scripture, then you live in a constant state of defeat. Some of you know exactly what that’s like. No matter how hard you try, you can’t seem to get things right. You’re always defeated. Now Christianity becomes a burden because all it does is show you a goal to reach for that you’ll never reach because you can’t get there on your own. No Holy Spirit means no power to overcome sin, no power to overcome addictions, no power to be continually transformed.

3. Absence of grace inside the church (replaced with pride). When you get enough of these defeated Christians inside a church, it infects the whole. It’s through the power of the Spirit that we show grace and mercy, that we forgive, that we live with the spirit of service and humility. You take the Spirit away, and the church becomes a place filled with pride and self-righteousness and no grace, which breaks the church apart. It’s like an engine that runs out of oil. Without grace, your church will eventually self-destruct.

4. Dissolution of unity. In John 17, we see the only time recorded in Scripture where Jesus prayed for future church, you and me, and what he prayed for was unity. In 1 Corinthians and Ephesians Paul tells the early church that it’s the Holy Spirit that unites us. So when we take the Holy Spirit out of the churches, that’s when dissensions and factions pop up. That’s when there’s power politics in the church, backbiting, slander, gossip, and eventually church splits, exactly the opposite of what Jesus prayed for and what we see in Acts.

6. Less compelling witness of the church. Without the Holy Spirit, what’s the difference between the church and the world? If guests wanted fighting, judgement, hatred and hypocrisy, they could go to work or watch reality television. Why would they get their family up and out of the house, make the drive, subject them to mild torture, and put money in the offering plate so they could endure the same punishment next week? If we’re not different than the world, then what sets us apart? Why would anyone want to join us? It’s the presence of the supernatural, the presence of God’s Spirit in our lives that sets us apart. Without the Holy Spirit, we’re no different than everyone else.

7. Reduces witnessing to mere intellectual arguments. Paul said that when he preached in the first century it wasn’t with wise and persuasive words but with a demonstration of the Spirit’s power. Without the Holy Spirit we’re literally doing the opposite of what Paul did. We’re relying on intellectual arguments, we’re memorizing canned presentations, we’re trying to argue people into the kingdom of heaven rather than demonstrating the undeniable power of God in our lives. And that’s why people are walking away from Christianity. We’re relying on merely intellectual arguments, and Paul already told us 2000 years ago that that doesn’t work. 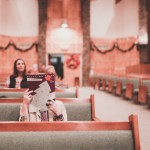 Why One Ancient Megachurch Pastor Would Like You...
Today's post is another guest feature from my wife, Nadya Williams, professor...
view all Evangelical blogs
What Are Your Thoughts?leave a comment
Copyright 2008-2021, Patheos. All rights reserved.