Liturgy and Eucharist – Part XVII (and final) May 6, 2017 Gerald McDermott 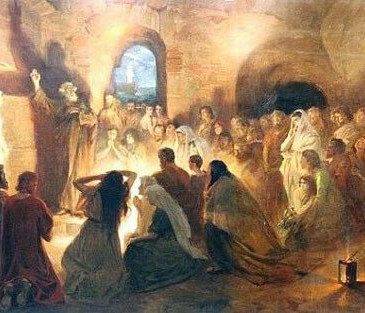 I once had a Ivy League PhD colleague, trained in New Testament, who refused to talk about “early Christianity.”  Instead, for this scholar, there was only a multiplicity of early Christianities.  This colleague seemed to regard talk of early church consensus as naive–ignorant of all the variant views and practices of the first-century followers of Jesus.

This colleague was trained by scholars who refused to speak of early orthodoxy, or if they used the word, it referred to “the winners” who used power to push aside those disagreed.

Of course these scholars had some reason for their approaches.  There was indeed considerable variation in practice and belief, and over time those who established “orthodoxy” became dominant over those judged to be heretical.

Funny thing, though.  These colleagues who disdained talk of consensus or orthodoxy often came to prefer one view of Jesus and argued for its coherence and historical legitimacy.  In other words, they established their own sense of orthodoxy and heresy, though it was usually the flip side of what has come to be regarded as historical orthodoxy by most historical theologians today.

My former colleague reminds me of Bradshaw.  He (Bradshaw) is impatient with those who speak of any liturgical consensus in the first four centuries, and wants to keep reminding us of enormous diversity.  And of course he shows us proof of considerable diversity.  We can indeed learn from him that Dix was wrong on some conclusions he drew.  There was no single line of development, nor was there an original rite that persisted from day one through the next centuries.

Yet Dix was not as naive as some critics have charged.  Dix himself admitted that there were “big gaps in our knowledge” of liturgy all the way up through the third century. He wrote of “remarkable differences” among the “great historic families of liturgies.”  He conceded that his “shape of the liturgy” did not emerge clearly until the later fourth century, even if the basic elements were there most of the time from the very beginning.

But if I were to assign books to students who wanted to learn theology of liturgy and sacrament, I would most definitely include Dix.  For in Dix there is vision of the beauty of holiness.  He writes with passion and a certain lyrical quality.  In this day when so many Christians are wanting to catch a glimpse of the beauty of liturgy and sacrament as billions of Christians have experienced them through the ages, Dix provides it in an unparalleled way for Anglicans.  To my mind, only the Orthodox Schmemann (For the Life of the World) and Catholic Ratzinger (The Spirit of the Liturgy) rival Dix for rhetorical power and vision.

Bradshaw is good for the history of liturgy and sacrament, showing us its many parts and how  some were preferred over others in the fourth century.  But in Dix the Anglican reader finds in unique fashion the compelling meaning of the Eucharist:

Dix charts the history of how the church has lost this eschatological meaning of the Eucharist, where the church as a body enters into the eternal act of worship by the Son of the Father.  He shows how the church, beginning in the fourth century and then especially in the medieval and Reformation periods, turned the Eucharist into an act of individual piety watching what is performed at the front by the priest, which has become a merely mental remembrance of an historical act in the first century.

For both the beauty of his vision–which seems to this reader to capture the vision of the New Testament and the Fathers–and his history of the loss of this vision, Dix is essential for Anglicans.  He can also be a great help to all Christians who seek to understand what modern Christianity has lost in liturgy and sacraments. 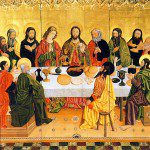 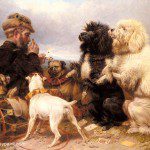 May 13, 2017 What dogs teach us about God - Part 1
Browse Our Archives
get the latest from
The Northampton Seminar
Sign up for our newsletter
POPULAR AT PATHEOS Evangelical
1