Seven things I learned about God from Nigerian Christians

Nigeria is the epicenter of the new Christianity of the Global South.  More Anglicans gather for worship in Nigeria on an average Sunday morning than in all the Episcopal and Anglican churches in North American and Great Britain combined.

At the same time that Christian revival keeps bubbling in Nigeria, Christians in Nigeria are being slaughtered by Muslims on jihad.  Since January 2018 eight thousand Christians—most of them children, women and the elderly (according to the Egyptian scholar Raymond Ibrahim)—have been hacked by machetes or gunned down by AK-47s to the cry of “Allahu Akbar!”

I just returned from an intense nine days teaching in Jos, Nigeria, at the center of this religious cleansing.  Dedicated young Christian leaders and seminarians told me they cannot sleep because the attacks always come in the middle of the night.  Many know believers who have been killed.  Archbishop Benjamin Kwashi’s home was attacked last week, his cows stolen, and his beloved neighbor who tried to protect him was gunned down.  Most think the Archbishop’s attackers were sending a message, “You are on our list.”

The Nigerian Christians I met showed me new things about the Trinitarian God. To be sure, none of them were new intellectually.  But all of them were fleshed out in new ways. 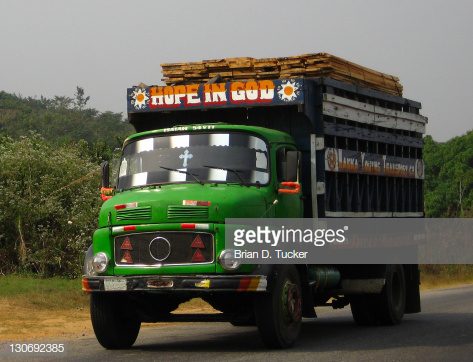 As we passed trucks along the road, I noticed that most had slogans painted across their cabs.  One read, “Do Good.”  Another was “Go Well.”  Still another: “Look, Listen and Learn.”  Cynics might say these represent cheap moralism.  But there is little doubt they come from the conviction that there is a God who cares how we behave.

Finally, last week I was told of young men raised in Christian villages who got fed up with Muslim attacks on their Christian neighbors and started attacking Muslims.  They killed one man, torched two cars, and bloodied several others.  But then they were filled with remorse and turned themselves in to police, who no doubt imprisoned them and perhaps tortured them.  I had no way to confirm this report.  But it suggested at least one thing: that Nigerian Christians believe it is wrong to attack Muslims at large when jihadist Muslims are attacking Christians.

This is another rare but profound way that the gospel changes society.

July 3, 2018
Jos Muslims talk about the violence
Next Post

July 11, 2018 Mission in the midst of persecution: a book review
Browse Our Archives
Follow Us!

Jameela Jamil, Jesus, and Me
Preventing Grace
Related posts from The Northampton Seminar

Jameela Jamil, Jesus, and Me
I haven’t finished watching The Good Place. Every time I sit down...
view all Evangelical blogs
Copyright 2008-2020, Patheos. All rights reserved.