How To Change Grief Into Joy

I only Googled his name on a whim. He was a talented poet, and many years ago I had fallen into a deep connection with him. We had spent precious time together at a poetry retreat and it was like being in another world. I was deeply shocked to see that he had died. He was only 53. I cried at my laptop and then last night the grief pulsed through me again, as if I was being squeezed by a giant hand. I remembered his tenderness towards me, and the way we held hands on the train as I travelled back to my partner of many years. I remembered the wrenching ache of something that could have been, but wasn’t.

I am surprised at the strength of my grief. This man hasn’t been in my life for fifteen years, and after the initial intensity of our encounter had faded, I had hardly given him a thought. I am living a very different life now – happy with a different life partner, grounded by my Buddhist faith and practice, and with a lot of healing under my belt. I don’t regret not leaving my ex-partner to be with the poet. He was brilliant, intense, and troubled, and at the time I had lots of parts that were attracted to his variety of trouble like moths to a flame. I don’t think I would have wanted to be there for his last four years of ill health. What am I grieving? What did I lose?

I am grieving the connection that formed between us so briefly, and so deeply. I remember seeing inside him to his essence, and feeling that I already knew it. I also remember him looking at me, and feeling seen. He ‘got’ me in a way that nobody else in my life did during that time. I remember being the recipient of his small kindnesses, and not quite knowing what to do with them – it was so unusual to be treated with that kind of tenderness, and parts of me felt deeply undeserving. I both wanted more, and felt afraid to be the focus of expressions of such profound cherishing. Could I really be the shining person he saw me to be?

I am grieving the man I knew him to be – with his quirks and jagged edges, with his darkness and his blinding explosions of light. The word that keeps coming to mind is ‘brilliant’ – a cleverness so sharp that it could cut deep and leave scars, a creativity that was not quite of this world. Somehow this included a capacity for gushing, untrammelled love alongside a closed-upness that nobody would ever find a way inside.

I am grieving for myself. For the opportunities I never followed up, and for all the times I said ‘no’. For all the lives I will never lead. If I die at the same age as him, I have five years left. Might I even have less? Who of those around me will be the next to go? I am grieving for the small losses too – my cat who is getting thinner as he ages, the important friendship that has somehow lost its warmth, and the last of the pink dahlias in the temple garden as they brown round the edges and slowly droop into mush.

I don’t think that we need to cultivate or develop mindfulness of death. I think that instead we need to gently allow this awareness in, as death surrounds us at all times. Sometimes we get a bigger dose, as I did when I discovered the disappearance of my friend. Occasionally death punches us so hard, we are knocked onto our backs for a while. Most often, we are offered little drops. We move through a mild illness, and we can be thankful for our health again. We pass a dead rabbit on the road, and we make a small prayer for her. We read news about the climate crisis, and we allow our hearts to sigh.

Right now I am feeling on the edge of tears again. Mixed in with this grief is a great gratitude for the short time I was allowed with my beloved poet. This time will live on inside me, and it will always be a gift. His death is his final offering to me, and I am receiving it in the way I received his previous kindnesses – with some incredulity (do I really deserve it?) and with a taste of sweet, sweet joy.

Are you mindful of death? If you are and it feels too much, allow yourself to step away from it for a while in whatever way is possible. If you are not, allow a little drop to enter you and see how it feels. Be as gentle as you can be at all times.

Buddhist
Is It Time To Leave Your Relationship?
Gentle Buddhism

Buddhist
Should I Go To Prison?
Gentle Buddhism 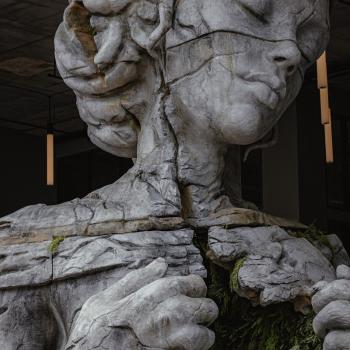 Zen and Recovery: Abstinence is Radical
A while back I was in New York City, a city famous...
view all Buddhist blogs
What Are Your Thoughts?leave a comment