Secular vs. Religious: Making Distinctions as a Witch

It’s common now to assert that witchcraft is a “practice” as opposed to a religion in and of itself. You might hear this in the context of, “Wicca is a religion, but witchcraft is a practice,” or “Witchcraft is a secular craft–some people just combine it with their religions.” Many practitioners identify as “secular witches” or “non-religious witches,” and our communities are adjusting both our perspectives and our vocabularies to better include and understand the growing variety (which is awesome).

These perspective are valid and make a lot of sense to an increasing number of people, but they do assume particular definitions of what it means for things to be “religious” or “secular.” Those definitions, it turns out, aren’t universal, and they’re worth taking time to explore.

In this video I share some perspectives on secularism and religiosity that are common in the academic study of religion. In doing so, I hope that as practitioners (however we identify) we can start to approach these conversations with a little more nuance, as well as increased appreciation for how religion is understood to function in other contexts. Sometimes, when we say “witchcraft is a practice” or “I’m a secular witch,” or “Wicca is the religion, but witchcraft is a craft,” we’re not being as clear as we think we are.

Like my words? Pre-order my book, The Witch’s Path: Advancing Your Craft at Every Level. 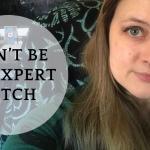 February 21, 2021
Don't Be an Expert Witch: Expertise, Advancement, and Small Ponds
Next Post

June 6, 2021 Cicada Magic
Recent Comments
0 | Leave a Comment
"These are all really interesting to hear, and it is something I ponder as I ..."
Weaver Beginner Books that Don’t Suck
"My great-grandmother was a Mooney, down in Conecuh County, Alabama."
Jennifer Chappell Saying Hello to a New Year
"Hi Gordon, maybe if you try to put your hand and pen above the line ..."
Carolina Norambuena A Witch’s Guide to Fountain Pens
"You touch on it a bit, but how similar, in your experience, are pagans when ..."
Chris Mann Talking to Gods
Browse Our Archives
Related posts from Oathbound