World-renowned fine artist, and special guest in Episode 6 of For the Life of the World, Makoto Fujimura recently came to Grand Rapids to promote his latest work “Walking on Water – Azurite” for the nationally-recognized art competition ArtPrize.

An elegy to the 2011 Tsunami that obliterated the coasts of Japan’s northern islands, “Walking on Water” seizes the essence of destruction, chaos, and crushing violence that the earth carries at its core. He reminds us that in simple pivots, the earth can drown out entire nations. “Walking on Water” is a reflection of the horrible truth that the world is a broken place, that we live in exile. What’s more, “Walking on Water” is a response to exile. And yet, there is beauty, truth, and goodness. Hope coexists with pain. The more I think about it, it is a glistening example of justice and the Economy of Order.

In “Walking on Water,” Makoto enters into the unfathomable calamity. He stares into the dreadful reality that over 15,000 people were choked out by an ocean’s fury. He gives voice to the more than 45,000 homes and businesses, the hundreds of thousands of livelihoods, that were swept away. He gifts us with the memory of the immense humanity thatwas sucked into a dark abyss, never to return. In this piece, Makoto renders all that’s wrong with world. He lays it bear on a canvas, in deep and shimmering color and joins us in their suffering, if we let it. (Photographs do this piece no justice. You must see the layers upon layers of azurite prisms reflecting light.),

“Walking on Water” confronts us with the reality of justice. A just world that Mako writes “ought to be” begins in experiencing the inescapable reality of what “is.” This awareness doesn’t leave us hopeless. It doesn’t abandon us in despair to tread water in an apathetic ocean. Makoto reminds us through his title, “Walking on Water,” of the story from Matthew 14, where Jesus and Peter walk on water. We are reminded that when we enter into injustice, with our eyes fixed on Jesus – we will mourn, yes – but we will also do the impossible. We will rise above the waves. We trample the tumult of death, and reveal the impossible life of “what ought to be.” We will walk on water.

I see this same justice reveal itself in the life and work of John M. Perkins (special guest from Episode 4), a man all too familiar with injustice and the wages of sin. He experienced firsthand the horrors of racism and inequality in the South. White landowners and business men exploited him and his community at every turn. His brother was gunned down by white police officers. Perkins himself was beaten nearly to death and thrown in jail.

Still, he refused to turn away from the injustice. He refused to grow bitter and sink into despair. He refused to run away from the dark reality of the South. He chose to be, and to bring, the “oughtness” of Jesus. You can see it in the very first principle Perkins developed for the Christian Community Development Association (CCDA): Relocation.

Just as “Walking on Water” asks us to enter into the suffering of the tsunami victims, John Perkins reminds us that seeking justice requires us to move into the communities and thereby into the lives those experiencing injustice. According to his philosophy, “By relocating, a person will understand most clearly the real problems…and then he or she may begin to look for real solutions…Relocation transforms ‘you, them, and theirs’ to ‘we, us, and ours.’” Perkins sites John 1:14, “The Word became flesh and dwelt among us, and we beheld His glory as of the only begotten from the Father, full of grace and truth.”

In this world of exile, for justice to prevail there can be no “us” and “them.” There can only be “us.” The ideas of Martin Luther King, Jr. come to mind: we are a brotherhood, all part of one family, and we are all connected. What is unjust for one, is unjust for all.

As I unpack what the Economy of Order is and how we bring justice – Shalom – to a fallen world, I know I don’t have it all figured out. I’m not even scratching the surface. Yet, from all that I’ve seen and heard, I can’t deny that it starts with a person. It’s Jesus, God with us, who pours out in Makoto and his canvas and John Perkins into his community. It’s all of us taking the time to know our neighbors. Justice starts with us, stepping out in faith, relocating into the cold and uncaring waters of life that will certainly swallow us up, but for our faith in the impossible grace of God.

[Originally published at the FLOW Blog] 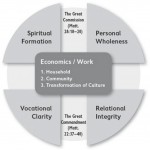 October 7, 2014
The 'Transformational Quartet' of Christian Stewardship
Next Post 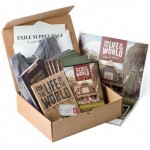