Pornography is Everywhere, so Why Can’t We Talk About the Addiction?

Pornography is Everywhere, so Why Can’t We Talk About the Addiction? February 21, 2020 Brian Fraga

I recently wrote a collection of personal vignettes from people I interviewed who described how regular Eucharistic Adoration had changed their lives. Some described receiving consolations, having their faith renewed or strengthened, and being aided in their struggles with mental health.

One person I spoke with let his guard down a little and shared how his weekly Holy Hours before the Blessed Sacrament had helped him to overcome an addiction to pornography several years earlier. I thought nothing more of it until a couple of weeks later when speaking with the man’s spouse, a friend, who told me that a relative had scolded her husband for revealing his struggle.

“It’s a silent epidemic. No one talks about it,” my friend told me. “But it’s destroying marriages.”

Even people – men and women – who try to practice and live out the Catholic faith find themselves confessing that same sin, time and time again. Referencing Jesus’ instructions to his disciples in Mark 9:29, a priest friend of mine once said that pornography is the kind of sin that can only be cast out “by prayer and fasting.”

This all reminds me of the stigma that for years made recovery more difficult for people who struggled with heroin and opioid addiction. I saw this happen firsthand from the perspective of a local newspaper reporter who covered a community in Southeastern Massachusetts that was particularly hard-hit by the opioid crisis.

Instead of seeing addiction for what it was – a biochemical disease that leaves one virtually powerless over the drug – we as a society for too long dismissed heroin addicts as “junkies.” When someone they loved fell into addiction or died from an overdose, too many families didn’t want to talk about it, because of the shame. All that did was isolate people from life-saving support and recovery networks.

For what it’s worthy, my above-mentioned friend is proud of her husband’s witness. She said to me, “He told (his critical relative), if even one person’s heart is touched, it’s worth it.”

May we all have such authenticity. And courage. 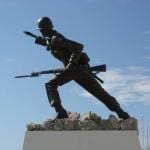 March 25, 2020 Coronavirus Is Serious, So Stop Messing Around
Recent Comments
0 | Leave a Comment
Browse Our Archives
get the latest from
On the Catholic Beat
Sign up for our newsletter
POPULAR AT PATHEOS Catholic
1