A Former Court Reporter’s Take On The Cardinal Pell Case

I am not an agnostic when it comes to religion, but I am if we’re talking about something like whether Lizzie Borden really murdered her father and stepmother in 1892.

You’ll find passionate people with opposing beliefs regarding that sensationalist 19th century murder mystery, which has spawned a host of movies, books, a television series and true crime specials. As for me, I have no strong opinions either way. Quite frankly, I don’t think we’ll ever know for sure if Lizzie was framed or took an ax to her parents.

That’s kind of how I feel with the case of Cardinal George Pell, the Australian cleric whose 2018 conviction on child sexual assault charges was quashed this week by Australia’s top court. In its ruling, the court said the prosecution’s case against the former archbishop of Melbourne/Vatican official had too much reasonable doubt to sustain the conviction.

The seven-judge panel said the jury ignored “compounding probabilities” caused by contradictory accounts between the cardinal’s main accuser, a former altar boy, and as many as 20 other witnesses who raised doubts as to whether the alleged sexual assaults of two choirboys could have actually happened in the sacristy in 1996, following Sunday Mass in Melbourne’s St. Patrick’s Cathedral.

Those witnesses and the cardinal’s attorneys argued that Cardinal Pell’s routine after Mass, the layers of liturgical robes he wore, the amount of foot traffic around the sacristy, and the relatively narrow time window – about six minutes – when the assaults could have happened all made it extremely unlikely that he committed the crimes. They also note that one of the alleged victims – who subsequently committed suicide – told his mother that the cardinal never abused him.

All that is indeed possible, and raise legitimate doubts that any good defense lawyer could wield with great effect to punch boulder-sized holes in the prosecution’s case. But there is a problem. We have to take the Australian high court’s word for it that there was too much reasonable doubt because the central evidence in the case has never been released to the public.

The main accuser’s testimony, on which the judges said the prosecution’s case “was wholly dependent,” has still not been shown to the media or the general public. We have no video, audio recordings or courtroom transcripts of what the complainant said that could give us a full detailed picture of what exactly was alleged, and that could help us come to our own conclusions about his credibility.

As a longtime former police and court reporter who covered several trials over the years, including the first Aaron Hernandez murder trial in 2015, I can tell you firsthand that a complainant’s credibility is critical in any case that hinges on their word against the defendant’s.

We have court filings and charging documents that tell us about the alleged fact pattern in the Pell matter. But to date, the only people who have heard directly from the complainant are the attorneys, the two juries in the original trials – one deadlocked and the other unanimously convicted the cardinal – the trial judges, three Australian appellate justices, two of whom voted to uphold the conviction, and now the high court, which unanimously decided there was a strong chance that an innocent man had been convicted.

We should all be glad that prosecutors have to PROVE their case beyond a reasonable doubt – a necessarily high standard – in order to get someone convicted. But the conflicting conclusions that we have here about the complainant’s credibility and the veracity of his allegations make it difficult, in my opinion, for us in the public to fully assess the original guilty verdict and the high court’s final ruling without being privy to what he actually said.

If anything, this case was shrouded in opacity from beginning to end. The Australian courts severely restricted the journalists who tried to cover the story. The courts had veto power as to what could be reported, and even ordered that some news stories be deleted after they were already published online.

Lest we forget, Cardinal Pell was convicted in December 2018, but media outlets were not allowed to report that newsworthy development until TWO MONTHS LATER after prosecutors dropped a second trial that would have featured additional accusations against the cardinal.

Also, Cardinal Pell isn’t exactly “out of the woods,” so to speak. A Vatican trial may no longer happen, but the cardinal still likely faces a year or more of related civil claims. And now that his criminal case has been adjudicated, Australia’s Royal Commission Inquiry into Institutional Child Sex Abuse is expected to publish the segment of its report that relates to Cardinal Pell. The reporting I’ve read indicates that observers expect it to be highly critical of the cardinal and how he handled child sex abuse cases.

And in case you didn’t know, additional accusations against Cardinal Pell have circulated for years. Some of those allegations were the subject of “Cardinal: The Rise and Fall of George Pell,” a book written by the journalist Louise Milligan.

The attorney for the complainant in the above-mentioned case has furthermore been reported as saying that there are several other people who have recently accused Cardinal Pell of abuse. Two of them – both men – appeared recently in a documentary on Australian television to say the cardinal abused them as boys in the 1970s.

The View From Victims

There is a lot we don’t know here, although there are people – both friends and critics of the cardinal – who made reasonable arguments that the prosecution’s case was thin, had no corroborating evidence and should never have been brought against him. Some suggest the authorities sought to railroad Cardinal Pell against a backdrop of an anti-Catholic Australian legal system and ambient culture that were out for blood in the wake of that country’s horrific clergy sex abuse scandals.

The confidence of many in the cardinal’s innocence was reflected in the jubilant responses I saw this week on Twitter from some Catholic journalists, pundits, priests, bishops, canon lawyers and others. I looked on that with a bit of a raised eyebrow, not because I have anything against Cardinal Pell. My concern was more rooted in what that reaction would look like to victims of clergy sex abuse.

“Today is a difficult day for survivors from across the board of sexual violence and gendered crime,” Rachael Burgin, a lecturer at Swinburne Law School and co-director of Rape and Sexual Assault Research and Advocacy Initiative, told Al Jazeera.

Advocates for sex abuse victims immediately took to Twitter to express solidarity with them.

<blockquote class=”twitter-tweet”><p lang=”en” dir=”ltr”>We believe you, we stand beside you and your courage will not be forgotten. Today we sit with you in this despair, and tomorrow we will all continue to fight against a broken system that allows for these things to happen, a system that lets survivors down.</p>&mdash; Rape and Sexual Assault Research and Advocacy (@RapeReform) <a href=”https://twitter.com/RapeReform/status/1247320166519541760?ref_src=twsrc%5Etfw”>April 7, 2020</a></blockquote> <script async src=”https://platform.twitter.com/widgets.js” charset=”utf-8″></script>

Our hearts ache for the surviving accuser in this case, and we hope that this disappointing ruling does not deter other victims from coming forward to report their abuse. https://t.co/kb1oHDriBF

<blockquote class=”twitter-tweet”><p lang=”en” dir=”ltr”>It does not matter how credible or honest you are. It does not matter if you are believed by a jury of your peers. Your years of pain mean nothing in the eyes of the law, because you cannot prove your pain to the required standard, no matter what.</p>&mdash; Finley Tobin (@finley_tobin) <a href=”https://twitter.com/finley_tobin/status/1247666838185504769?ref_src=twsrc%5Etfw”>April 7, 2020</a></blockquote> <script async src=”https://platform.twitter.com/widgets.js” charset=”utf-8″></script>

The complainant in the above-mentioned case also released a statement through his lawyers to say he respected the high court’s decision, and that he understood that “no-one wants to live in a society where people can be imprisoned without due and proper process,” which he called a basic civil liberty.”

“But the price we pay for weighing the system in favour of the accused is that many sexual offences against children go unpunished,” the complainant also said, adding that he hopes the outcome will not discourage anyone from reporting child sexual abuse to the police. 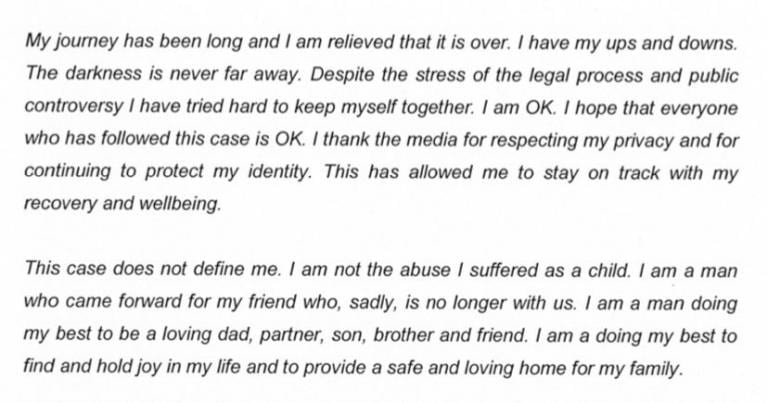 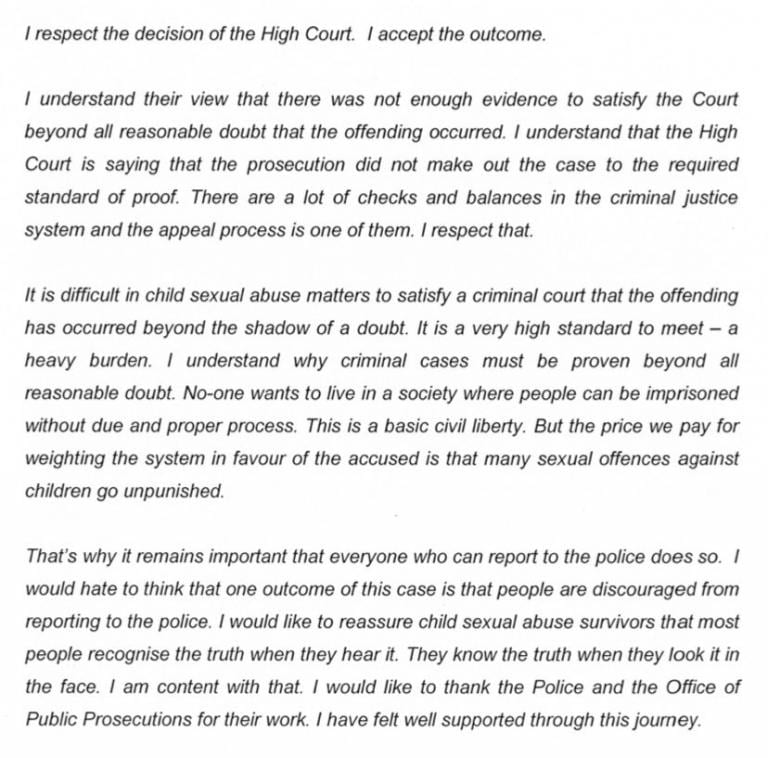 To his credit, Cardinal Pell released a measured statement where he said that he bore no ill will for his accuser, and that he did not want his acquittal to add to the “hurt and bitterness” that many already feel. 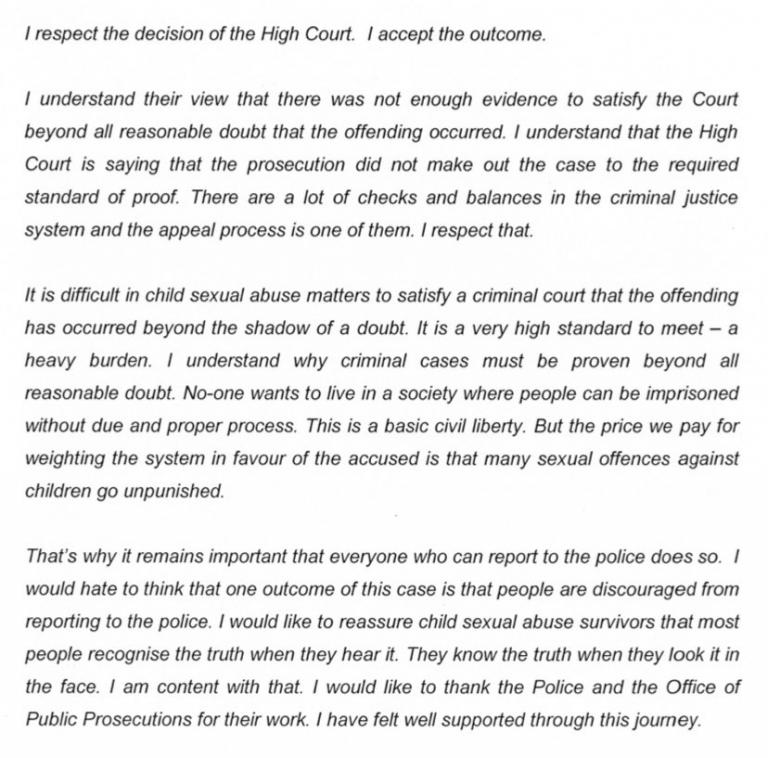 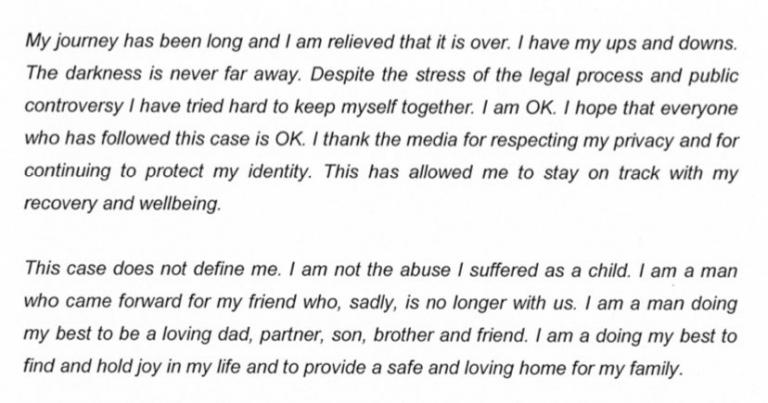 In the end, I think we can all take solace that the cardinal received the due process that he had a right to in the Australian legal system, and that the alleged victim was heard and had his complaints taken seriously. I think that’s all we can definitively say. Because when it comes down to it, that’s all we really know.

April 3, 2020
No, God Did Not Send Coronavirus To Punish Us For Sin.
Next Post

May 26, 2020 After "AKA Jane Roe," An Examination of Conscience Is In Order
Recent Comments
0 | Leave a Comment
Browse Our Archives
Follow Us!

Go Ahead. Take Down Statues of...
Public Catholic
Related posts from On the Catholic Beat 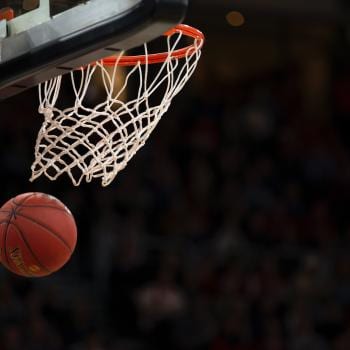 Catholic
"That Was God disguised as Michael Jordan." A...
On the Catholic Beat

Catholic
Extra Quotes from My Interview with EWTN Radio's...
On the Catholic Beat 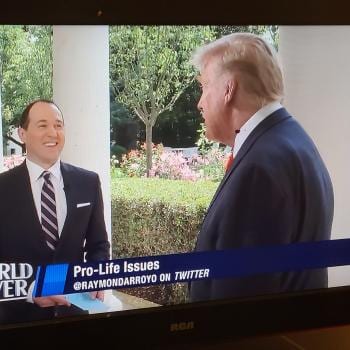