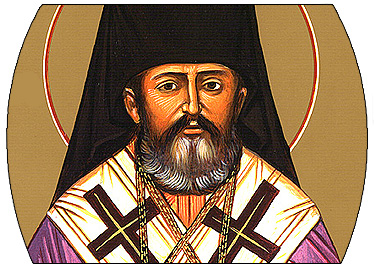 To My Beloved Clergy and Laity of the Syrian Greek-Orthodox Catholic Church in North America:

Greetings in Christ Jesus, Our Incarnate Lord and God.

Two years ago, while I was a Vice-President and member of the Anglican and Eastern Orthodox Churches Union, being moved with compassion for my children in the Holy Orthodox faith “once and for all delivered to the Saints” (St Jude ver. 3), scattered throughout the whole of North America and deprived of the ministrations of the Church; and especially in places far removed from Orthodox centres; and being equally moved with a feeling that the Protestant Episcopal (Anglican) Church possessed largely the Orthodox faith, as many prominent clergy professed the same to me before I studied deeply their doctrinal authorities and their liturgy — the “Book of Common Prayer” — I wrote a letter as the Bishop and Head of the Syrian Catholic Mission in North America, giving permission, in which I said that in extreme cases, where no Orthodox priest could be called upon at short notice, the ministrations of the Portestant Episcopal (Anglican) clergy might be kindly asked. However, I was most explicit in defining when and how the ministrations should be accepted, and also what exceptions should be made. In writing that letter I hoped, on the one hand, to help my people spiritually, and, on the other hand, to open the way toward bringing the Anglicans into the communion of the Holy Orthodox faith.

On hearing and in reading that my letter, perhaps unitnentionally, was misconstrued by some of the Episcopalian (Anglican) Clergy, I wrote a second letter in which I pointed out that my instructions and exceptions had been either overlooked or ignored by many, to wit:

(a) They (the Episcopalians) informed the Orthodox people that I recognized the Anglican Communion (Protestant Episcopal Church) as being united with the Holy Orthodox Church and their ministry, that is holy orders, as valid.

(b) The Episcopal (Anglican) Clergy offered their ministrations even when my Orthodox clergy were residing in the same towns and parishes, as pastors. And,

(c) Protestant Episcopal clergy said there was no need of Orthodox people seeking the ministrations of their own Orthodox priests, for their (the Anglican) ministrations were all that were necessary.

I, therefore, felt bound by all the circumstances to make a thorough study of the Anglican Church’s faith and orders as well as of her discipline and ritual. After serious consideration I realized that is was my honest duty, as a member of the College of Bishops of the Holy Orthodox Greek Apostolic Church, and Head of the Syrian Mission in North America, to resign from the vice-presidency of and membership in the Anglican and Eastern Orthodox Churches Union. At the same time, I set forth, in my letter of resignation, my reason for so doing.

I am convinced that the doctrinal teaching and practices as well as the discipline of the whole Anglican Church are unacceptable to the Holy Orthodox Church. I make this apology for the Anglicans whom as Christian gentlemen I greatly revere, that the loose teaching of a great many of the prominent Anglican theologians are so hazy in their definition of truths, and so inclined toward pet heresies that it is hard to tell what they believe. The Anglican Church as a whole has not spoken authoritatively on her doctrine. Her Catholic minded members can call out her doctrines from many views, but so nebulistic is her pathway in the doctrinal world that those who would extend a hand of both Christian and ecclesiastical fellowship dare not, without distrust, grasp the hand of her theologians, for while many are orthodox on some points, they are quite heterodox on others. I speak, of course, from the Holy Orthodox Eastern Catholic point of view. The Holy Orthodox Church has never perceptibly changed from Apostolic times, and, therefore, no one can go astray in finding out what she teaches. Like her Lord and Master, though at times surrounded with human malaria — which He in mercy pardons — she is “the same yesterday, and today, and forever” (Hebrews 8:8) … the mother and safe deposit of “the truth as it is in Jesus” (Eph.4:21).

[Here St Raphael details differences between Orthodoxy and Anglicanism with regard to the number, substance, and ministration of the Sacraments.]

I do not deem it necessary to mention all the striking differences between the Holy Orthodox Church and the Anglican Communion in reference to the authority of holy tradition, the number of the General Councils, etc. Sufficient has already been said and pointed out to show that the Anglican Communion differs but little from all other Protestant bodies, and, therefore, there cannot be any intercommunion until she returns to the ancient holy Orthodox Faith and practices, and rejects Protestant omissions and commissions.

Therefore, as the official head of the Syrian Holy Orthodox Catholic Apostolic Church in North America and as one who must “give an account” (Hebrews 13:17) before the judgment throne of the “Shepherd and Bishop of Souls” (1 Peter 2:25), that I have fed the “flock of God” (1 Peter 5:2), as I have been commissioned by the Holy Orthodox Church, and inasmuch as the Anglican Communion (Protestant Episcopal Church of the United States) does not differ in things vital to the well being of the Holy Orthodox Church from some of the most arrant Protestant sects, I direct all Orthodox people residing in any community not to seek or to accept the ministrations of the Sacraments and rites from an clergy excepting those of the Holy Orthodox Catholic and Apostolic Church, for the Apostolic command, that the Orthodox should not commune in ecclesiastical matters with those who are not of “the same household of Faith” (Galatians 6:10), is clear: “Any Bishop; or presbyter or deacon who will pray with heretics, let him be anathematiezed; and if he allows them as clergymen to perform any service, let him be deposed” (Apostolic Canon 45). “Any bishop, or presbyter, who accepts baptism or the Holy Sacrifice from heretics, we order such to be deposed, for ‘what concord hath Christ with Belial, or what part hath he that believeth with an infidel?'” (Apostolic Canon 46).

As to members of the Holy Orthodox Church living in districts beyond the reach of Orthodox Catholic clergy, I direct that the ancient custom of our Holy Church be observed, namely, in cases of extreme necessity, that is, danger of death, children may be baptized by some pious Orthodox layman, or even by the parent of the child, by immersion three times in the names of the (persons of the) Blessed Trinity, and in case of death such baptism is valid: — but, if the child should live, it must be brought to an Orthodox priest for the Sacrament of Chrismation.

In the case of the death of an Orthodox person where no priest of the Holy Orthodox Church can be had, a pious layman may read over the corpse, for the comfort of the relatives and the instruction of the persons present, Psalm 91 and Psalm 118, and add thereto the Trisagion (“Holy God, Holy Strong One,” etc). But be it noted that so soon as possible the relative must notify some Orthodox bishop or priest and request him to say the Liturgy and Requiem for the repose of the soul of the departed in his Cathedral or parish Church.

As to Holy Matrimony, if there be any parties united in wedlock outside the pale of the holy Orthodox Church because of the remoteness of Orthodox centers from their home, I direct that as soon as possible they either invite an Orthodox priest or go to where he resides and receive from his hands the holy Sacrament of Matrimony; otherwise they will be considered excommunicated until they submit unto the Orthodox Church’s rule.

I further direct that Orthodox Christians should not make it a practice to attend the services of other religious bodies, so that there be no confusion as to the teaching or doctrines. Instead, I order that the head of each household, or a member, may read the special prayers which can be found in the hours of the Holy Orthodox Service Book, and such other devotional books as have been set forth by the authority of the Holy Orthodox Church.

Commending our clergy and laity unto the safe-keeping of Jesus Christ, and praying that the Holy Spirit may keep us all in the truth and extend the Borders of the Holy Orthodox Faith, I remain.

Your affectionate Servant in Christ,

May 25, 2006 When Facing East Looks West
Recent Comments
0 | Leave a Comment
Browse Our Archives
get the latest from
Eastern Orthodox
Sign up for our newsletter
Related posts from Orthodixie

Joe Biden and the 11 Traits of Character
Let’s put political parties and issues aside for a moment and look...
view all Eastern Orthodox blogs
What Are Your Thoughts?leave a comment
Copyright 2008-2020, Patheos. All rights reserved.