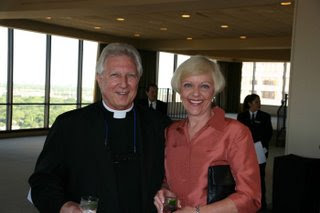 With a surname like Petranek, you don’t immediately think Anglican. But if people can look Anglican, Richard Petranek used to. Maybe that’s because the first time I met him he was in the clerical dress of an Episcopal priest. These days he comes to church dressed in a suit and tie. Since renouncing his orders in the Episcopal Church, especially now that he is enrolled as an Orthodox catechumen, I’d have to say he looks merely distinguished. Soon, God willing, he’ll once again be dressed as a priest – only this time he’ll be Orthodox. Doesn’t “Petranek” sound Orthodox? He will serve as the founding priest of Houston’s new Western Rite Orthodox mission.

I sat down with Richard Petranek recently and the following interview is presented in hopes of introducing him and his vision to those in the Houston area and beyond. Petranek, who served as a priest in PECUSA for nearly 33 years, is well aware that the Western Rite might not be everyone’s cup of tea. But, what I came away with more than anything else is that Richard Petranek is a pastor. He cares about people, the flock. He believes he is on a journey through Faith, within the True Church, to Christ and His Kingdom.

When did you first encounter Orthodoxy?

“I began reading about Orthodoxy in seminary. In 1974, Fr Alexander Schmemann had an article in TIME magazine. It caught my attention and I wrote to him. What impressed me most was … humility. This great man, who did not know me at all, wrote back. Not only that, but it was a hand-written letter! I’ve been searching for that old correspondence recently – but, I remember it dealt with ‘realizing Theology by Communion’.”

Why did it take you so long to come home to Orthodoxy?

“Politics. I’ll be honest, I got into the politics of the church. It was only later – much later – that I came to the realization that I was so involved in politics that I’d lost my soul.”

I’m sure there are some that would name their favorite ecclesiastical “ill” and say, “Dick, why on earth did it take you so long?”

“For me, the issue was order. In almost 35 years I’d witnessed a complete turn-around in the established order of the church. The role of the Bishop had changed from Chief Pastor to Chief Administrator. This, I believed, was a tragedy because, historically, Anglicanism was orthodox. Yet, in the US, the church seems to have lost its roots. I was but a few years away from retirement. But, in the end, I asked my wife: ‘What are we fighting for? We don’t believe this way.’”

When did you begin this journey? Where are you now?

“I’d been meeting, off and on, with Fr John Salem for the past five years. A few months ago I renounced my Orders in the Episcopal Church. Since that time, my wife, Elaine, and I have been on an incredible journey! We’ve traveled to several Western Rite parishes and worshiped regularly with the Houston Antiochian parishes, St George & St Joseph. We have about 40 souls making the journey with us. Elaine and I, along with many others, were enrolled as Catechumens at St Joseph’s earlier this month.”

How does your wife feel about all this?

“She loves it! Our first meeting with Bishop BASIL was so refreshing for her. It was such a change to talk solely about spiritual health as opposed to social issues. The bishop was concerned about her soul! She’s loving it. I say all this with the understanding that by leaving PECUSA I’ve forfeited many benefits; we’ve sold our home, our car, our boat … And we are in a better place, spiritually, than we’ve ever been.”

Why the Western Rite?

“My culture. I’d served as a priest for so long … it makes sense to me. It makes sense to my people. To my mind, the purpose of the Western Rite is to reach out to those who are familiar with Western practice – seeking the True Faith of the Apostolic Church as found in Orthodoxy.”

What sort of folks do you believe are attracted to the Western Rite mission?

“Those who appreciate the historicity of the Church – who know the struggles of the early Church and how She was reconciled when there were differences. I mean, there’s nothing new under the sun. All the problems we see plaguing various Christian groups today have been around from the beginning.”

What version of the Western Rite will you be using? Music, etc?

“We will use the St Tikhon’s Liturgy and that of St Gregory, along with the St Ambrose Hymnal.”

Is it true that key figures in the Orthodox Church, past and present, are opposed to the Western Rite?

How do proponents of the Western Rite respond?

“My Bishop, my Metropolitan, and my Patriarch support it – that’s good enough for me. Antioch was always the center of missionary outreach. The Western Rite is part of the missionary outreach of Orthodoxy. It was in Antioch that St Paul began his three missionary journeys. He didn’t let cultural differences change the essence of the Faith. We see our mission in the same light.”

Someone posed the question: “If ten years from now – for any reason or no reason – the Western Rite was abolished or folded into the Eastern Rite, where do you think that would leave your parish and long-term faithful?”

“They’d go to the Eastern Rite. I can’t see myself convincing someone to be Western Rite as opposed to Eastern Rite. The theology is the same, the expression is different. I also can’t tell you how freeing it is to be under a bishop who is concerned for the salvation of souls. The person is extremely important in Orthodoxy – that’s where the emphasis is … not primarily in getting bogged down in social issues, agendas, and debates. I know what my bishop believes. It’s what I believe!”

When is your first worship service as the Western Rite Orthodox mission in Houston?

After you all are received into the Church, what will be your worship schedule?

I also hope to institute a mid-week Liturgy as well.

Finally, where will you be meeting?

“Beginning Sunday, June 4th, we’ll be meeting at:
11749 Memorial Drive next to Ninfa’s Restaurant
(between Dairy Ashford and Eldrige).”

The worship of Western Rite Orthodox parishes may look and sound a whole lot different than the more common Eastern Rite of the Church. At first glance, it may even resemble Anglican worship. Then again, one could ask: What does Orthodoxy look like? What does it sound like?

May 24, 2006
Pastoral Letter of St Raphael on PECUSA
Next Post

May 27, 2006 The Number of the Beast!
Recent Comments
0 | Leave a Comment
Browse Our Archives
get the latest from
Eastern Orthodox
Sign up for our newsletter
Related posts from Orthodixie

Not Great But True
I began as all young artists do—working toward some imagined greatness that...
view all Eastern Orthodox blogs
What Are Your Thoughts?leave a comment
Copyright 2008-2020, Patheos. All rights reserved.