First Ecumenical Podcast & One to Come … 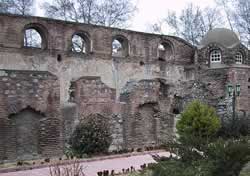 Ruins of the Church of the Holy Wisdom in Nicaea (modern Iznik),
site of the First Oecumenical Council in A.D. 325.

This week’s Orthodoxy Podcast is a sermon delivered at St George – Houston on the Sunday of the Fathers of the First Ecumenical Council (Bagpipes & Liturgical Dance, Next Sunday). What follows, below, is information on an upcoming Bishop’s gathering that warrants our prayers …

NEW YORK – More than 50 hierarchs will take part in the first Assembly of Canonical Orthodox Bishops in North and Central America, to be convened by His Eminence Archbishop Demetrios of America in New York City, May 26-28.

This Assembly is the result of the decision of the Fourth Pre-Conciliar Pan-Orthodox Conference, which met in Chambésy Switzerland in June of 2009, after the extraordinary Synaxis of all the Heads of the Autocephalous Churches convened by His All Holiness Ecumenical Patriarch Bartholomew. This Assembly, one of twelve that will be convened around the world in regions where there is no single Orthodox presence, will consist of the active canonical bishops who reside in the region designated as North and Central America. In every Assembly, the chairman will be the senior bishop of the Ecumenical Patriarchate. 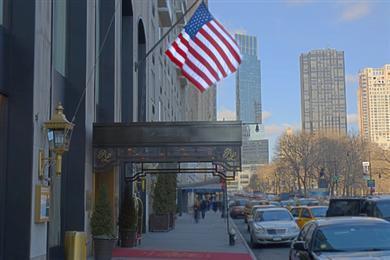 The Assembly will convene at the Helmsley Park Lane Hotel, where accommodations and arrangements have been coordinated by the staff of the Archbishop. The Greek Orthodox Archdiocese, through the Leadership 100 grant to the Office of Inter-Orthodox, Ecumenical and Interfaith Relations, is underwriting much of the expense, with other funds coming from a variety of Pan-Orthodox sources.

In discussing the Assembly at the May 7 meeting of the Archdiocesan Council in Atlanta, Archbishop Demetrios explained that the nature of the assembly is as “a temporary, not a permanent institution. It is simply preparatory to facilitate the process of an ecumenical council (in the future) that will decide the final form of the existence of the Church in a particular country.” His Eminence further explained …

Read it all HERE.

Here is the wording of the so-called Chambésy Agreement …

The Orthodox Center of the Ecumenical Patriarchate

This Conference, to which all of the most holy Orthodox Autocephalous Churches were invited and were represented, studied the issue of the canonical organization of the Orthodox Diaspora. Pursuant to article 16 of the Rules of Pre-Conciliar Pan-Orthodox Conferences, this Conference discussed the relevant documents submitted in 1990 and 1993 by the Inter-Orthodox Preparatory Commission, amending and approving them as follows:

b) Likewise, it is affirmed that during the present phase it is not possible, for historical and pastoral reasons, for an immediate transition to the strictly canonical order of the Church on this issue, that is, the existence of only one bishop in the same place. For this reason, the Conference came to the decision to propose the creation of a temporary situation that will prepare the ground for a strictly canonical solution of the problem, based on the principles and guidelines set out below. Of necessity, this preparation will not extend beyond the convening of the future Great and Holy Council of the Orthodox Church, so that it (the Council) can proceed with a canonical solution of the problem.

2. a) This Conference proposes that, for the transitional period where the canonical solution of the issue will be prepared, “Episcopal Assemblies” of all canonically recognized bishops in each region should be created (or founded) in each of the regions defined below. The bishops will continue to be subject to the same canonical jurisdictions to which they are subject today.

b) These Assemblies will consist of all the bishops in each region who are in canonical communion with all of the most holy Orthodox Churches, and will be chaired by the first among the prelates of the Church of Constantinople and, in the absence of thereof, in accordance with the order of the Diptychs. These Assemblies will have an Executive Committee composed of the first hierarchs of the different jurisdictions that exist in the region.

c) The work and the responsibility of these Episcopal Assemblies will be the concern for manifesting the unity of Orthodoxy, the development of common action of all the Orthodox of each region to address the pastoral needs of Orthodox living in the region, a common representation of all Orthodox vis-à-vis other faiths and the wider society in the region, the cultivation of theological scholarship and ecclesiastical education, etc. Decisions on these subjects will be taken by consensus of the Churches who are represented in the particular Assembly.

3. The regions in which Episcopal Assemblies will be created in a first stage are defined as follows:

i. North America and Central America.

The Bishops of the Diaspora, living in the Diaspora and possessing parishes in multiple regions, will be members of the Episcopal Assemblies of those regions.

4. These Assemblies, which are formed by the decision of this present Conference, have the responsibility to complete the regulation of their operation in the specifications approved by this Conference, and to apply this regulation as soon as possible, and certainly before the convening of the Great and Holy Council.

5. The Episcopal Assemblies do not deprive the Member Bishops of their administrative competencies and canonical character, nor do they restrict their rights in the Diaspora. The Episcopal Assemblies aim to form a common position of the Orthodox Church on various issues. In no way does this prevent Members Bishops from remaining responsible to their own Churches, and to express the views of their own Churches to the outside world.

6. The chairmen of the Episcopal Assemblies convene and preside at all joint meetings of the Bishops of their region (liturgical, pastoral, administrative, etc.). As for matters of a more general concern that require, by the decision of the Assembly of Bishops, a Pan-Orthodox approach, the Assembly’s chairman refers it to the Ecumenical Patriarch for further Pan-Orthodox actions.

7. The Orthodox churches are bound not to advance actions that could hinder the above process for a canonical resolution of the issue of the Diaspora, and to do their utmost to facilitate the work of the Episcopal Assemblies and the restoration of normal canonical order in the Diaspora.

† John of Pergamon, Chairman, † Sergios of Good Hope, † John in Western and Central Europe, † Hesychios of Capitolia, † Hilarion of Volokolamsk, † Irenaeus of Batschka, † Irenaeus of Oltenia, † Neophytos of Roussis, † Gerasimos of Zoukdidi and Tsaisi, † George of Paphos, † Chrysostom of Peristerion, † George of Siemiatise, † John of Korytsa, † Tikhon of Komarno , † Jeremias of Switzerland, Secretary

Icon of the Fathers of the First Ecumenical Council – SOURCE.

May 19, 2010 SYRIA: Monastery of the Dormition
Recent Comments
0 | Leave a Comment
Browse Our Archives
get the latest from
Eastern Orthodox
Sign up for our newsletter
Related posts from Orthodixie

Did Donald Trump Break the #1 Rule of...
To put it mildly, Donald Trump has engaged in some questionable pandemic-related...
view all Eastern Orthodox blogs
What Are Your Thoughts?leave a comment
Copyright 2008-2020, Patheos. All rights reserved.