An Orthodox understanding of Eucharist and Church

In his classic bestseller The Orthodox Church, noted Metropolitan Kallistos Ware shares the following insight into the close connection between Eucharist and ecclesiology:

Essentially, Ware is stating from an Eastern Orthodox perspective what then-Cardinal Joseph Ratzinger and Cardinal Avery Dulles have often stated from the Catholic perspective. First, within the Eucharist, sacrament and ecclesiology are closely connected. Second, there is a vertical dimension to eucharistic communion through which the Christian believer unites oneself to Christ, and through Christ, a horizontal dimension through which Christian believers unite themselves to each other.

This should hardly be surprising to sincere Christians. Both vertical and horizontal are required to make the sign of the cross.

Yet Ware goes even further in his explanation of Eucharistic ecclesiology. As one reads in the following passage, Ware states that the Eucharist creates unity among Christians within the Church:

Space does not permit me to analyze Ware’s quotation in great depth. Yet some additional key insights shared by Ware, from the perspective of Eastern Orthodoxy, yet at the same time consistent with the Western Catholic perspective presented by Ratzinger and Dulles, are the following: First, the Eucharist creates the unity that it – more accurately, He – signifies.

Second, this unity, which shares a common terminology, is both sacramental and ecclesiological. That is, the communion found in Christ through the Eucharist also brings about and deepens communion between believers as a Church. Likewise, we as Christ’s body the Church consume Christ’s body and blood in the Sacred Mysteries. 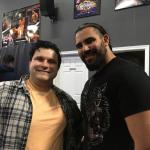